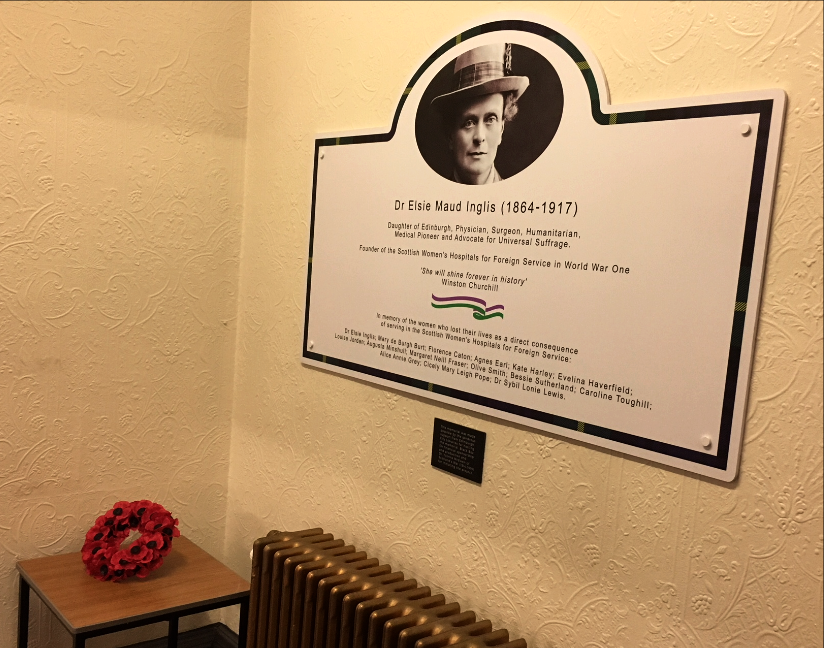 A memorial to pioneering doctor and founder of the Scottish Women’s Hospitals, Dr Elsie Inglis, was unveiled on Friday at Edinburgh Central Library, 100 years on from her death.

Members of Dr Inglis’ family were among the first to see the plaque on the library’s first floor landing commemorating her and the work of the Scottish Women’s Hospitals during World War One.

The memorial, organised by Scotland’s War Project in partnership with the libraries service, bears an inscribed quote from Winston Churchill on the renowned suffragist, reading: “She will shine forever in history” along with the names of the 15 women who died during their service in the Scottish Women’s Hospital.

It will complement an existing a roll of honour listing the nurses who fell in World War One on display in the library, which is also home to the original diary of Ethel Moir, who served with the Scottish Women’s Hospitals.

Councillor Ian Perry, Education, Children and Families Convener, said: “There is no doubt that Dr Elsie Inglis – war hero, pioneering medic, advocate of women’s rights – is a truly revered and treasured figure in Edinburgh’s history, so I am delighted that we have been able to honour her with this memorial.

“I’m sure we’ll see many people come through the doors of the Central Library to pay tribute to this inspirational former citizen and to remember the many sacrifices she made for the good of our nation.”

Dr Yvonne McEwen, Project Director at Scotland’s War Project, said: “Like many people, I assumed that there was some form of memorial to Elsie Inglis’ World War One contributions and was shocked to find out there wasn’t anything, so decided to work with like-minded people to raise funds for a physical memorial.

“Also, thanks to the terrific support of the Council and Black Box Productions, I’m delighted that we now have a memorial to such an incredible humanitarian and daughter of the city. I’m enormously proud of everybody’s achievement in making this a reality.”

Tony Waterston, Dr Inglis’ great, great nephew, added: “As a great, great nephew of Elsie Inglis I’m delighted to see the plaque installed in the public library. Just having returned from a family visit to Serbia, where most of Aunt Elsie’s war time work went on, I was hugely impressed and moved by the heartfelt expressions of respect and love for her and the Scottish Women’s Hospitals shown by Serbians of all ages and backgrounds. In today’s world we can learn so much from her example of international solidarity, advocacy for the vulnerable and feminism, and we certainly feel that in my family.”

The plaque’s unveiling is one of several commemorative events taking place across Edinburgh to mark the anniversary of the death of Dr Inglis, who was raised in the Capital where she would go on to establish a medical college for women and a maternity hospital for poor mothers on the High Street.

It was during World War One that Dr Inglis rose to fame, after spearheading the establishment of the Scottish Women’s Hospitals, providing all female-staffed relief hospitals across Europe and Russia to assist the Allied war effort.

View a collection of images and excerpts from the diary of Ethel Moir, who served with the Scottish Women’s Hospitals, on the Capital Collections website.