A group of exceptionally kind-hearted Kiltwalkers are at the halfway point of an incredible 100 mile charity challenge.

While more than 16,000 heroes will tackle one Kiltwalk this year, 11 brave Scots have gone a step further by taking on the biggest challenge of all – walking the marathon Mighty Stride of more than 20 miles at all 4 Kiltwalks in 2018. 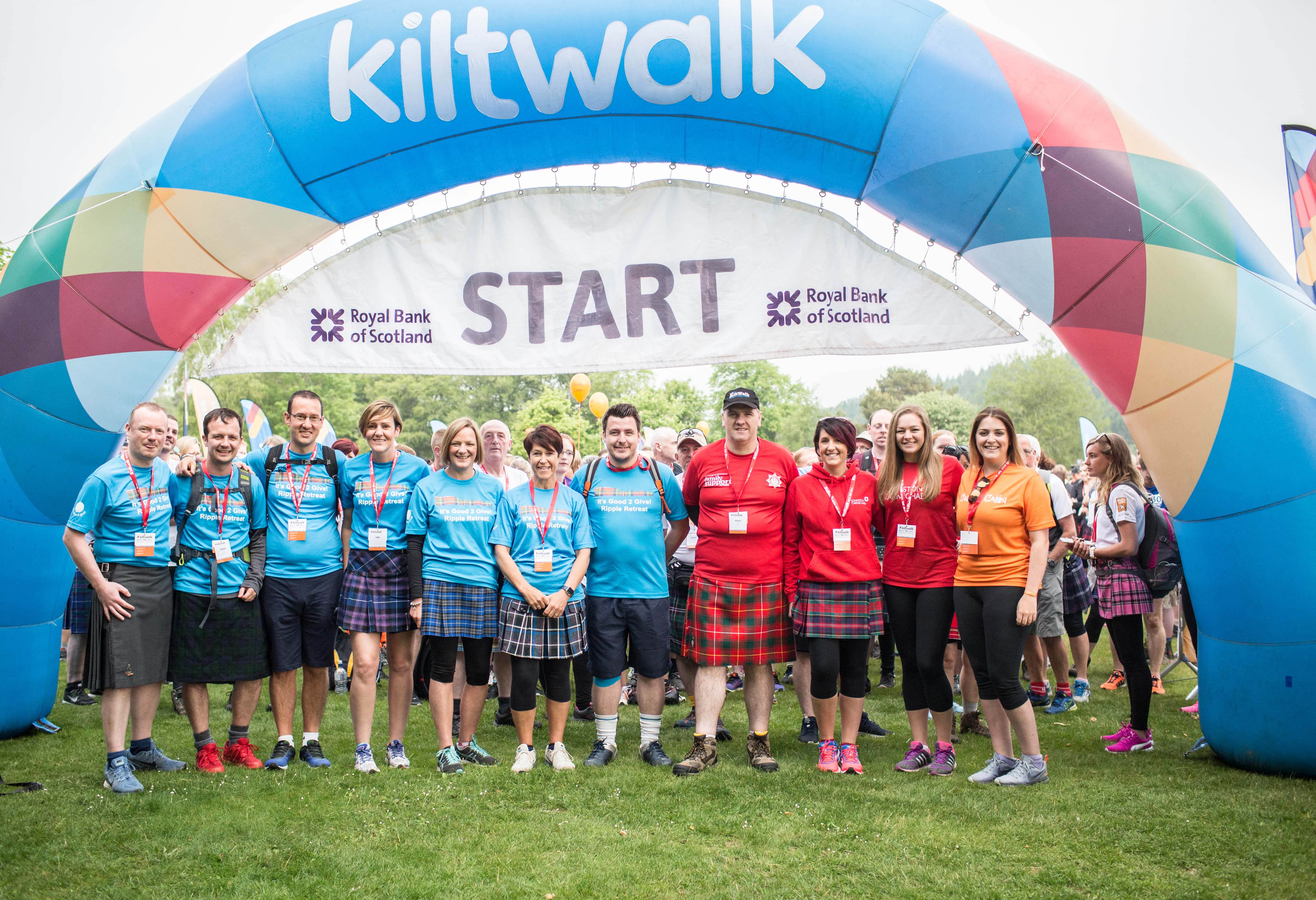 It’s all to raise money and awareness for charity, with seven walkers marching for cancer charity It’s Good 2 Give, one raising funds for Scottish Fire & Rescue Service Family Support Trust, and three representing Gold sponsor Johnston Carmichael, who will walk for Calum’s Cabin. All money raised will receive a 40% boost, thanks to the support from the Hunter Foundation and funds raised from the recent Michelle Obama Dinner.

At the end of April, this small band joined 10,157 others in the world’s biggest ever Kiltwalk from Glasgow to Loch Lomond. Last month, the north east was a sea of tartan as 2,300 walkers took part in the 26 mile Aberdeen walk from Potarch to Duthie Park.

Up next is the Mighty Stride from the 18th fairway at the home of golf in St Andrews to Monifieth for the Dundee Kiltwalk on August 19 and the final leg from Holyrood Park to BT Murrayfield in the Edinburgh Kiltwalk on September 16.

Shonagh Byrne from Dunfermline, who is a parent ambassador and will walk to raise funds for It’s Good 2 Give, said: “The charity offered incredible support to my daughter Evie, who passed away from cancer at 26 months old.”

It’s Good 2 Give offer practical support to young cancer patients and their families in Scotland including snacks on the ward, ironing vouchers and personal support from health professionals. Families can apply to stay at the Ripple Retreat, a retreat set in a tranquil location on the shores of Loch Venachar near Callander, to allow them to spend precious family time making memories together. In total there are five supporters walking all four locations for It’s Good 2 Give, including two trustees – Elaine Whellans and Susie Bradley.

Shonagh continued: “I’ve decided to walk 26 miles for the 26 months Evie was here with us. I am so determined to complete all four. Knowing that The Hunter Foundation tops up all the funds raised made it so easy to make the decision to take part. I’ve already raised over £3,000, and with the additional boost from the Hunter Foundation and funds raised at the Michelle Obama dinner, my £4,200 plus will have a very positive impact on a charity very close to my heart”.

Jillian Stewart, a business solutions assistant at Johnston Carmichael from Paisley, said: “This is my third year taking on the Kiltwalk and it was time to set myself a new challenge. It won’t be easy, but being able to say I walked 100 miles in all four of the events will fill me with such a sense of pride and accomplishment.

“This year, I am raising funds for Calum’s Cabin, a holiday retreat on the Isle of Bute which does incredible work for children and families of children suffering with cancer. My personal target is to raise £500 to add to the £5,000 already raised for the charity by Johnston Carmichael staff.”

Paisley based Craig McFie, walking for Scottish Fire and Rescue Service Family Support Trust said: “As a firefighter myself, I’ve seen first-hand how important it is that retired fire service personnel and their families are given support in times of need.

“I initially wanted to do three walks for the three regions Scotland’s Fire and Rescue Service is split up into. If I was going to take on three, I may as well do the whole lot!”

Paul Cooney, Chief Executive of the Royal Bank of Scotland Kiltwalk said: “We are very proud to have 11 Kiltwalkers taking part in all four walks this year. It’s a tremendous effort and will undoubtedly make a huge difference to their chosen charities.

“The first two walks in Glasgow and Aberdeen have been outstanding, and we can’t wait to hold the next two in St Andrews to Dundee and Edinburgh. Let’s make them the biggest yet and remember, when you register and raise funds you could win one of two brand new Vauxhall Corsas 1.4 Sri from our Platinum Sponsor, Arnold Clark

“Taking part in the Kiltwalk not only helps around 1,000 charities across Scotland, but also gives our walkers a huge sense of achievement. If you’re still thinking about taking part in the last two remaining Kiltwalks, there is still plenty of time to don your tartan and sign up!”

Next up is the St Andrews to Dundee Kiltwalk on 19 August and, finally, Edinburgh on 16 September. With three distances to choose from, there’s a walk to suit people of all ages and abilities.

To sign up for the two remaining Royal Bank of Scotland Kiltwalks this year, visit www.thekiltwalk.co.uk