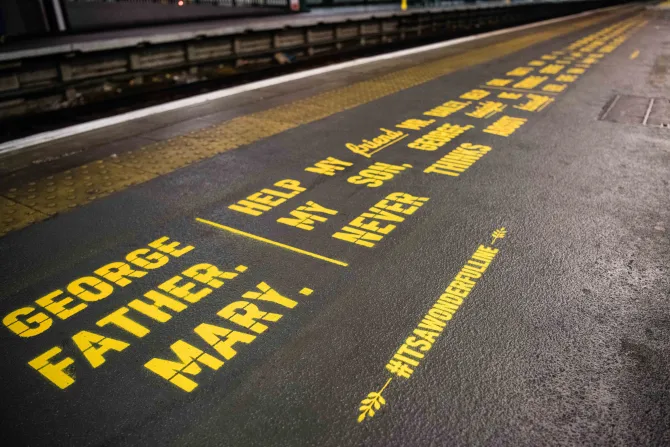 -Virgin Trains to paint the script of heart-warming Christmas classic, ‘It’s a Wonderful Life’, along the length of its route from London to Glasgow

-The initiative seeks to show how powerful simple acts of kindness can be, particularly around Christmas

-The script will be 7.5km long and painted next to the yellow line along platforms running the length of the Virgin Trains route

-The final lines, which include the cast singing Auld Lang Syne, will be painted at Glasgow Central during December

Frank Capra’s 1946 film, which is a staple of the Christmas TV schedules, is an uplifting story of family, love, hope, and redemption. But it is also the story of one man’s struggle with a life that hasn’t gone to plan. While the film may be over 70 years old, the message is as relevant now as it has ever been.

The ‘It’s A Wonderful Line’ initiative has been developed with Virgin Trains’ charity partner, Rethink Mental Illness, in recognition of how difficult the festive period can be for some, and the positive impact that simple acts of kindness can have. The campaign will direct customers – via a URL embedded in the script – to information, advice, and support around mental health.

The initiative will be rolled out along the Virgin Trains West Coast route, with the film’s message of goodwill painted across station platforms in towns and cities that include; London, Birmingham, Liverpool, Manchester, Preston, Carlisle and Glasgow.

Over 7.5km of script will be painted over 14 nights in 14 locations, all of which are listed below along with the date the script will be on the platform.

Rethink Mental Illness has worked with Virgin Trains since May 2017, training its people in how to deal with mental health issues that they might experience during their working day and in their personal life. This includes encouraging colleagues to talk about mental health, providing best advice on where to seek help and better equipping them to identify and support other people, such as passengers, who might be struggling.

“It’s A Wonderful Life is a story of hope, redemption and kindness, which teaches us that having someone there for you when you need it the most is one of the greatest gifts you can receive. Many of our people have been personally affected by the issues raised in this campaign or know someone who has been. This is why we wanted to get as many of our staff involved as possible, working to create a message of kindness that will touch as many of our customers as we can. We want everyone to know there’s help out there, and that if you’re not affected by poor mental health, it’s really easy to help someone who is.”

“It is vital at this time of year to let people know that help is available if they need it. We have worked closely with Virgin Trains for the last two years to help raise funds so that more people can access support in communities along the West Coast network. This campaign highlights the need for this support at a time of the year which can be difficult for some of us, and we are proud to be part of it.”

“The ‘It’s A Wonderful Line’ initiative being delivered by Virgin Trains and Rethink Mental illness is another great example of the rail industry seeking to support those in need in the communities it serves. It is especially poignant at this time of the year when some of the most vulnerable in society can find themselves particularly isolated. It is to be hoped that upon reading the lines from the film or even watching it, passengers will remember that from time to time everyone needs a little help and that they will be inspired to give it when the time presents itself.”

Throughout December, customers will also be able to watch ‘It’s A Wonderful Life’ on ‘Beam1’, Virgin Trains’ on-board free entertainment service. Volunteers from Rethink Mental Illness will also be fundraising at Virgin Trains stations throughout the campaign period.

All of the painting will be completed by Bagnalls, Virgin Trains’ painting partner of 10 years, with help from Manchester-based Laser Cutting Services which custom-manufactured the stencils for the painting.

For more information about Virgin Trains and the ‘It’s A Wonderful Line’ campaign please visit https://www.virgintrains.co.uk/its-a-wonderful-line