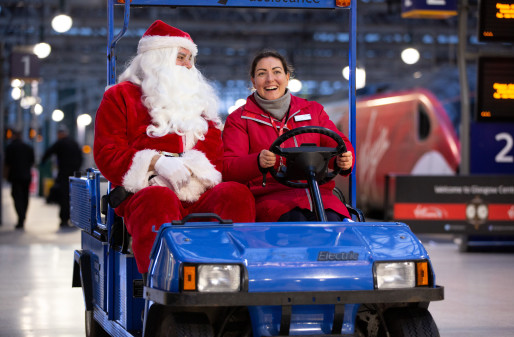 The number of people taking advantage of reduced day return fares from the North of England in the run up to the festive period has grown by more than a quarter in just three years.

On the back of this success, Virgin Trains has cut the cost of a day return “Shopper” ticket to Glasgow by a third, valid on any train after 9.30am.

The number of people making planned festive trips from Northern England has also surged. Last December, the number advance journeys in December between Glasgow and Preston, Lancaster and Cumbria rose to 5700 a week, nearly a third higher than in 2013.

Michael Stewart, Virgin Trains General Manager for Anglo-Scottish services, said the growing reputation of Glasgow as a shopping and leisure destination and faster train journeys was drawing more people to visit from as far as Preston.

“Glasgow’s world class shopping, Christmas markets, attractions and atmosphere makes it the perfect day out and we are seeing lots more people from the north of England taking advantage of our reduced fares in the run-up to Christmas. With three Virgin Trains services every two hours to Glasgow, it’s a quick and enjoyable way to visit Scotland’s biggest city,” he said.

In recent years, Glasgow has cemented its reputation as a festive destination, with heavily-attended popular Christmas markets established in its George Square and St Enoch Square alongside the city’s world-famous “Style Mile” retail district propelling Glasgow to the position of the UK’s leading shopping destination outside of London.

Throughout December, visitors to Glasgow city centre can benefit from late night shopping at more than 1500 shops and an exciting programme of fun events for all the family as part of Glasgow Loves Christmas, the city’s annual festive marketing campaign managed by Glasgow Life.

Councillor David McDonald, Chair of Glasgow Life and Depute Leader of Glasgow City Council, said: “We welcome Virgin Trains’ ongoing commitment to Glasgow and we’re delighted that this great value offer will once again make the city even more accessible to leisure visitors from the North of England throughout the festive season. As the success of this joint promotion shows, flexible, affordable rail travel together with a compelling destination offering is a winning combination for Glasgow. As the UK’s largest and most successful shopping destination outside London with a huge selection of world-class brands and retailers we’re confident there’s something to suit every shopper and budget. Together with a packed programme of magical events and festive fun, it’s true that Glasgow Loves Christmas like nowhere else.”

Book your ticket now at www.virgintrains.co.uk.