The winner of this year’s Britain’s Got Talent will be taking to the stage at the Edinburgh Fringe Festival alongside some of television’s favourite comedians to help raise thousands of pounds for the UK’s leading children’s charity Barnardo’s.

The Lost Voice Guy is one of many comedians taking part in the Barnardo’s Big Comedy Benefit, which previews some of the top Fringe acts and has raised more than £44,000 to help our UK-wide services support vulnerable children and young people since 2012.

The two-hour show will take place at the Edinburgh International Conference Centre’s Venue 150 on Wednesday 8th August from 8.30pm.

It will include household names from television and stand-up such as Russell Howard, Tape Face, David O’Doherty, Pete Firman, Zoe Lyons, Jo Caulfield and Noise Next Door. 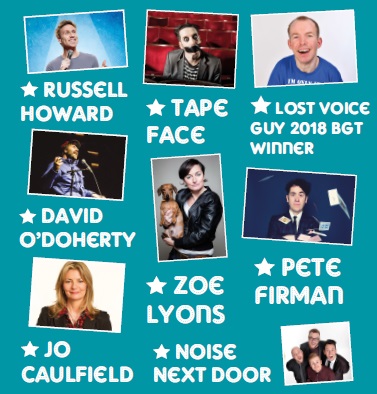 The Lost Voice Guy, whose real name is Lee Ridley, took Britain’s Got Talent by storm earlier this year, with his unique and self-deprecating sense of humour. Lee, who has cerebral palsy, is unable to speak so delivers his act through a voice synthesiser.

He said: “I’m really excited to be performing at Barnardo’s annual comedy benefit. As a charity, they give a voice to kids who don’t have one and boy do I know that feeling. Please come along, it’s going to be a fantastic night!”

Russell Howard, who regularly appears on television with programmes such as The Russell Howard Hour on SKY, can’t wait to get on stage.

He said: “I adore Barnardo’s and everything that they do – especially this comedy benefit. I’ve been working with them for a few years now and I really can’t wait to come back and play this show again in an even bigger venue!”

Tape Face, who is known for his silent comedy acts and for literally taping his mouth shut in shows, also performed last year and is pleased to be supporting Barnardo’s again.

He said: “It’s such an honour to be asked to perform at this event again for Barnardo’s. They’re a fantastic charity doing fantastic things for vulnerable children and young people. Please get your tickets and I’ll see you there!”

Jo Caulfield, who has been a great supporter of the Big Comedy Benefit since it began in 2012, hopes to get the audience roaring with laughter with her quick wit and razor sharp observations.

The Big Comedy Benefit is sure to delight comedy fans, who will also be happy in knowing they are also supporting vulnerable children across Scotland at the same time by attending.

“It is a great opportunity to see some of the best acts from this year’s Fringe and the money which is raised really will make a difference to the lives of thousands of vulnerable children, young people, parents and carers we support across Scotland.”