THE BALMORAL UNVEILS NEW TARTAN AS DESIGNED BY KINLOCH ANDERSON, TARTAN EXPERTS SINCE 1868 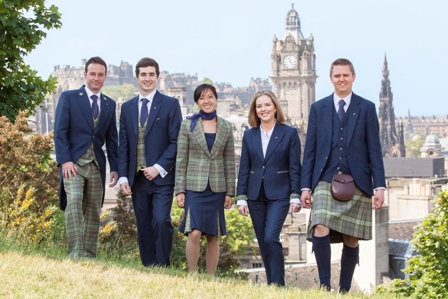 The Balmoral, a Rocco Forte Hotel, has unveiled a new tartan uniform, bringing a lighter, contemporary design to the hotel’s door staff, concierge and front of house team. The hotel worked with Kinloch Anderson, Tailors and Kiltmakers to The Royal Family, for over 18 months to create the new design which was inspired by the natural landscape of Edinburgh and Scotland. Yarn colours in heather, moss, thicket, zest, greenfinch and rave were selected in a light tweed. The colours reflect the stunning views of Arthur’s Seat, the Old Town and Princes Street Gardens which can be seen from The Balmoral.

The new tartan, called ‘The Balmoral Hotel Edinburgh Tartan’, was officially registered in the Scottish Register of Tartans today and will showcase a modern tartan design to the thousands of guests who visit the hotel for many years to come.

Commenting on the new tartan design, Hotel Manager Harry Fernandes, said: “We wanted the new tartan to tie in with the inspiration behind the hotel décor and showcase a modern, elegant twist on tartan design. The new design also complements the hotel lobby which was designed with Edinburgh and Scotland in mind by Rocco Forte Hotels’ Director of Design, Olga Polizzi. “It has been a fascinating project and a real pleasure working with Kinloch Anderson who have been incredibly passionate about about bringing our vision for our new attire to life.”

The Balmoral previously collaborated with Kinloch Anderson in 1991 to develop a tartan for the hotel’s rebrand from the North British Station Hotel to The Balmoral. The original tartan, called ‘Balmoral Hotel Tartan’ has been showcased by the doormen of the hotel for over 24 years and will continue to be part of the history of the grande dame of Princes Street. John Kinloch Anderson, Chief Executive of Kinloch Anderson, added:

“We are delighted to continue our longstanding relationship with The Balmoral and have enjoyed working together to create a tartan and uniform befitting of the uniqueness that is this iconic landmark property.”