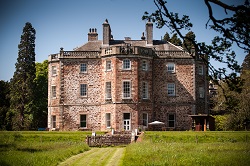 A group of media and film students from Queen Margaret University has used its creative talent to promote one of Scotland’s most respected respite care facilities.

The 2nd year students created a series of short promotional films which capture the spirit of Leuchie House national respite centre in North Berwick for people living with long term conditions such as multiple sclerosis, Huntington’s, Parkinson’s and cerebral palsy.

The project was part of a media module ‘Working in the Media’ in which groups of students work with small local businesses, social enterprises or charities to develop an agreed media product such as a short promotional film, marketing materials or a social media campaign. 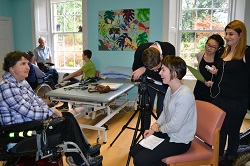 The series of films captures interviews with people who have benefited from a much needed respite break at Leuchie House, which is located in an impressive country house just outside North Berwick.

Lorraine Hunter, Marketing and Communications Officer for Leuchie House, explained:  “We wanted a series of video clips featuring a range of guests, carers, staff and volunteers, which would convey what we call ‘the Leuchie effect,’ the positive impact of a break at Leuchie, which lasts long after guests leave.

“The video clips will be a very useful addition to the resources on our website, helping people understand what Leuchie House is all about and how a break here could make a real difference to them.”

Denny Collie, Lecturer in Creative Enterprise at Queen Margaret University, said: “We are pleased that our ‘Working in the Media’ module is proving to be a such a hit with local charities, social enterprises and small businesses in East Lothian and Edinburgh. It is an excellent way for the University to engage with community groups and for our students to gain hands on practical experience in film and media and develop their communication and group work skills whilst building their work portfolio.”