A new campaign by the City of Edinburgh Council aims to combat the problem of inconsiderately-parked vehicles blocking bins meaning they can’t be emptied and overflow. 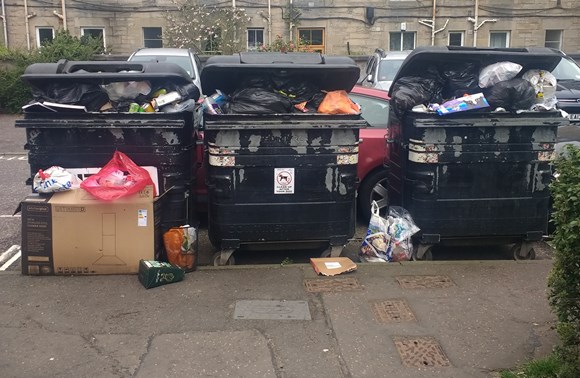 From this week, waste collection crews are teaming up with colleagues in parking to raise awareness of the issue, with offending vehicles receiving an information leaflet designed to resemble a parking fine, warning that such parking could incur a £60 parking ticket or the car being towed away.

One communal bin can service up to 26 households. When it isn’t possible to access the bin to empty it, this can delay or even prevent collections altogether. And when the bin inevitably overflows, it leads to unsightly and unhygienic flytipping and litter, spoiling the look and feel of residential streets.

Double parking in front of a bin can also put people’s lives at risk as emergency services may be unable to access the street.

Transport and Environment Convener Councillor Lesley Macinnes said: “We’re running this campaign to raise awareness of an issue which causes real problems for our bin crews because they can’t complete their rounds when bins are blocked by parked vehicles. Unemptied bins inevitably overflow and lead to increased litter and flytipping. This is about basic common sense and consideration for others at the end of the day. It’s also a very real question of safety – if you block access to the street for bin lorries, you’re also potentially blocking ambulances and fire engines from getting to emergency call-outs as well.

“We’d urge anyone who spots an inconsiderately parked car to report it to us via 0131 469 5400 or parking@edinburgh.gov.uk.”

The bin parking campaign will include: