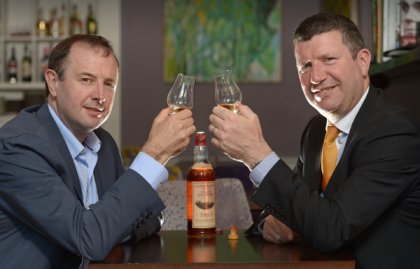 One of Edinburgh’s newest boutique hotels, 24 Royal Terrace, is rapidly building up a reputation for its whisky collection as well as the fabulous art on display. In their cabinet they have an original bottling of Glenmorangie 1963, one of the rarest and most sought-after Glenmorangie bottlings due to its history, rarity, and taste. On the 1st June Scott (in his role as President of The Edinburgh Chamber of Commerce) and Gordon Dewar, CEO of Edinburgh Airport, together with Chris Hoban of the Edinburgh Whisky Blog had the enormous privilege of uncorking the spirit!

The tasting notes for the Glenmorangie 1963 now no longer remain blank as Chris Hoban put pen to paper to give us his own after the tasting. Does it live up to its reputation? Scott, Gordon and Chris certainly thought so. The Glenmorangie 1963 is strong on the nose but with a light slightly sweet taste which lingered warmly.

Remember though – three down there are only twenty-seven drams left! 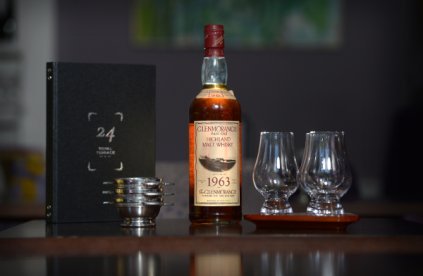