The record-breaking figure was announced as ScotRail Alliance Managing Director Alex Hynes joined Poppyscotland volunteer Martha Dickson, who has collected donations in and around Haymarket station in Edinburgh for 67 years. 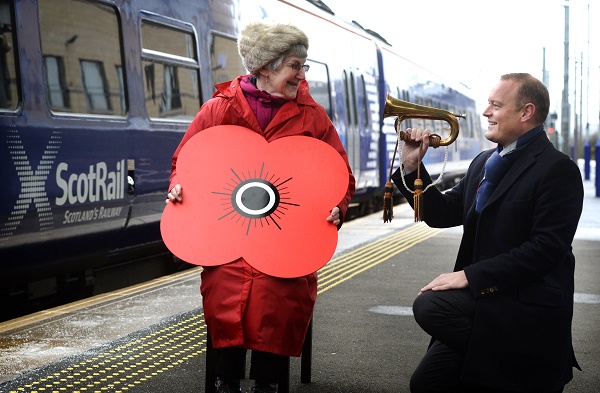 The final total of £95,293 includes donations from ScotRail customers, free on-duty travel for Poppyscotland staff across the ScotRail network, and access to station advertising spaces.

For the first time, collection tins were placed at all ScotRail ticket offices, and collectors were welcomed into four of Scotland’s biggest stations – Glasgow Central, Glasgow Queen Street, Edinburgh Waverley, and Haymarket – in the run-up to Armistice Day 2017. ‘Poppy-up’ shops, which sold Poppyscotland merchandise, also opened at Glasgow Central and Haymarket.

Five trains had their ScotRail branding replaced with a new poppy-themed logo in support of the charity, and one lucky rail enthusiast landed a one-hour session on ScotRail’s state-of-the-art driver training simulator, after bidding £505 in a charity auction. 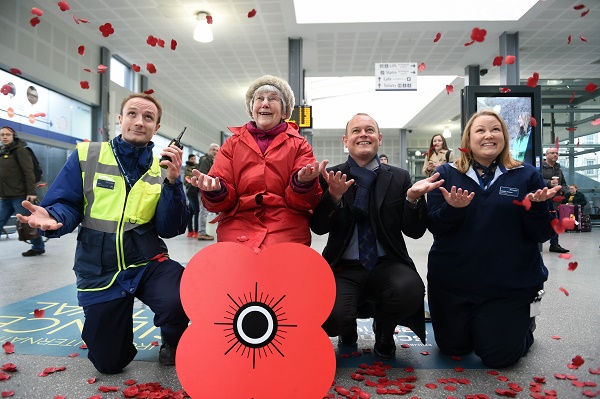 “I am delighted that the ScotRail Alliance raised more than £95,000 for Poppyscotland and the vital work it does for Scotland’s soldiers and veterans. To have increased the amount we raised by 50 per cent in just one year is a sign of the generosity of our people and our customers.

“It’s an honour to be able to support this fantastic charity, which needs our support all year round.”

“My uncle died during the First World War and another uncle was gassed in the Second World War. He survived, but was left badly affected. When I reached the age of understanding, I would often see a family friend who was still serving and would later die in service. It sounds an obvious thing to say, but I didn’t like wars and I hated the sound of the air raid siren when I was little and it would go off.

“The majority of people do not want war, of course, but the reality is that we have to contend with what happens when there is a conflict and the aftermath of that. That’s where Poppyscotland comes in, and when I am out collecting I try to tell people how their money helps.”

“This fantastic amount raised will allow Poppyscotland to make a life-changing difference to the Armed Forces community over the coming year.

“The ScotRail Alliance has once again set the standard in how organisations can support our vital work, and we are extremely grateful to all of the staff and customers for their incredible contribution. It is also fitting that we are able to pay tribute today to Martha for her decades of dedication collecting at Haymarket.”