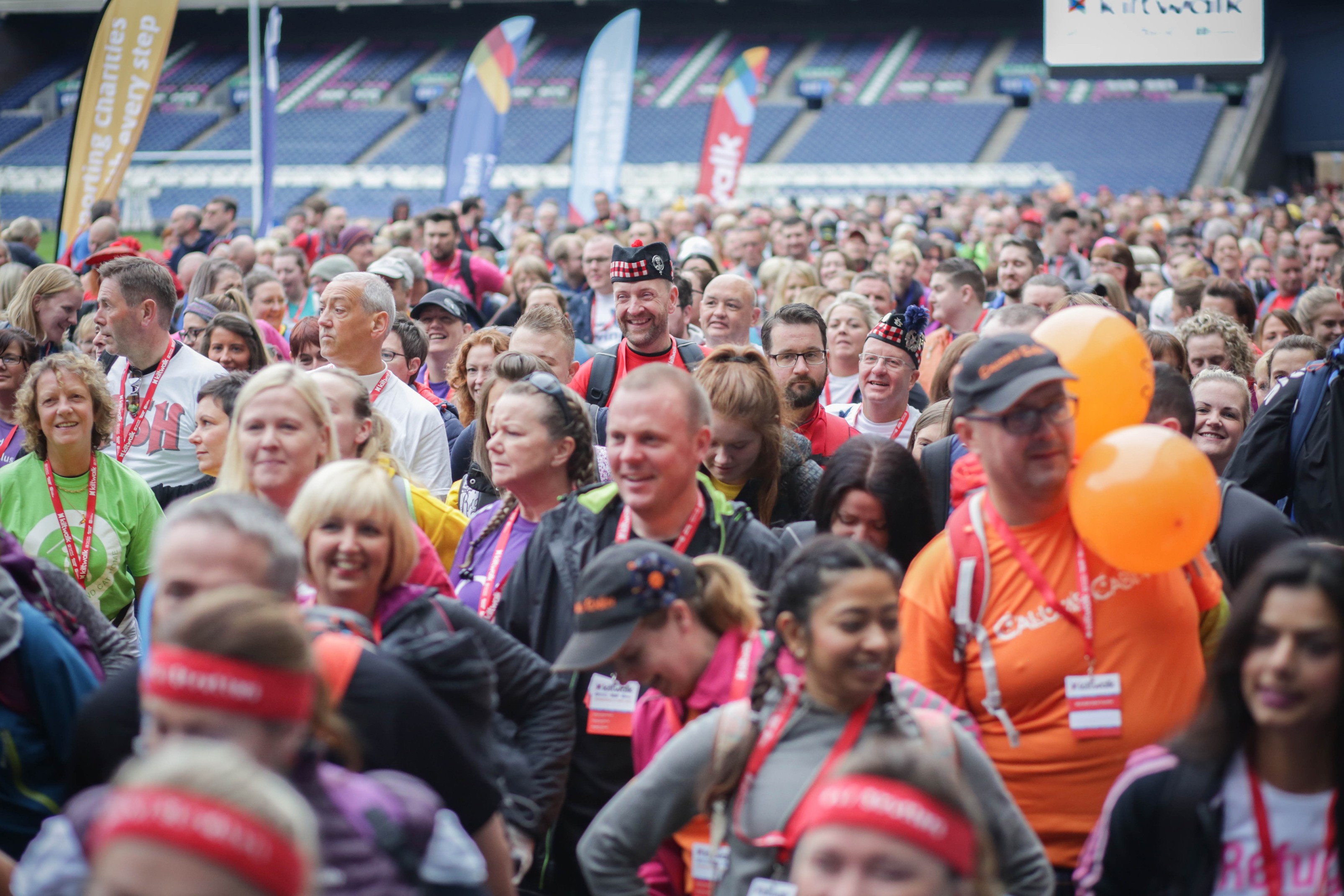 On Sunday, around 3,000 people took to the streets of Edinburgh for this year’s final Royal Bank of Scotland Kiltwalk to raise funds for walkers’ chosen charities.

Sir Tom Hunter, the man with the vision to turn the Kiltwalk into Scotland’s biggest mass participation event for charity, praised Edinburgh Kiltwalkers for their commitment to good causes across Scotland.

Sir Tom said: “I am overwhelmed by the energy and enthusiasm displayed by each and every person who took part in the Royal Bank of Scotland Kiltwalk. Their dedication and determination to raise funds for charities big and small is admirable. The atmosphere in BT Murrayfield and on the route today was nothing short of extraordinary.”

Thanks to the generous 40% fundraising boost pledged by Sir Tom and the Hunter Foundation, charities will receive a 140% return for every penny raised by walkers. Whilst Platinum Sponsor Arnold Clark has donated a brand new Renault Clio at each event this year, meaning one of the lucky 3,000 Kiltwalkers will win a new set of wheels.

Sir Tom was at each of the starts to cheer on Kiltwalkers as they set off. Leading out Edinburgh’s Mighty Stride was 51-year-old Lynne McKenzie from Elgin who was walking for charity CHAS.
Whilst leading the way for the Big Stroll was 45-year-old Julie Whyte from Dunfermline who was joined by her 11-year-old daughter Abigail who was diagnosed with arthritis when she was just four. They were walking for the Edinburgh Children’s Hospital Charity and Scottish Network for Arthritis in Children (SNAC).

Julie said: “I am so proud that Abigail and I led out the Big Stroll today. She has attended the Royal Hospital for Children and Young People for treatment every four weeks since she was diagnosed and they have shown her so much support over the years. Abigail saw the Kiltwalk was coming to Edinburgh and she wanted to take part and give something back.”

Finally, leading the way for the Wee Wander was mother and daughter, 33-year-old Jeannette Smith and nine-year-old Lucy Abbeels from Edinburgh. They were fundraising for Spina Bifida Hydrocephalus Scotland as Lucy was born with Spina Bifida and Hydrocephalus. Also joining them was ENABLE Scotland’s patron and sport TV anchor Hazel Irvine.

With more than £1.3 million already distributed to charitable causes from the Glasgow Kiltwalk alone, the total raised across the 2017 Royal Bank of Scotland Kiltwalks will increase after the fourth and final event held today.

More than 700 charitable organisations are set to benefit as the Kiltwalk is now open to every charity. Funds raised by those who choose to walk for the Kiltwalk itself are distributed through the STV Children’s Appeal as the official grant making partner.

Volunteers also got in on the fundraising action, as for every hour of time they donated, Sir Tom Hunter and the Hunter Foundation will gift £1.10 to each Kiltie’s chosen charity.

To find out more about the Royal Bank of Scotland Kiltwalk visit www.thekiltwalk.co.uk