Garry Fraser, self-proclaimed “schemie”as a former heroin addict who once believed the best he could hope for was a life in prison, has landed a job as a filmmaker on one the most eagerly awaited sequels of all time. 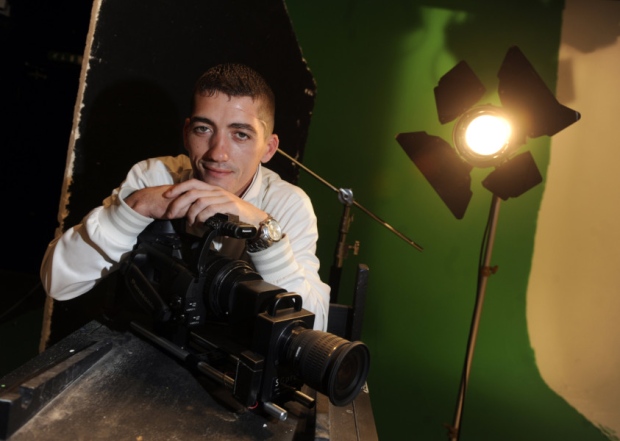 The Bafta-winner from Muirhouse will be shadowing Danny Boyle on Trainspotting 2 after the Oscar-winner personally offered him a job. The director of the original cult classic was impressed by Garry’s work after watching his hard-hitting documentary Everybody’s Child and attending his film workshops in the city. The offer also came about because Garry is friends with Irvine Welsh and is working with the Trainspotting author on several unrelated film projects.

He said: “Irvine Welsh has been a really good friend to me. We are both from Muirhouse and he’s knocked down doors for me and been really supportive. He messaged me and said Danny Boyle wants to speak to you, so I said ‘tell him to give me a call. I was standing in the kitchen frying an egg when he phoned. He said he was really interested and wanted to find out more about my life. He was a really nice guy and a hero of mine. I invited him across to one of the workshops and it gave the group a real buzz to have an Oscar-winner there. And Danny had never seen anything like what we were doing.”

A few weeks later the Slumdog Millionaire director phoned him again to offer him a job as second unit director. Garry will be working behind the camera with a crew under his supervision when filming begins next month. Garry sees the role as an opportunity to learn his craft and help other budding filmmakers to realise their potential. He added: “Because I work in social enterprise, I know that when the spotlight falls on me, it also falls on them.”

The 37-year-old runs a workshop for actors of all ages who meet for rehearsals at the Serenity Cafe on the Royal Mile. At least 5 of the group have also auditioned for acting roles on Trainspotting 2, waiting to learn whether they have been successful. But Garry believes they may have a better chance than some professionals because of their life experiences. He said: “Some of them are recovering drug addicts from areas like Muirhouse so they don’t have to act – they just have to be themselves.”

Garry believes the experience will provide the perfect grounding for his work with Welsh. He will direct on a feature called The Muirhouse Incident based on 2 of the author’s short stories as well as a drama series called The Grey Area. He discovered his talents during an HND film course at Edinburgh College in 2006 and is now a well-respected director renowned for his gritty urban documentaries.