Report published on the economic impact of Scotland’s Colleges

The principals of Scotland’s two largest colleges have highlighted the strengths and potential of the sector in a report which makes plain the economic impact of colleges in Scotland. The Cumberford-Little Report, One Tertiary System: Agile, Collaborative, Inclusive – was commissioned by the Scottish Government to consider what more Scottish colleges can do to help improve businesses’ performance and productivity. It was co-authored by Edinburgh College Principal and CEO Audrey Cumberford and City of Glasgow College Principal and CEO Paul Little. 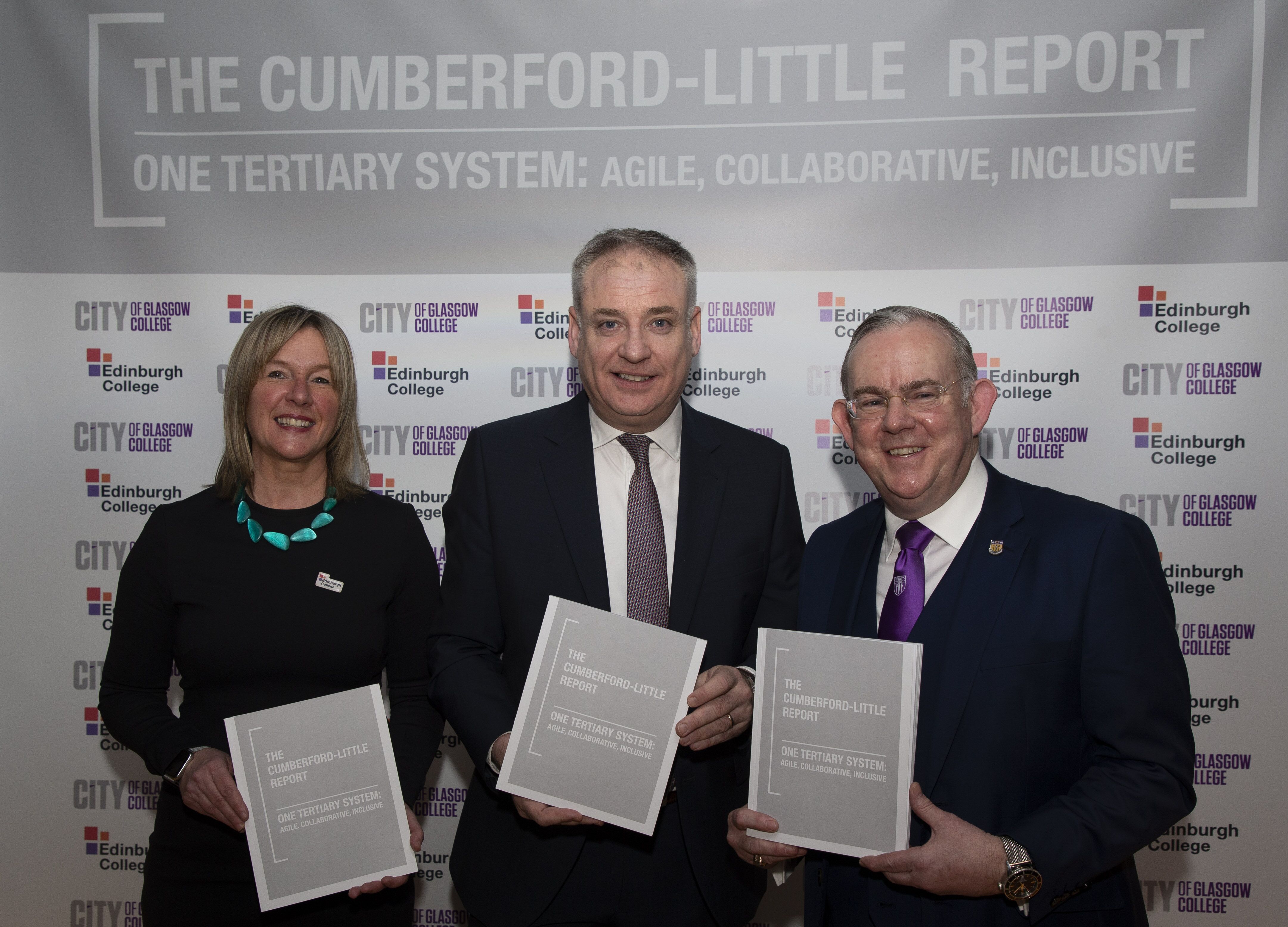 The findings identify the significant economic impact colleges already have – a £3.5bn annual boost to GDP according to the latest figures – and identify how colleges support a wide range of Scottish Government national priorities, highlighting examples of best practice across Scotland. The authors also make a series of recommendations aimed at allowing colleges to make a still greater contribution to business growth, particularly among Scotland’s huge SME and micro-business communities in an economic environment where the full challenges of Brexit are yet to become clear.

“Scotland’s colleges represent a huge national asset and so we were delighted to be asked to undertake this review to highlight the important role of our colleges. Whilst our findings show the significant contribution that colleges make across the country, we cannot overstate the importance of creating an environment that supports an immersive symbiotic relationship between colleges and industry. In the report we address the challenges and constraints, which need to be overcome to enable us to realise our full potential. Together with peers and partners, we absolutely believe our colleges can tackle the challenges – and seize the opportunities – that lie ahead for Scotland.”

“Scotland’s colleges represent a huge national asset – yet their economic impact is not widely understood, nor recognised – despite very significant government investment. We think colleges’ multiple roles and diverse responsibilities sometimes combine to make it difficult to describe what they’re for – so we propose a refreshed purpose for colleges that is unambiguously focused on helping businesses to grow by making sure they have access to people with the technological, vocational, and ‘meta’ skills needed in the decade ahead – and beyond.

“We also say we need a fresh approach to how colleges are funded and how their success is measured so as to incentivise a business-focussed approach. And, since colleges thrive in a system, not a hierarchy, we make clear that, building on the Government’s plans to reform the learner journey, our proposals need to be anchored in a fully connected and collaborative system of pre- and post-16 learning.”

“Today’s publication – authored by the principals of Scotland’s two largest colleges -showcases some of the excellent work already taking place right across the country’s thriving college sector to support our learners, communities, and businesses. Essentially it makes plain the existing strengths and huge potential of a sector, which has an increasingly powerful impact on the Scottish economy as a whole.

“Since 2007, the Government has invested more than £8 billion in our colleges, and in last week’s draft Budget we proposed allocating over £670 million in total for resource and capital in 2020-21, underlining just what an important national role they play.

“The recommendations made in this report set out ambitions for an agile, collaborative, inclusive and dynamic college community. They include those aimed, particularly, at making an even greater contribution to Scotland’s huge SME and micro-business communities – very timely indeed, in an economic environment where the full challenges of Brexit are yet to become clear.

“We look forward to considering all the recommendations in detail, and responding in due course.”