The first recipient of a scholarship which commemorates the life and work of leading Scottish lawyer Kirk Murdoch has been named.

Demi Scorfield, 20, a law student at the University of Edinburgh, will be supported throughout her third and fourth year undergraduate course and will be offered summer internships at legal firm Pinsent Masons, where the late Kirk Murdoch was chairman of the Scotland and Northern Ireland operations. 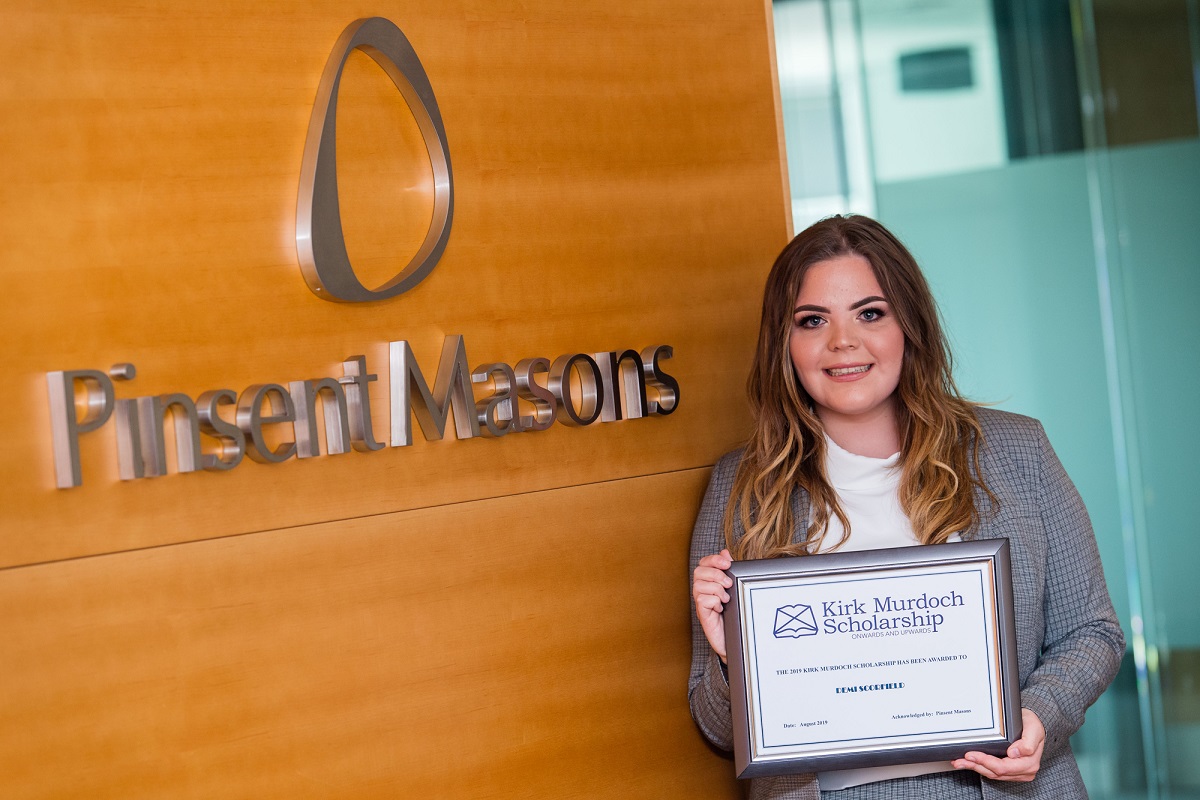 The Kirk Murdoch Scholarship (KMS) is supported by the Lawscot Foundation, a charity established by the Law Society of Scotland to help academically talented students from less advantaged backgrounds to access a career as a solicitor.

In addition, the scholarship provides further support when Demi undertakes the post graduate diploma in Professional Legal Practice, which is required to qualify as a solicitor or advocate. She may also be offered a legal traineeship at Pinsent Masons, one of the UK’s largest law firms, on meeting certain criteria.

One of Scotland’s most distinguished lawyers, Kirk spent more than 40 years in senior roles with McGrigor Donald and latterly Pinsent Masons after a 2012 merger. He was recognised as a natural leader and widely respected and admired for his support and encouragement of those around him to reach their full potential . 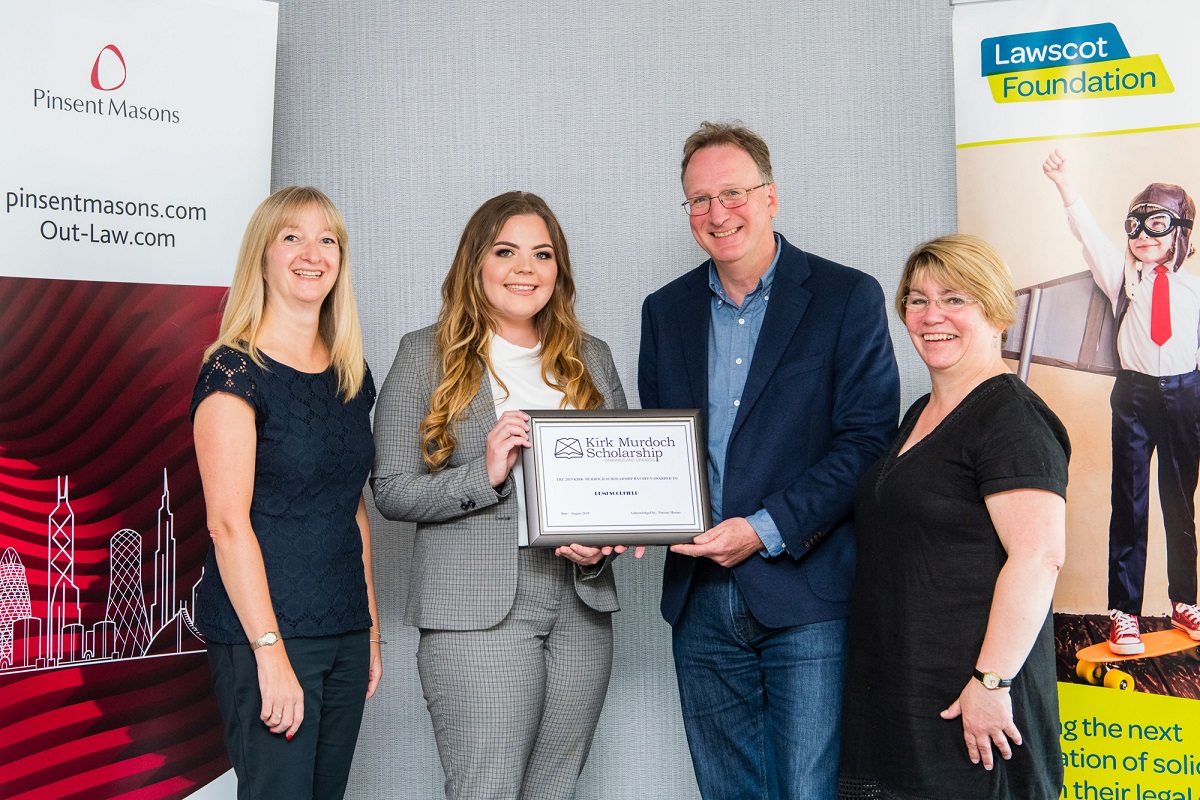 Demi, from Leith, Edinburgh, said: “I researched Kirk’s career and heard about his many qualities from colleagues who knew him well so I am honoured to receive a scholarship in his name. The different elements of support will make a big difference as I progress through my law degree and I know how competitive it is to obtain a summer internship in a legal firm, so I am very excited at this great opportunity.”

Richard Masters, who succeeded Kirk as Pinsent Masons chairman for Scotland and Northern Ireland, said: “The Kirk Murdoch Scholarship is a fitting tribute and a lasting legacy for a man who went out of his way throughout his career to help others to progress and to make the best of their opportunities. I have met Demi a number of times and I can tell she will be a fitting recipient of this award and we sincerely hope she will go on to become our first KMS trainee solicitor within the firm.” 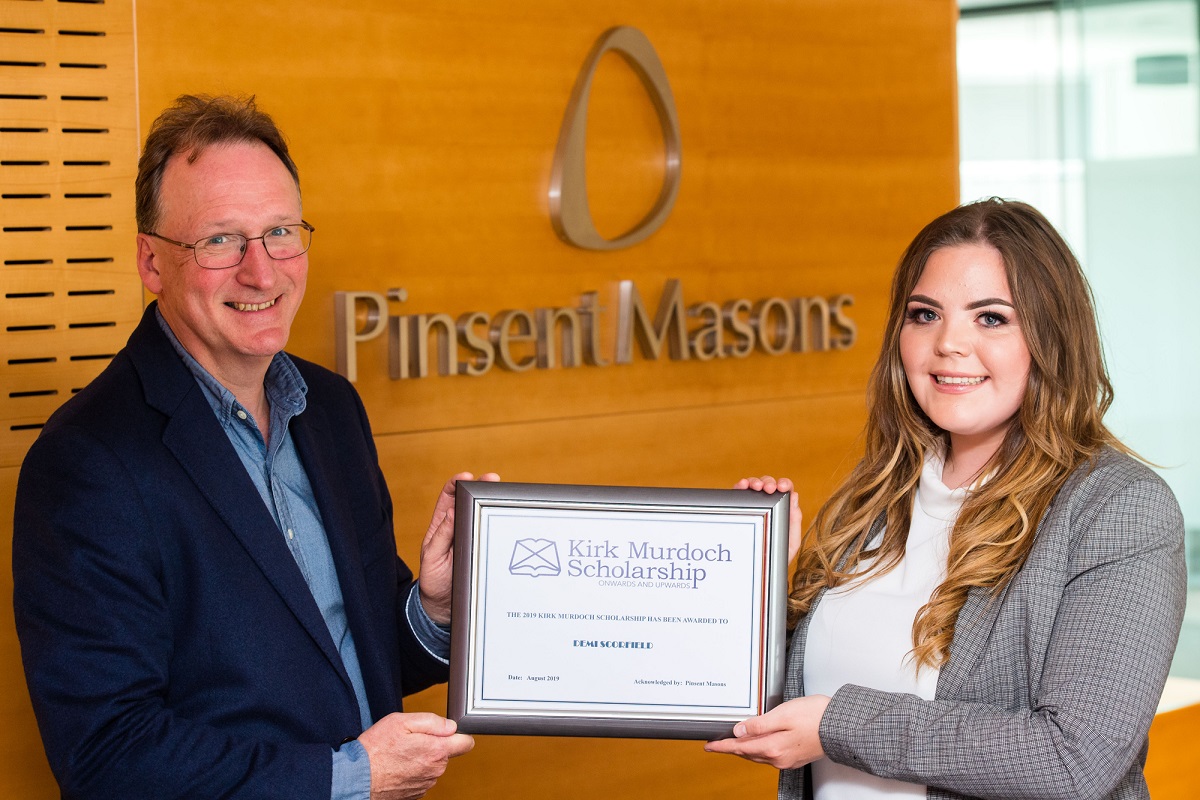 Katharine Hardie, a partner in the firm and close colleague of Kirk’s said: “As a business we believe strongly in supporting and increasing social mobility at all levels within the legal profession. I know Kirk would be very happy to see young people like Demi being supported, in his name, to achieve her dearly held ambition to have a career in law.”

Liz Campbell of the Lawscot Foundation said: “The Kirk Murdoch Scholarship is life changing and Demi is extremely deserving of the extra funding and support. Her drive and ambition has been incredible, which sets a great example for those considering a career in the Scottish legal profession.”