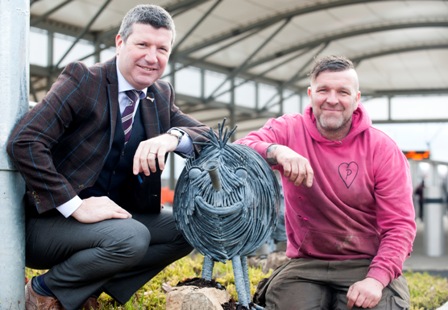 A pair of larger than life haggis were unveiled today at Edinburgh Airport but the female of the species – identifiable by her long eye lashes and curly tail – ran off in the direction of Edinburgh Trams.

There have been unconfirmed sightings of female haggis Flo on the Edinburgh Trams and Dougal – the male haggis who is slightly larger – is reportedly heartbroken.

“Dougal has been an absolute pleasure to work with but Flo is a feisty wee sow – and to be honest I’m not surprised she’s gone awol.

“Poor Dougal is heartbroken and has been reciting Rabbie Burns inspired poems in a bid to try and convince Flo to come back to him; but she’s wild, so who knows what will happen. I only hope she won’t end up on plate being piped into a Burns Supper tonight.”

“At 10:40 today a female haggis scampered off in the direction of the Edinburgh Tram station. We would encourage passengers and the general public to not be fooled by her long lashes and advise that they do not try to approach her.”