The judges who have selected the shortlist for ‘Scotland’s Greatest Song’ have been revealed ahead of the ten songs being unveiled on Monday 9th November 2020.

The head judge was announced as Jackie Bird who was joined by singer and actress, Clare Grogan as well as journalist and presenter, Gordon Smart and Aarti Joshi of DF Concerts. 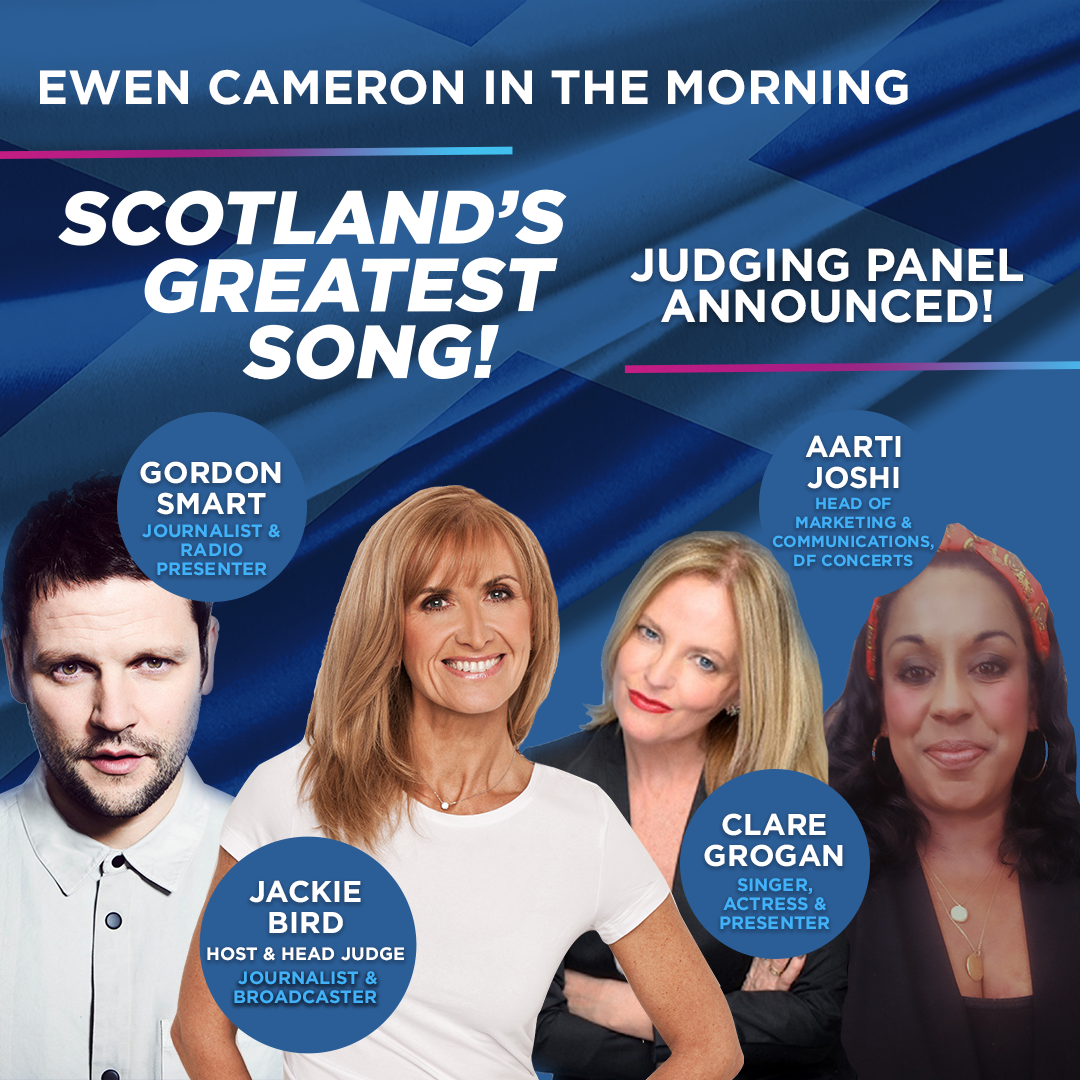 After hours of debate, discussion and even the odd disagreement the quartet have selected the ten songs which the public will be able to vote on from Sunday 15th November to be named as ‘Scotland’s Greatest Song’.

The winner will be announced by Ewen Cameron across the Greatest Hits Network Scotland including Forth 2, Clyde 2 and Tay 2 on St. Andrew’s Day.

The search was launched to celebrate the country’s musical heritage and head judge, Jackie Bird, found it tougher than expected to narrow it down to ten.

She said: “It is such a pleasure – and a pressure – to be part of the momentous challenge that is finding Scotland’s Greatest Song.

“The judges put their hearts and souls into whittling down a long list of classics to reach our top ten.  With so many fabulous songs to choose from and so many people rooting for their much-loved favourites it rightly became a huge and very serious debate.  I’m so glad it’s the listeners who will make the final decision.”

Clare Grogan, added: “Ultimately I have loved this torturous experience! Getting to re-listen to these amazing songs and artists has been joyful and my goodness we were spoilt for choice.

“So many incredibly talented and influential musicians that Scotland continuously produces and so proud to be part of this with my fellow judges. I’ve never enjoyed fighting with people more!”

“Many hours are happily spent debating the relative merits of different songs and artists and I’m sure that there will be a wide range of views and opinions as to what should be on the shortlist!

“I’m looking forward to the shortlist being announced and to find out who our listeners and the general public select as ‘Scotland’s Greatest Song’.”

The project is the brainchild of Glasgow-based audio specialists Audio Frontier, which has won a funding bid for the programmes through the UK Government’s Audio Content Fund.

“The team of judges we have assembled, know their music inside out and I’m just glad we could pass the buck on to them to finalise the ten songs that the country has to vote for.”

On Monday 9th November a podcast launches to reveal the 10 songs shortlisted and how the judges came to the final ten. Ewen Cameron will also join the debate about the shortlist on the same day on his breakfast show ‘Ewen Cameron In The Morning’ from 6am.

On Sunday 15th November from 4pm to 7pm the judges will also come together for a special one-off show across the Greatest Hits stations in Scotland. Hosted by head judge, Jackie Bird, she will be joined by her three fellow judges to discuss their shortlist, how they came to their decisions and to play the final ten.

You will be able to listen on AM*, online, on DAB radio, via the station app or on your Smart Speaker.