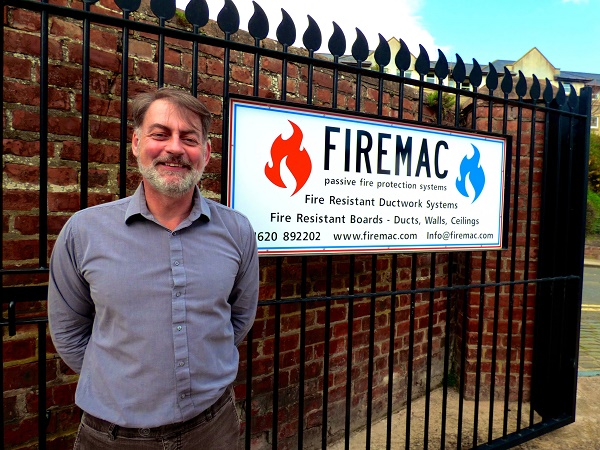 Firemac FM Fabric PSA is the latest innovation from the company which revolutionised the fire-resistant ductwork sector when it first introduced its third-party certificated fabric-based Firemac FM Fabric system to the UK some 15 years ago.

Firemac FM Fabric PSA is sold directly to ductworkers, allowing the fabrication of fire resistant ductwork to be completed under factory controlled conditions, and without the need to rely on third party suppliers. This has put the full contract, both standard ventilation ductwork, and fire resistant ducts in the hands of the ductworkers themselves.

Firemac FM Fabric PSA is an innovative glass fibre fabric less than 0.5mm thick and backed by a self-adhesive coating which makes it lightweight, durable and quick and easy to apply without any curing time. This speeds up supply and, due to the lightness of the fabric, the ductwork does not need any additional supports.

Manufactured in the UK, Firemac FM fabrics were fixed to the ducts using a spray contact adhesive, but in 2013 the company began to develop a fabric backed with a pressure sensitive adhesive (PSA). With no need for the adhesive to be applied as part of the fabrication process, the new Firemac FM Fabric PSA has halved production times.

The Queen’s Awards for Enterprise are awarded for outstanding achievement by UK businesses in the categories of innovation, international trade, sustainable development and promoting opportunity through social mobility. They are the UK’s most prestigious business awards, given only to companies or individuals who are outstanding in their field. Now in their 52nd year, a total 238 of awards are being presented. Firemac will be presented with the award by The Lord Lieutenant of East Lothian, The Queen’s local representative, at its headquarters in North Berwick, and will also attend a Royal reception at Buckingham Palace later in the year.

“When I started the business I was based in my house, with a phone and a computer. Since then the company has grown incredibly and now employs 23 staff, in the UK, Dubai and Malaysia. We have excellent suppliers who we work closely with in developing our products and the development of our PSA fabric was a real collaboration between our technical and sales teams, and our suppliers.

“The result is a fantastic product which our customers have adopted to such an extent that our sales have doubled in the UK since its introduction in September 2014. To win the Queen’s Award is a huge achievement for us, and is a result of the hard work of all our staff, and the loyalty of our customers.

“Firemac is still essentially a family business, with a team of staff that have been with us for a long time. While the Queen’s Award for Enterprise is usually associated with a product, in our case our PSA fabric, it is also recognition of the team behind it, and I’m delighted to accept it on their behalf”.

Firemac is now one of the UK’s leading suppliers of fire resistant ductwork with their systems having been installed in a number of major infrastructure projects including London Underground, Anfield Stadium, and power stations. It is also used in a wide range of major blue chip companies such as Hilton Hotels, Ministry of Defence, Whitbread, Marks and Spencer’s, Nandos, Burger King, Premier Inns and Holiday Inn.

Firemac systems are also installed in a number of major international projects including the Doha, Lucknow and Jakarta Metros, the Dubai Mall and Burj Khalifa as well as other many other commercial developments in Bahrain, Saudi Arabia, Qatar, UAE, Kenya, India, Singapore, Indonesia and Australia.