Ties of friendship between the Chinese city of Fuzhou and Edinburgh in Scotland were strengthened this week as a letter of intent between the two Capitals was signed on Thursday (12 April).

The agreement aims to promote communication and understanding between the regions and develop cooperation in the fields of science and technology, culture, education, sport and tourism. It follows a positive exchange of visits between the Lord Provost of Edinburgh and Ms Lin Xiaoying, who accompanied Consul General Xinchun Pan to sign the letter of intent in the City Chambers. 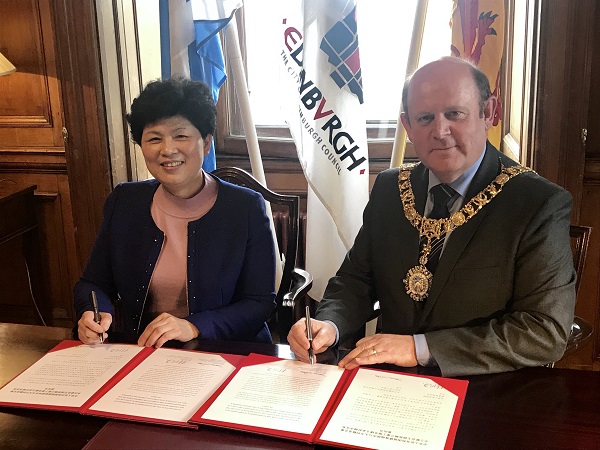 Situated in the eastern part of Fujian in the lower reaches of the Min River, the 2,000 year-old city of Fuzhou has a population of over seven million citizens and serves as the region’s economic, political, cultural and industrial centre.

A delegation including Ms Xiaoying has held talks with senior fellows from Napier University and the Royal Company of Merchants, representatives from Edinburgh Airport and Edinburgh Castle, as well as members of the City Council and Marketing Edinburgh during their visit this week.

Commenting, Lord Provost Frank Ross said: “Like Edinburgh, Fuzhou is an historic city of culture with thriving tourism and technology industries. Despite being 9,500 miles apart, this letter of intent for the establishment of a friendship-city relationship will allow us to share much of what we have in common, with the aim of increasing opportunities for contact. The word Fuzhou in Chinese translates as ‘Good Luck City’, and I am optimistic our future relationship will prove to be lucky and valuable for both cities and our citizens.”

Head of Marketing at Edinburgh Airport, Rob Lang, said: “Scotland and China already share a strong bond which has now been further strengthened by this agreement to bring Edinburgh and Fuzhou closer together in a number of sectors, and the ability to share knowledge and culture highlights the deep roots of that relationship. It’s another positive development in the city’s relationship with Chinese cities following the recent announcement of a direct route between Edinburgh and Beijing that will bring fantastic rewards for many.”

John Donnelly, Chief Executive of Marketing Edinburgh, added: “We have been working closely with our colleagues across the city for some time to establish enhanced connections with China, and just recently were delighted with the announcement that Edinburgh will now have a direct air link to Beijing, a great indication Edinburgh’s global significance and a great opportunity to develop new and existing business links between Edinburgh and Asia.

“It’s a natural progression that we now develop and deepen our relationship with other cities in China.  Fuzhou, like Edinburgh, has specific interests in science and technology, culture, education, public health, sports and tourism, and we looking forward to having more opportunity to work together and collaborate in the future and as a result of this agreement.”