Edinburgh International Film Festival (EIFF) today unveiled its new creative for the 2016 edition of the Festival which has been developed by EIFF’s new creative agency, The Lane. 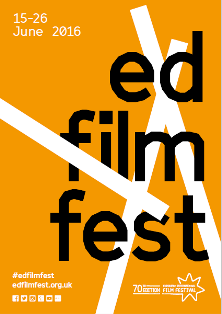 Charged with developing EIFF’s creative over the coming three years, The Lane’s development of the latest creative is inspired by the concept of cinematic past, present and future and depicts a contemporary visual identity. This year’s offering is striking and marks the Festival’s 70th edition and position as the longest continually running film festival in the world.

The creative depicts a contemporary visual identity look to the cinematic posters and credit sequences designed by American graphic designer Saul Bass as a reference. Simple stripe patterns are adopted as a nod towards traditional cinematic film and the line in the current brand marque. The font used comes from the font family called GT Cinetype, which is, appropriately, based on a design engineered for a cinema subtitling machine.

The Lane is an award-winning full service integrated communications agency, owned and managed by Ali Findlay and supported by a team of directors across multiple disciplines. With a team of 25 digital creative, development and marketing experts under one roof, The Lane offers the combined expertise to deliver effective websites and integrated digital campaigns.

EIFF Marketing Manager, Kirsty Tough, commented: “‘Edinburgh International Film Festival is delighted to be working with one of Edinburgh’s leading creative agencies for our 70th edition, and the subsequent Festivals in 2017 and 2018. The Lane has an impressive, award-winning, history and we are looking forward to working in partnership with them over the coming years.

This year’s Festival creative is bold and exciting and reflects EIFF’s values as an innovative and ambitious Film Festival.”

The Lane’s Creative Director, Ricky Stevens adds: “We’re delighted to have been appointed by EIFF to be their creative agency, especially in the year of their landmark 70th edition. For any agency it’s the dream brief to work with a client in the creative industry and particularly one within the film arena. We’re very much looking forward to partnering with EIFF on bringing to life the ideas that will deliver great results for a long-established and much-loved Scottish event.”