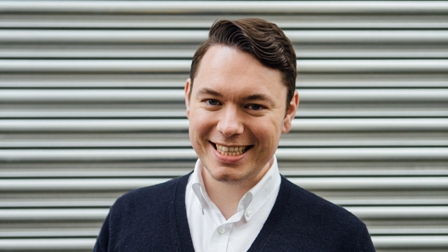 Queen Margaret University graduate, Shaun Bell, has been presented with the prestigious Outstanding Young Communicator of 2016 award at the acclaimed UK CIPR Excellence Awards in London, awarded by the Chartered Institute of Public Relations.

Shaun (26), who is a senior account manager at Stripe Communications in Edinburgh, fought off fierce competition from young PR professionals from across the UK to claim the accolade. The night also brought success for Shaun’s team as Stripe was named Mid-sized Consultancy of the Year.

The judges said: “Shaun is a breath of fresh air. We were impressed by his career to date and his leadership role within the agency. As an outstanding member of the Stripe team, Shaun puts people first, shows great entrepreneurial spirits and has wowed his clients with incredible results.”

In 2007, Shaun moved to Edinburgh from Dumfries to study Drama & Theatre Arts BA (Hons) with specialism in Arts Journalism at Queen Margaret University. After graduating with a first-class honours degree in 2011, he joined Stripe’s ‘Star’s and Stripes’ graduate programme. He has since achieved four promotions and climbed the ranks to become a senior account manager.

Shaun works with some of Stripe’s biggest clients including ScottishPower, A.G. Barr, John Lewis and the Scottish Government. This latest award comes two years after Shaun won CIPR Scotland’s Outstanding Young Communicator award in 2014. Shaun is an active member of the Chartered Institute of Public Relations and was appointed secretary of CIPR Scotland after joining the committee only last year.

Speaking of his success, Shaun commented; “It’s incredible to receive this award, particularly given the calibre of the other finalists. I’m honoured to get such encouraging and inspiring comments from the judges. Over the last five years, I’ve had so much support from the Stripe team and I’m glad I’ve done them proud.”