Five teams of staff from Edinburgh based companies have raised over £8,600 for Scotland’s HIV and hepatitis C charity, Waverley Care, by taking part in a new corporate challenge event at the Edinburgh Fringe Festival. The Big Corporate Shake-up saw teams from The Scottish Qualifications Authority, Wood Mackenzie, Mercer, RBS and Phoenix Group enter teams of six people to the competition this August. 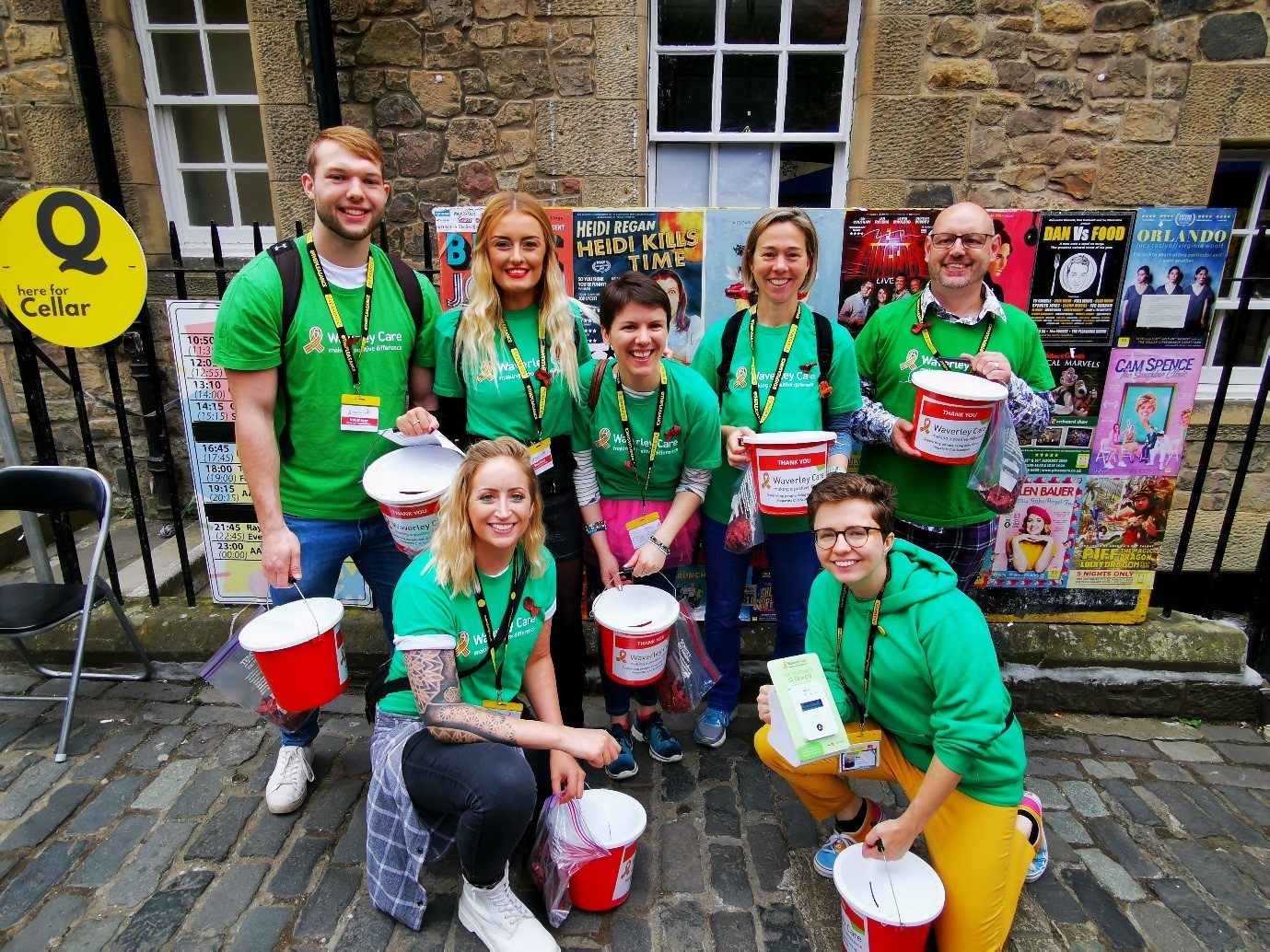 Each team had four hours to collect as many donations as possible from locals and tourists alike who were visiting the Pleasance Courtyard at the height of the Fringe Festival. The teams were pitted against each other to raise the most, with the team from Pride Wood Mackenzie – the company’s LGBT staff network – taking first prize.

Matt Middler, Acting Fundraising Manager at Waverley Care said: “We have been blown away by the passion, commitment and creativity of the teams taking part in The Big Corporate Shake-up. The teams really understood the need to continue supporting frontline services which help people affected by HIV and Hepatitis C, as well as their families and communities across Scotland.

The competition was a great success on several levels; it brought 30 volunteer bucket shakers to us who might not have volunteered otherwise, the competition element meant that they raised on average more than double what we would expect from a regular bucket shake, and company match-giving means that most of what was raised will be doubled again by their employers. In the first year of the competition, our expectations have been blown away and we’re already excited to start planning our 2020 Big Corporate Shake-Up!”

Shaking Things up for Good

The teams were able to take part in the competition using workplace employee volunteering days, with each day proving a fantastic opportunity for team building as well as giving back to the community. Alison Barclay, from the SQA Rainbow Network, said “The competition element of the challenge meant we pushed ourselves harder than we might have otherwise, and we’re all really proud of the amount raised. I would highly recommend this as a workplace volunteering activity.”

An astounding total of £4,655.59 was raised over the five days of the competition, with company match-funding from four of the participating teams taking the total donated to the charity to £8,628.63.

Adam Meredith, team captain from Wood Mackenzie, who entered a team from the company’s Pride Network said “The Big Corporate Shake-up was a fantastic event and we were thrilled to be a part of it. We were delighted to take home the Shake-up trophy and pleased to be able to double what we raised through workplace match-funding. We’re already thinking about how we can beat our record next year.”

Abbi Watson, Senior Proposition Governance & Reporting Manager and member of the Affinity Network at Phoenix Group, said “Overall, we had a fantastic time together as a team, pushing ourselves out of our comfort zone and raising funds for a great cause, all the while soaking up the atmosphere at the Pleasance Courtyard during the Edinburgh Fringe Festival. We would highly recommend the Big Corporate Shake Up to any companies thinking about taking part next year.”

Thanks from Everyone at Waverley Care

A big thank you from everyone at Waverley Care to all the participating teams, including:

The time, effort and passion of the participating teams helps us continue making a positive difference in the lives of people affected by HIV and hepatitis C across Scotland.

The charity challenge-event was run in partnership with The Pleasance Theatre Trust, Edinburgh based design agency DarlingForsyth and film and video production company Neon Eye Productions.

Waverley Care have been the charity partner of The Pleasance Theatre Trust for 28 years, raising over £500,000 in donations during the Fringe in that time.