Events Venue Invests in its Crowning Glory & Future, Despite Pandemic 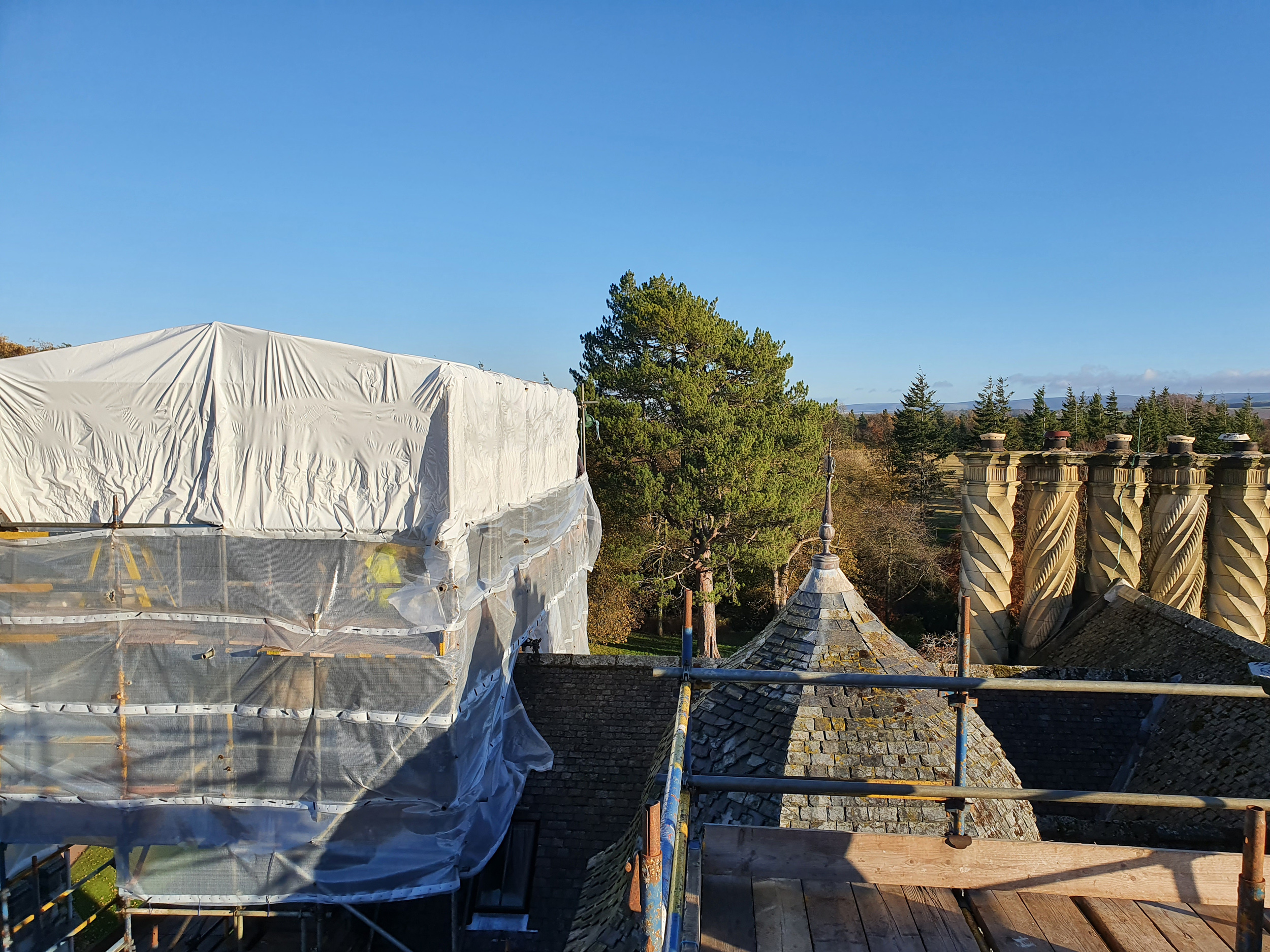 If you build 20 chimneys the height of an African elephant out of sandstone and stick them on top of a Scottish castle when Charles I still had his head on, you would expect they would need some maintenance 400 years later.

“Even the chimneys created by the King’s Master Mason need some tlc; perhaps all the more so since the ones at Winton Castle have an ornate rope design making them uniquely intricate,” says Sir Francis Ogilvy, the owner of Winton Castle in East Lothian. “Fashionable as status symbols, the chimneys were intended to impress, but now four of them need to be dismantled for restoration work and rebuilt.

“This project has been planned for a long time, with detailed research into all elements of the work.  If we’re to find a silver lining to the serious limitations the pandemic imposes on hospitality business, getting this done now offers one.

“Winton Castle has already reopened for small events – since the summer we’ve been running some socially distanced meetings, garden parties, micro-weddings and outdoor activities for clients, all within the guidelines.

“This much-loved castle hopes to open its doors again for larger events next spring or summer in its best state ever – ready to play a part on the national hospitality stage, as it has done since its early days for the Earl of Winton.” The chimneys are part of the crowning glory of Winton and a gem of the Scottish Renaissance. George Seton, Third Earl of Winton and 10th Lord Seton commissioned them.  He moved in royal circles giving him access to the royal craftsmen. For the current six-month project, Niall Braidwood, a Conservation Architect with Ogilvy Chalmers, has brought in established Edinburgh stonemasons Scott and Brown as the project’s main contractor.

The complexity of the decorative carving applied to the scalloped, octagonal chimney stacks has required painstaking preparatory work. The latest survey techniques have been used including drones, lasers and digital modelling combined with engineering expertise by Conservation Engineer Steven Wood of David Narro Associates – not just for the chimneys but also in relation to the scaffolding to protect the building.

On the north side, the chimneys look as good as new (almost) but the side that has borne all the weather has worn thin and cracked. 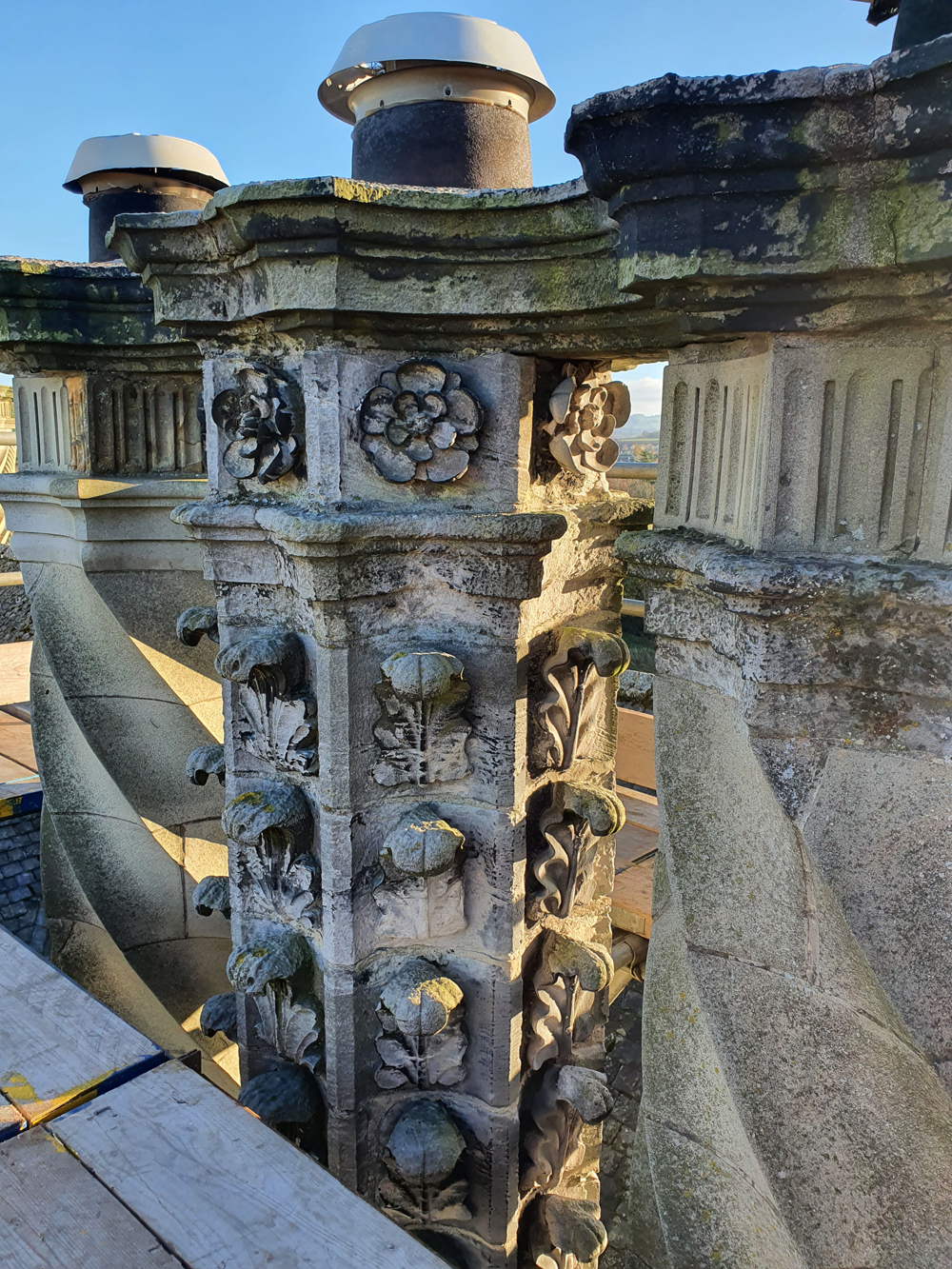 The aim is to conserve rather than replace.  The search for a good replacement stone required analysis of the original stone by the British Geological Survey.  The only stone available now in the UK with a suitable geological match comes from the Darney Quarry in Northumberland; it is being acquired and given a first cut by Hutton Stone in the Scottish Borders.

The ambitious project also aims to restore something of the dramatic appearance of the stone walls. The early work from the 15th and 17th century blended finely cut stone with rubble stone which would have been covered in a pristine, smooth lime render. The render had long-since worn away and cement harling was added in the 1960s.  Since it is harder than the stone behind it, it will be removed and replaced with a lime render once again to allow the stone to breath.

During the restoration period, Winton Castle is offering special restoration rates for micro-weddings and other events for small groups. The castle’s interiors will be as inspiring as ever.

Winton Castle looks forward to showing off its crowning glory and wowing bigger parties of visitors once again, hopefully, from next spring or summer.

You can learn more about Winton Castle and its winter rates on its website.