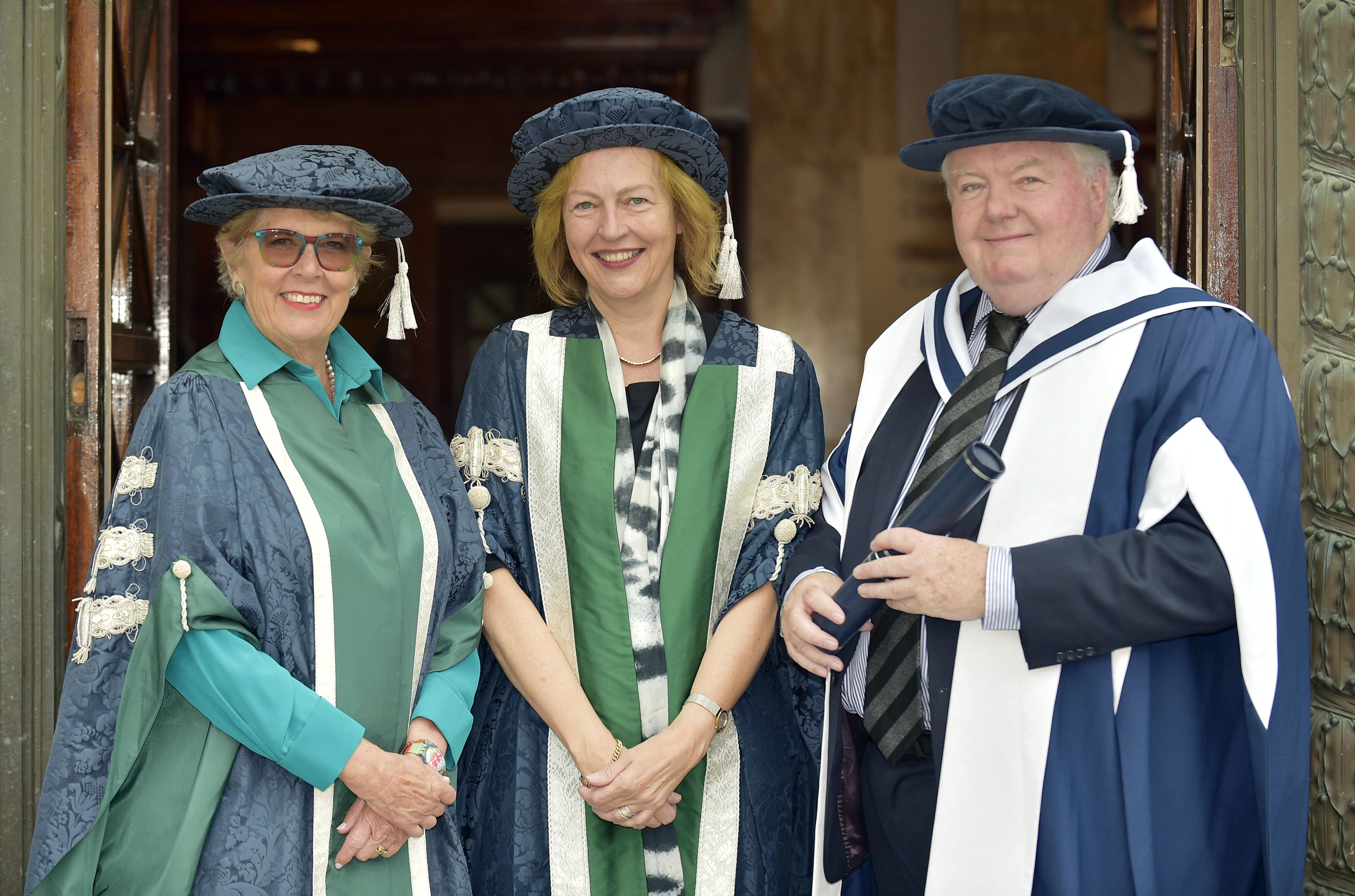 On the 11th July, the TV presenter and food entrepreneur, Prue Leith CBE, was officially installed as the Chancellor of Queen Margaret University (QMU), Edinburgh at the University’s graduation ceremony.

Prue, who was recently announced as the new judge on The Great British Bake Off, was joined by internationally renowned film producer Iain Smith OBE, who was awarded an honorary degree for services to the film industry. Both attended an impressive ceremony in Edinburgh’s Usher Hall with 800 students and their families.

Prue Leith, novelist, businesswoman, food writer, restaurateur, campaigner and TV presenter, takes over the role of Chancellor of the University from entrepreneur Sir Tom Farmer, who served as Founding Chancellor of QMU from 2007 to 2016.

Prue has an impressive track record as an entrepreneur, having successfully built a business from scratch in the 1960s which grew to become Leith’s Good Food, the party and event caterer. In 1969, she opened Leith’s, her famous Michelin starred restaurant, and, in 1975, founded Leith’s School of Food and Wine which trains professional chefs and amateur cooks. Today, Leith’s at the Edinburgh International Conference Centre (EICC) is one of Leith’s most important catering contracts.

Her skills as a businesswoman and her concern with the need for more women at the top of industry, the City and public life, led to her appointment as a non-executive director of many top organisations such as British Rail, Safeway, Whitbread, and Belmond (formerly Orient Express) Hotels.

Now, Prue mainly works as a writer (with seven novels and an autobiography ‘Relish: My Life on a Plate’ to her credit) and as a TV presenter. Prue became particularly well known to the British public when she starred in the BBC 2 cooking contest programme, ‘Great British Menu’. She spent 11 years as a judge on the show before leaving in 2016. This autumn, she will take her place on prime time television as the new judge, alongside Paul Hollywood, on the popular amateur cooking show, ‘The Great British Bake Off’.

Professor Petra Wend, Principal of Queen Margaret University, said: “Prue Leith is a highly respected public figure who has strong beliefs about the importance of education and in its transformational impact on society. She has contributed significantly to the food and hospitality landscape of the UK, having worked successfully as a food entrepreneur, as well as highlighting the UK’s culinary talent and promoting good food health for all. She has become concerned about the care and rights of people who are elderly or dying, and is involved with the ‘Dignity in Dying’ campaign and the Campaign for Better Hospital Food. She is also active in tackling inequalities, promoting entrepreneurship and supporting and nurturing young talent.”

Iain Smith OBE was awarded an honorary degree for services to the UK and the international film industry at today’s graduation ceremony.

Born and raised in Glasgow and a graduate of the London School of Film Technique (now the London Film School), Iain is an international film producer with some serious credits to his name. His career began as a line producer for David Puttnam on ambitious movies such the ‘Killing Fields’ and ‘The Mission’. He is also known for his involvement in a variety of feature films and cult classics including ‘The Fifth Element’ and creatively adventurous films such as ‘Cold Mountain’, ‘Wanted’, ‘Children of Men’ and the TV series ‘24: Live Another Day’. Believed to be one of Europe’s busiest producers, Iain was the recipient of a BAFTA for Outstanding Achievement in Film in 2005, and was made an OBE for his services to the film industry in 2008.

Brought up in Glasgow, where he attended Hillhead High School and Jordanhill College School in the 1960s, Iain left for the bright lights of the capital, studying at London Film School where he graduated with a 1st Class Honours Diploma. Having worked for several years in London, Iain returned to Scotland to make ‘My Childhood’, the first of the award winning trilogy directed by the late Bill Douglas. ‘My Childhood’ was filmed in and around the village of Newcraighall in the 1970s, near the present site of Queen Margaret University’s campus. The film received critical acclaim and won several awards.

Iain formed his own production company in partnership with Jon Schorstein and produced television commercials, documentaries, children’s feature films and low budget dramas, and in 1978 production managed Bertrand Tavernier’s ‘Deathwatch’ starring Romy Schneider and Harvey Keitel, shot in and around Glasgow. A year later, he worked for fellow QMU Honorary Graduate, David Puttnam, as location manager on the Oscar and BAFTA winning ‘Chariots of Fire’.

Iain went on to stamp his mark on both the British and Hollywood film industries with his involvement in ‘Local Hero’, starring Burt Lancaster and a young Peter Capaldi, ‘The Killing Fields’ and ‘The Mission’. In 1987, he formed Applecross Productions and co-produced ‘Hearts of Fire’ with Bob Dylan and Rupert Everett, followed by Michael Austen’s ‘Killing Dad’ starring Richard E. Grant and Julie Walters. In 1991, he co-produced ‘City of Joy’ starring Patrick Swayze and Pauline Collins, and in 1992, executive produced Ridley Scott’s ‘1492 – Conquest of Paradise’ starring Gerard Depardieu and Sigourney Weaver.

In 1994, Iain returned to Scotland to co-produce Stephen Frears’ adaptation of Dr Jekyll and Mr Hyde starring John Malkovich, and Julia Roberts as the eponymous ‘Mary Reilly’. ‘The Fifth Element’ followed in 1996, starring Bruce Willis and Gary Oldman, and was produced by his company Zaltman Films Ltd.

Despite his significant movie commitments, he is dedicated to the development of the film and creative industries, having served on several boards. He is currently Chair of the Film Skills Council and of the Film Industry Training Board and chairs the British Film Commission.

Dr Richard Butt, Deputy Principal of Queen Margaret University, presented Iain’s oration during the graduation ceremony. He said: “Iain describes himself as a globally inclined film producer and the reach of his work is indeed worldwide. However, he has never lost his connection with a cinema which is rooted in cultural history and which provides a sense of authenticity, evident in examples of his work such as ‘My Childhood’, ‘Chariots of Fire’, ‘Cold Mountain’ and ‘The Killing Fields’. Aside from his outstanding achievements as a world-class film producer, he has continued to guide the development of the creative industries and to nurture new talent through master classes, his support of training boards and film academies, and his involvement in the production of small budget films such as ‘Time Trial’, the immersive documentary on the final season of Scottish pro-cyclist David Millar.”

Principal, Professor Petra Wend, concluded: “We are delighted to officially welcome Prue Leith to her new position of Chancellor of Queen Margaret University and to her first QMU graduation ceremony. We are also honoured that today our students have also learned about Iain Smith’s most impressive career. Iain’s care for the film industry and respect for its audiences, his creative risk taking, his tremendous leadership and management skills as a producer, exemplify many of the values that to which QMU ascribes. We are therefore pleased to recognise his considerable achievements with the award of Degree of Doctor of Letters, Honoris Causa.

Professor Wend concluded: “Both Prue Leith and Iain Smith are highly influential individuals whose accomplishments in their specialist areas reflect the relevance of the University’s work, particularly across our flagship areas of sustainable business, health and rehabilitation, and creativity and culture. These two individuals fit well with QMU’s aim of serving communities, improving lives and our vision to be a university of ideas and influence.”