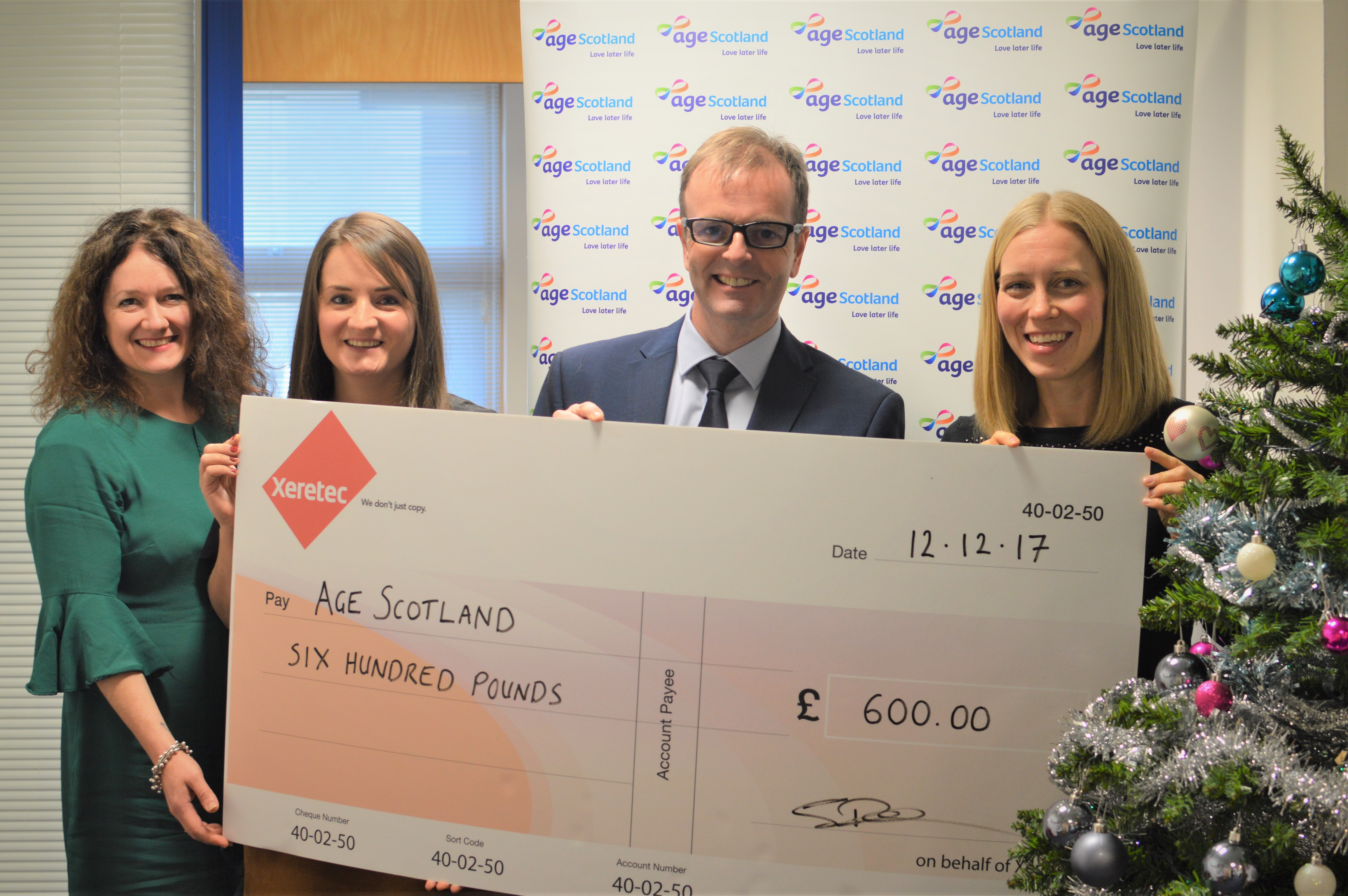 A leading managed print services firm has raised more than £8000 for local and national charities during 2017.

In Scotland, Xeretec which works throughout the UK and Ireland, opted not to send Christmas cards, and donated money to Age Scotland, presenting the charity with a cheque for £600 in Edinburgh last week.

Other charities to benefit from the team’s endeavours and donations from Xeretec included, Alexander Devine Children’s Hospice, Crohns and Colitis UK, Cantraybridge College, COPE Galway, Macmillan Cancer Support and WADE (Wokingham & District Association for the Elderly).
In one commendable personal achievement, by raffling a Formula 1 driver’s signed cap and various other activities, Xeretec employee Marta Gosson raised €45,000 to support a bereaved family whose father passed away during the Isle of Man TT Race.

Each year Xeretec teams up with three core charities to support them throughout the year with company fundraising initiatives, and this year’s charities were Age Scotland, Alexander Devine Children’s Hospice and COPE Galway.

Xeretec also encourages team members to embark on their own initiatives. Team initiatives included a 50-mile relay race, Dress up in Pink, the Alexander Devine Windsor Santa Dash, 24hr gaming broadcasted live on Twitch, The Nuts Challenge and a thrilling Trek up Mount Tukbal in Morocco.

Commenting on its charitable activities in 2017, Adam Gibbons, Xeretec’s Group Managing Director, said: “As a company with a growing nationwide footprint, we’re keen to support national and local charities. One of Xeretec’s core values is to share our success and give back to our local communities’ charitable causes. I applaud our team’s efforts and commitment to supporting causes this year, and their desire to have a positive impact on their communities.”

Its positive contribution to charities wasn’t the only success Xeretec enjoyed in 2017. It also acquired the Landscape Group, the UK’s most accreditedHP MPS and Solutions Specialist, in a move that creates a new managed print powerhouse. With a bigger team on board, Xeretec is looking forward to increasing its charitable efforts in the New Year and throughout 2018.