‘Royal Air Force Centenary 1918 – 2018’ has been named to commemorate the RAF’s centenary and its historic links with the railway in North Wales.

The nameplate, which carries the station crest of the RAF Valley station, was unveiled at a ceremony by veterans Mary Roberts and Wing Commander John Wynne, both of whom served in WW2. 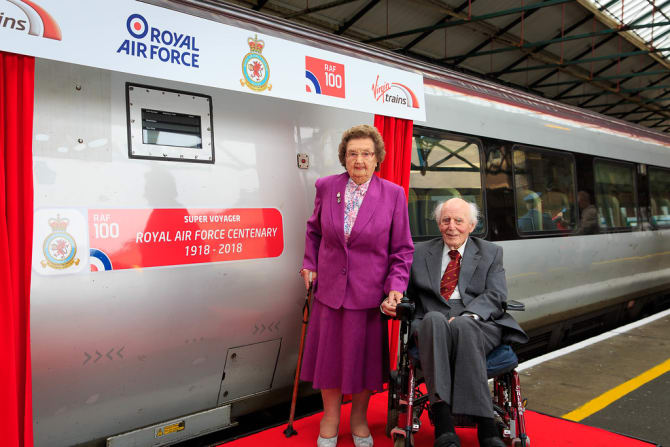 Mary, who turned 100 in May, served as a nurse. Her role saw her based at RAF Hemswell, where she was in close contact with the flying crews of the bombers that flew nearly every night over Europe. She was also posted to Flying Training Command at Penrhos, Pwllheli in North Wales.

John Wynne, who lives in Gwynedd, was a pilot and flying instructor who flew Wellington bombers, Fortress and Mosquito aircraft and the Valiant jet bomber throughout his career.

The pair spoke of their pride at naming the train at Holyhead station – Virgin’s North Wales base located six miles from RAF Valley.

Mary Roberts, who lives on Anglesey, said: “I am thrilled to have been invited to take part in this special occasion during the RAF’s Centenary year. God Bless the train and all who travel in her.”

Wing Commander John Wynne DFC, aged 97, said: “I’m delighted to be supporting this RAF Centenary event with Virgin Trains, which is about service and connecting people. This splendid ‘Royal Air Force Centenary’ train, which is a vital transport link for the people of North Wales and beyond, will provide us with a living reminder of the great service of the RAF to our nation and its shared history with Wales for the past 100 years.”

Air Commodore Williams, RAF’s Air Officer Wales, said: “The RAF are very grateful to Virgin Trains for naming one of their engines after the RAF Centenary. We know that having an engine named after you is a rare and special thing, so the RAF is delighted to be recognised in this way, and I hope Virgin Trains customers across the network will also enjoy this special connection to the RAF. The Virgin Trains route from London Euston to Holyhead also goes directly past RAF Valley in Anglesey, where all the RAF’s fighter pilots are trained, so these are all great reasons for us to celebrate the RAF Centenary together. Thank you, Virgin Trains.”

Gaynor Stewart, General Manager at Virgin Trains, added: “We’re proud to be playing our part in celebrating one hundred years of the Royal Air Force and its personnel – past and present. From its early days the RAF had connections to the railway and we’re pleased to be highlighting its continued links, as they mark a significant milestone in its history. We have been proud to serve North Wales for over 20 years and during this time we’ve worked closely to support RAF Valley with their work in the local community here on Anglesey.”

The nameplate was unveiled on Virgin Trains’ Super Voyager 221114 shortly before its inaugural journey to London.

It features the crest of the RAF Valley station, located yards from Virgin Trains’ North Wales route and home to No 4 Flying Training School, responsible for training the UK’s next generation of world-class fighter pilots.

This is the first Voyager in Virgin Trains’ fleet to carry a different name to the ‘famous Voyagers’ names that were used when the fleet was first introduced in 2001. The Class 221 train will serve the North Wales route and other destinations including Edinburgh, Birmingham and Shropshire.

The railway’s connections with the RAF can be traced back to the early days of the Air Force with Locomotive No. 6 Douglas – a steam locomotive that was built in 1918 for Air Service Construction Corps and used by the RAF until 1946. Now located at the oldest preserved railway in the world – Talyllyn Railway in southern Snowdonia – Locomotive No. 6 Douglas has been adopted by the Towyn & Aberdovey Royal Air Force Association and earlier this year received a RAF centenary livery to mark its 100th year.