Winton House in East Lothian has opened its gardens to visitors under Scotland’s Gardens since 1931, 85 years ago, making it the first and longest running garden to open to the public since the scheme started that year. 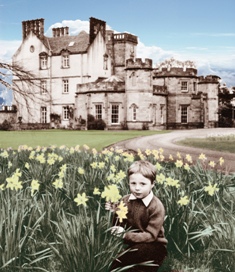 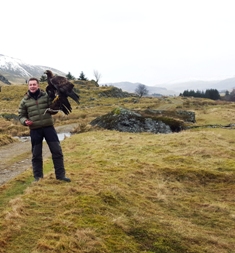 Winton House’s charity Family Spring Open Day is on Sunday 10th of April (12 noon – 4.30 pm), 2016. Funds are being raised this year for Marie Curie, the charity that provides care and support for people who live with terminal illnesses.

The day before, Saturday 9th April, the Winton Trail Run takes place with 3.5k, 5k and 10k distances, providing another, more energetic opportunity to raise funds for Marie Curie. Sign up via http://www.wintonhouse.co.uk/trail-run.php

At the Open Day, there will be lots of family entertainment: Elite Falconry displays featuring Stanley the Golden Eagle and his feathered friends at 1.30 pm and 3 pm (he recently starred on the BBC’s Winterwatch with Chris Packham!); lambs, archery, treasure hunts and face painting; as well as guided house tours. Home-baked teas and light lunches will be served at ‘Café Winton’ and the famous Luca’s Rolls-Royce ice cream van will be on hand.

Winton House is proud of being the first ever garden to open under Scotland’s Gardens scheme in 1931. This means that Winton’s terraced and walled gardens have welcomed visitors every year, bar one during the War.

In the early days invitations were just posted out to friends of the Ogilvys and only a handful of visitors attended. By the 1960s, when “the entry fee was 2s & 6d” according to Jenny Black, the numbers had increased to about 50 visitors; by the 1970s, the Winton Open Day was an established outing for the local community with over 800 guests.

Homemade teas in the dining room have been a popular ingredient for as long as anyone can remember. They used to be served by local children who “weren’t allowed to help themselves to the cakes, unlike today!” says Penelope, Lady Ogilvy. The same huge blue teapot is still serving teas!

Historical tours of the Scottish Renaissance house were originally provided by Sir David Ogilvy and Penelope, Lady Ogilvy, and knowledgeable local guides. Penelope recalls that they were joined by their imaginative twelve year old son, Francis, who was very good at making up stories to fill in any gaps in his knowledge!

“I may have said that Bell’s Whisky used to be based in the house and their name was over the fireplace; that part of an old wooden barrel was St Columba’s coracle; and that some dubious vases dated back to the Chinese ‘Who Flung Dung’ Dynasty!” confesses Francis Ogilvy.

The more accurate elements of Francis’s tour resulted from a four year apprenticeship provided by a local legend called Edith MacInlay, a fountain of historical knowledge.

Fiona Beaton, Community Fundraiser at Marie Curie, adds: “We are so grateful for the support of Winton House. Just £20 pays for an hour of nursing care for someone with a terminal illness. So, through raising funds at the Open Day and Trail Run you are helping people and their families get vital care and support in East Lothian.

“Our nurses provide care for local people with terminal illnesses, working day and night in people’s homes in East Lothian to provide care when they and their families need it most.”

In 2014-15 Marie Curie nurses in Scotland provided over 36,000 visits to people with terminal illnesses.

More information on the Open Day at http://www.wintonhouse.co.uk/open-day.php