FOR Rita Armin, the whereabouts of her Grandfather’s grave after he died fighting in World War One remained a 100-year-old mystery which her family had given up on solving.

But thanks to a chance encounter with a Virgin Trains employee, Mrs Armin was able to piece together the final resting place of the man she never met. 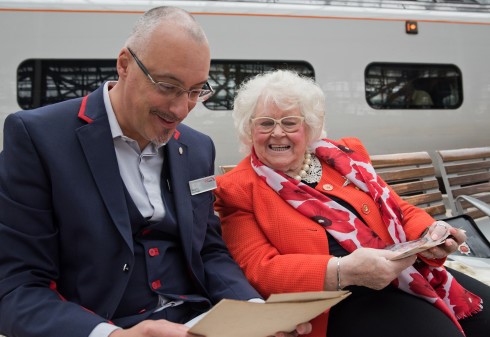 While travelling to London on a Virgin train from Stockport to Euston, the 85-year-old was assisted on her journey by Train Manager Wayne McDonald who just happened to be a war enthusiast.

The pensioner, who is a member of the War Widow’s Association, was on her way to Buckingham Palace for a reception to mark Prince Charles’ 70th birthday. Her husband, Corporal Henry Armin of the Royal Engineers (Airborne), died of the injuries he sustained in World War Two.

As Mrs Armin and Mr McDonald got chatting on the two-hour journey and it transpired that the family had been unable to find out where her Grandfather, Private Thomas Bryan of the 2nd Ox and Bucks Regiment, was buried since his death during the Great War in 1915.
She explained: “My Grandma used to talk about him fighting in France in the First World War, and she never saw him again after he left home to fight in his best suit.

“All she received after he died was a parcel with his suit in, full of French clay. This story had stayed with me, even though I was only a little girl when she talked about it.”

She asked Mr McDonald if he could anything to help find out the full story as he had an interest in the history of the conflict. As they parted ways, Mrs Armin thought it was unlikely she would hear from the train employee again.

“I had tried previously but there were so many names the same as my Grandad, that I gave up,” she said. “I gave Wayne as much detail as possible and he said he would come back to me if he found anything.

“A few days later I received an e-mail from Wayne with the most amazing information that he had tracked down the location of my Grandad’s grave.

But Mr McDonald also discovered more surprising information: “Grandad had died in France, but unbeknown to me he was actually my Step-Grandad,” she explained.

“Grandma had married again after her first husband had died, leaving her with five children the youngest being my father.”

“Never, in a million years, did I expect to receive all that lost information about my paternal Granddad. For years I have wondered what he was like, where his remains are. I am so grateful to Wayne, I’m having difficulty in expressing the words to thank him.”

Not only this, but Mr McDonald visited Béthune Town Cemetery where Private Bryan was buried to pay his respects and take a photograph of the burial site for Mrs Armin.

Mr McDonald, who describes himself as an amateur war researcher, found the grave with the help of some old census data and the Commonwealth War Graves Commission website, ahead of his visit to the cemetery in Northern France.

He said: “It was fascinating listen to Rita’s family stories and an absolute privilege to help solve the mystery of what happened to Thomas.”