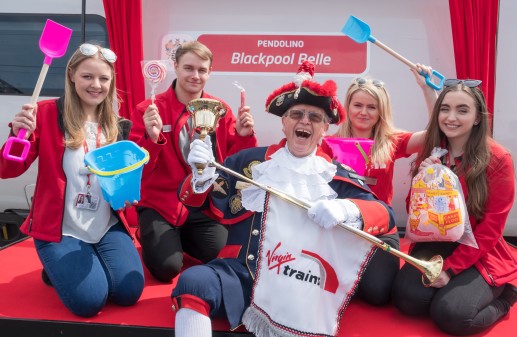 Virgin Trains has named one of its Pendolinos Blackpool Belle to celebrate the launch of its first electric services to and from the resort today (Monday 21 May).

The 390013 Pendolino carries the name made famous by the resort’s first illuminated tram and an excursion train which took people across Lancashire for a Saturday night of dancing through the 1930s to 1960s.

Blackpool Belle, which has also been remembered in a song by Lancashire folk band The Houghton Weavers, was suggested by readers of the Blackpool Gazette.

The illuminated tram was based on a Mississippi paddle steamer and was in operation from 1959 until the end of the 1978 season.

The launch of electric Pendolinos on the Blackpool route follows Virgin Trains’ reintroduction of direct services to London in 2014.

The new services will strengthen connections to and from the capital six days a week, providing eight direct services each weekday, five services on a Saturday and generating an additional 16,900 seats a week*. A direct service from Birmingham on Saturdays will offer the West Midlands a direct service to Blackpool for the first time in 15 years – helping to spread opportunity along the West Coast Main Line

Pendolino 390013 was unveiled by Virgin Trains driver and avid rail supporter Martin Gurr, General Manager of Heritage Operations at Blackpool Transport. When he’s not driving Virgin services, Martin heads up a team of 60 volunteers that operate and crew Blackpool’s heritage trams that run along the Promenade.

The introduction of electric services follows the completion of Network Rail’s work to electrify the line between Blackpool and Preston and lengthen platforms at Blackpool North station to allow the longer Pendolino trains to travel to and from the seaside resort.

Michael Stewart, General Manager at Virgin Trains on the west coast, said: “At Virgin Trains we’re really pleased to welcome Blackpool Belle to our Pendolino fleet, as we introduce our iconic Pendolino trains to the Blackpool route for the first time. We have been proud to serve Blackpool for the last three years and are excited to reach this milestone, as we strengthen our links to and from the resort with our Pendolino trains, which have helped to transform our west coast route. The name ‘Blackpool Belle’ is pertinent to Blackpool – it provided opportunities and firsts for the resort – which is what we hope our investment to deliver additional services will bring to local communities along the route. We’re sure our new services will help bring more visitors to the seaside resort to explore what it has to offer – just as the Blackpool Belle did over 50 years ago – and we look forward to welcoming more people on-board.”

Cllr Gillian Campbell, Deputy Leader of Blackpool Council, said: “This is a truly historic day for the resort in that it represents the culmination of the biggest investment in our rail services for a century. The additional direct services to London, Birmingham and other towns and cities give visitors the perfect opportunity to jump on a train and sample for themselves the joys of our beaches, attractions and world-class events.”

Bryan Lindop, Head of Heritage and Chair of Blackpool Heritage Trust, said: “This is a fabulous example of teamwork and joined up thinking which supports a world class transport experience. With the completion of our tramway extension to North Station in the not too distant future and these wonderful new Pendolino electric train services, Blackpool is firmly back on the map and very easily accessible. ‘Blackpool Belle’ is a wonderful reminder that as well as cutting edge technology, Blackpool is steeped in rich history and with engaging heritage experiences for all ages.”

Paul Maynard, MP for Blackpool North and Cleveleys, said: “This is an exciting day for passengers in Blackpool, with the first direct Pendolino services to London Euston. I am delighted that Virgin Trains has shown confidence in the Fylde coast and is providing such a huge number of additional seats every week. Even better to see is that a train will be carrying Blackpool’s name up and down the West Coast Main Line.”