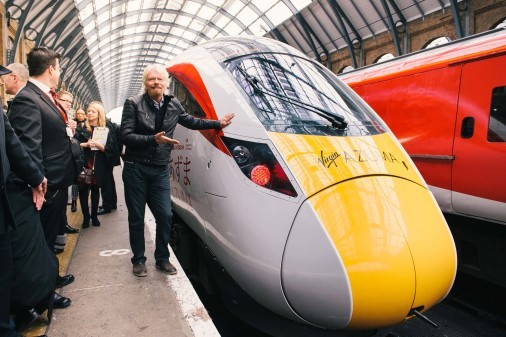 Virgin’s state-of-the-art Azuma train made its inaugural visit to Sunderland and Lincoln this week as preparations to transform rail services gather pace.

The iconic train, which takes its name from the Japanese word for “east”, will be rolled out on Virgin Trains’ east coast from next year, ushering in a new era of comfort and style for rail passengers.

The Azuma passed through Doncaster and Lincoln before finishing up in Peterborough in the early hours of Thursday morning.

The test-run by manufacturer Hitachi is part of a programme to prepare the east coast for the 65-strong Azuma fleet. The first of these will enter service in December 2018 as part of a two-year rollout programme, adding 25% more seats per service. The Lincoln timetable will see great improvements to the timetable as direct services to London increase from one to six a day.

The Azuma is set to be one of the most advance passenger trains on the UK rail network, able to accelerate faster than existing trains and providing more comfort and space inside.

Hitachi is building the new trains at their factory in the North East of England (Newton Aycliffe, County Durham), home to 1000 train builders including 50 apprentices.

Virgin Trains currently operates a daily Northbound and Southbound Lincoln service to London as well as a twice daily service to and from Sunderland.

David Horne, Virgin Trains Managing Director on the east coast route, added: “Azuma will bring a new era of style in long distance rail travel and we’re excited to see preparations gather pace that will help transform services for passengers in Lincoln, Sunderland and across the east coast.”

Andy Rogers, Programme Director for Hitachi Rail Europe, said: “Our rigorous test programme is moving apace ahead of the trains carrying passengers later this year on the East Coast main line. Over the coming months passengers and enthusiasts will be seeing plenty more of our British-built Azuma trains testing in Lincoln and Sunderland.”