1971 was the year Intel launched the microprocessor and a new digital age began. Mariner 9 became the first artificial satellite to orbit Mars and a new stock market index called the Nasdaq made its debut. Edward Heath was Prime Minister and one of the biggest changes to take place in the UK and Ireland occurred- the move to decimalisation.

45 years later and digital technology has completely taken over! The Nasdaq is now the second largest exchange in the world, plans are underway to launch a manned mission to Mars and a further seven Prime Ministers have taken office.

Something else incredible happened in 1971- it was the year Traveleads began!

Our early clients were always excited if their journey involved flying on the new Boeing 747, which made its commercial debut a year earlier. Then came Concorde, undisputed king of the skies. The fastest commercial airline in the world. What could possibly follow that? …Double-decker A380’s, featuring onboard bars, showers, private cabins and cinemas. What would the Wright brothers make of it all!

Over the past 45 years Traveleads embraced these changes and invested in the latest technology to continue offering a state of the art service to our clients. We expanded and became a multi-site company. Today we look after a vast range of businesses across the UK and Europe.

We were thrilled to be voted ‘Best Small Business Travel Agent’ at the recent SPAA awards.

We would like to thank all of our clients for their continued support, and the referrals and recommendations they constantly give us.

Here’s to the next 45years and to everyone who travels with us. 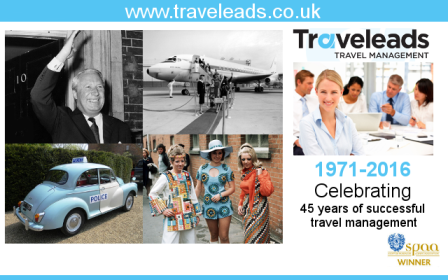