The Big Interview: AM Bid founder and MD Andrew Morrison

As a Scottish Grand Slam-winning rugby captain, David Sole, whose many corporate roles have included training brilliant business minds as an executive coach, is no stranger to a winning strategy.

So his interest was piqued when, at an Entrepreneurial Scotland event, he came across the work of AM Bid, which launched in 2014 to help businesses handle bids and proposals.

Sole got talking to founder and MD Andrew Morrison, telling him that he was unaware such a service existed to deal with the “pain” of bidding. “I think you’re on to something here,” he told the company boss, and eventually signed up as non-executive chairman, a role he still holds today.

And Morrison singles out the “commercial nous, expertise, and focus on the people side of the business” brought to the table by the former sportsman. “We get huge benefits from David Sole’s involvement with AM Bid,” says the MD. 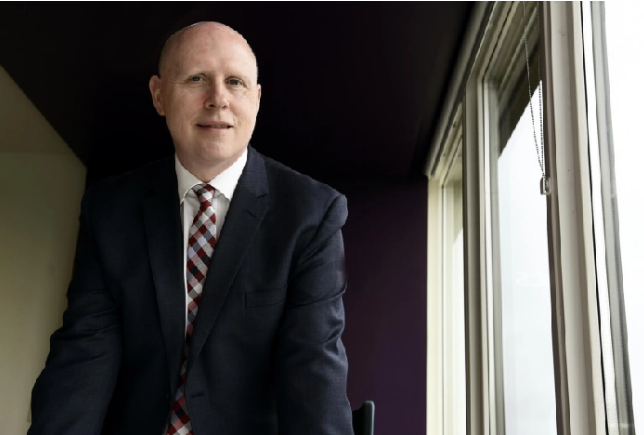 Morrison says the firm is Scotland’s largest bid and tender specialist, and claims win rates of upwards of 80 per cent for organisations across both the private and public sector.

It came into being after the Scottish Government in 2014 unveiled new procurement laws lowering the threshold for public sector contracts having to go through the full tender process. The minimum amount fell to £50,000 from £164,000, and Morrison was of the view that small firms who found themselves facing the new regime would need help.

He wanted to bring them the advantages of an in-house bid team, but only charging on an as-needed basis – and the firm is this year set to see turnover break through the £1 million mark. Just weeks ahead of its fifth anniversary, it has secured £1.4 billion in total contract value to date.

Asked whether the AM in the name stands for its founder’s initials, it can apparently “stand for a few things – the main one is that we finish our bids in plenty of time”.

Morrison branched out on his own after building up an extensive CV. It started with a focus on housing with Falkirk Council and later West Lothian Council, with the latter putting him through his housing degree at the University of Stirling, and also seeing him work under Martin Armstrong, who now leads Glasgow-based housing, care and property-management group Wheatley.

Morrison later moved to City of Edinburgh Council, and started to get involved in putting contracts out to tender – commissioning services, and marking bids and sitting on tender evaluation panels.

He then made the leap into the private sector, joining the ranks of Slough-based lettings and property-management specialist Orchard & Shipman, which in 2005 won a major tender for private sector leasing in Edinburgh, tasked with finding 1,500 properties by 2010.

Morrison was appointed to head up that contract, which he says was the first of its kind in Scotland, and he took up the company’s offer to move into more of a business development role, helping the organisation win contracts in Scotland, London and other parts of the country.

He later moved to British Gas, which was looking to return to bidding for social housing maintenance contracts – his experience fitted the bill, and he found himself working on behemoth bids such the £200m Warm Up North tie-up with nine local authorities in northeast England.
“Working for a FTSE 100 business really upped my bidding expertise,” Morrison states, explaining that he was working with legal, commercial, and contract teams, for example.

But the spark of his entrepreneurial dream had by then already been ignited. “I went into British Gas knowing that I wanted to set up my own business, but knowing that there was something missing within my knowledge.”

If he could get working for a large firm on the nitty-gritty of major bids under his belt, “I would then at some future point be able to take that into starting my own business,” he thought.

The Scottish procurement law change was the “catalyst” for AM Bid’s formation – and he notes that north of the Border, some £12bn of public sector goods and services work goes out to tender every year (as does some £240bn UK-wide).

“This is now the time to do it,” he thought about creating the firm, adding that he had a “very clear vision”, meticulously mapping out a budget and projections. And work came through the door very quickly. “From the very first month, I was able to start billing out clients.”

The firm has taken a sector-agnostic approach, and Morrison says it has worked in at least 25 different such areas to date. “Our expertise is in telling their story in a way that will resonate with evaluation panels and buyers,” he says, with the firm able to provide tactical and commercial advice.

“We know what brilliant bid answers look like… we’re able to tease out of our bidders the ‘nuggets’ that they need to put into their bids.” And sometimes, not bidding at all can be the “right” bid, if a firm’s offering isn’t quite at the right stage yet.

The tender process has come under close scrutiny in recent years, with Morrison highlighting the collapse of outsourcing giants Carillion and Interserve. The latter – which had been given Scottish projects including the £22m redevelopment of the Scottish National Gallery in Edinburgh – was the subject of criticism after continuing to be given major contracts despite a string of profit warnings.

“It’s going to be interesting just to see how all of that plays out because there are obviously other headwinds out there. The banks are less keen to lend now within some sectors because of company failures.”

He cites factors such as currency market fluctuations and shortages of EU labour as potentially affecting prices.

And he sees that while the public sector faces a tight squeeze on its purse strings, there is a danger of going for too economical an option that can ultimately cost the taxpayer more – “buy cheap, pay dear”, as the phrase goes – to rescue floundering contracts.

AM Bid has ten staff in Edinburgh, Glasgow, Manchester and London, complemented by a pool twice that size of associates across the UK and Ireland.

Its core offering is bid writing and management, but also encompasses training, and bid strategy development, for example.

Among its top brass is David Gray in the role of bid development director. Morrison had hired and trained him at Orchard & Shipman, and Gray has been included in The Association of Proposal Management Professionals’ “40 Under 40” class of 2019.

He was recognised for helping drive the firm’s year-on-year business growth (73 per cent in 2017 and 57 per cent last year). The company says that now being on track to be a £1m firm this year with no investment or debt is something less than 0.6 per cent of businesses achieve in their first five years.

This year will see the firm breaking new ground. As well as attracting the smaller firms Morrison was targeting when it started out, its client roster includes some bigger regional and national businesses, including some FTSE 100 organisations. “We are starting to work on larger bids,” states Morrison.

AM Bid is registered in North Berwick and currently sees staff work remotely, from home or in clients’ offices.

It will be one of the first tenants of flexible office space firm WeWork’s new city-centre site in Edinburgh – a move Morrison says will help boost brand awareness and attract millennial workers as it looks to up headcount.

It works with companies via the likes of business coaching service ActionCoach and investment firm BGF (Business Growth Fund), and is starting to get more involved with the Federation of Small Businesses and give businesses advice on opportunities.

And Morrison, who was last year named Emerging Director of the Year by the Institute of Directors Scotland, has long had succession planning at the forefront of his mind – Gray is set to take the MD seat in October.

Morrison will move into a business development director role, focusing on growing AM Bid – but also starting to examine his own exit strategy, amid plans for “some kind of business sale” in the next three to five years.

Among potential buyers he forecasts are the firm’s own management, another larger bidding company down south, a Big Four accountant or sizeable management consultancy, or from somewhere within the private equity space. In the meantime, the organisation – which works with the likes of Scottish Business Network – is looking to expand beyond Scotland.

As for where its main pressure points are, Morrison cites trying to harness the many opportunities out there, scaling the business while maintaining quality – with potential moves including taking on external funding. “There’s plenty for us to be thinking about.”