We wanted to highlight just some of the exciting examples of what we are doing at over 70 sites around Scotland to deliver our commitment to achieve net zero emissions by 2040.

In future issues, we will be sharing more examples that we will be implementing to further meet the challenge.

Some of our renewable projects:

A ground-breaking energy hub which will deliver low-carbon heat to a Stirling community was recently welcomed by First Minister Nicola Sturgeon. She toured the new energy centre which harnesses heat from waste water through a mixture of cutting-edge technologies – the first in the UK to deliver heat this way. 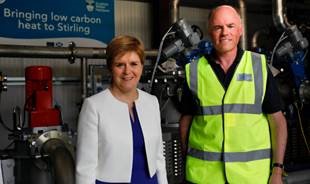 The facility pumps low-cost and low-carbon heat generated from waste water from the adjacent treatment works. It will save 381 tonnes of carbon per annum – the equivalent of a passenger jet flying from Glasgow to Sydney 82 times.

By way of a district heat network, the scheme will deliver low-carbon heat and energy cost savings to a number of key public buildings in the city. The £6 million project was delivered by Scottish Water Horizons – our commercial business which encourages growth and investment in renewable technologies – in partnership with Stirling Council with additional funding from the Scottish Government.

This is one of a number of heat from waste water projects actively being explored, including the installation of a heat recovery scheme at Aqualibrium leisure centre in Campbeltown which is due to be commissioned in early 2020.

A total of 674 panels are now in place providing around a third of the site’s electrical needs from renewable energy. John Sammon, Team Leader, says “Customers in Inverness-shire can now enjoy their water with lower impact on the environment than ever before.”

This carbon reducing technology will offset 14% of the electricity required to operate the facility with the new solar PV system generating the amount of energy needed to power 40 homes for a year.

New information boards have been put up at Holm Point Waste Water Treatment Works near Stornoway to highlight the energy savings being made on site thanks to 15 wind turbines.

They set out how the turbines offset 35% of the site’s energy consumption, as well as exporting to the National Grid during windy periods. 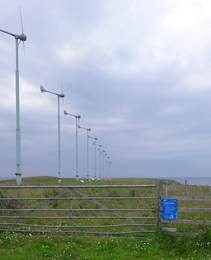 The small 5kW turbines, installed five years ago, give a total capacity of 75 kW on site and generated 258,000 kWh during 2017 – the equivalent usage of 83 households.

Scottish Water now has wind turbines on six of its operational sites in the Western Isles, utilising the best natural resource in the islands – wind.

A waste water treatment works in the Borders has become one of our most self-sufficient energy sites. Galashiels Waste Water Treatment Works now generates more energy than it uses.

It generates the electricity from sewage sludge, the semi-solid by-product of waste water treatment, using a technique called combined heat and power (CHP).

The site has to import a small amount of power when the CHP needs maintained, but the consumption of imported power has dropped by two thirds since CHP was installed three years ago.

Brian Reavely, a Site Operator there for 27 years, says his proudest achievements is seeing how the site has transformed the way it operates by “becoming as green as it can be whilst providing an essential service to customers.”

It’s described as a “hidden jewel” – most people in Scotland’s capital will have no idea it exists. Yet Edinburgh is home to the country’s only treated water hydro-electricity site located in a major town or city.

Firrhill water service reservoir in the heart of Oxgangs supplies drinking water to Edinburgh – and generates electricity as a by-product. It generates enough energy to supply the National Grid and the energy from the site will be used locally including by a large secondary school and care home. 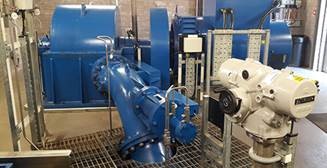 For the last four years the reservoir has harnessed modern day energy technology to provide all of the site’s electricity. Energy is harnessed from the flow and pressure of water arriving at the site, powered through the hydro turbine inside a small powerhouse. A 160 kW Turgo Impulse Turbine machine, sits next to a generator at the site, which harnesses the pressure and converts this to energy.

The clean drinking water flows by gravity from Glencorse Water Treatment Works, near Penicuik, coming into the site via large blue pipes at a speed of 222 litres per second. Because no pumping is required throughout this journey and thanks to it generating energy on the way, the drinking water in the area has a particularly low carbon footprint.

Across Scotland almost one million tonnes of food waste is generated annually creating a major source of greenhouse gases when sent to landfill. Scottish Water Horizons’ anaerobic digestion (AD) plant at Deerdykes, near Cumbernauld, is capturing some of this waste to generate renewable heat and power and produce a valuable agricultural fertiliser. 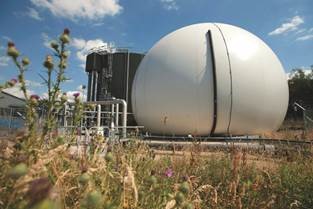 Commissioned in 2010, the facility is capable of handling 30,000 tonnes of food waste and generating up to 8,000 megawatt hours of energy each year – enough electricity to power 2,000 homes. Built on the site of a redundant waste water treatment works, the plant uses modern AD technology to break down waste during a biological process in sealed, oxygen-depleted tanks to produce an energy-rich biogas and a natural fertiliser.

The biogas fuels two combined heat and power (CHP) engines, with a total installed capacity of 1.5 megawatts (MW) of electricity generation. The electricity powers the on-site offices and the plant itself, with any excess being fed into the National Grid. To date the plant has recycled over 145,000 tonnes of food waste into green electricity.

Ross-shire is set for a renewable energy boost thanks to Scottish Water Horizons’ new solar power scheme. Work to install 342 solar photovoltaic (PV) panels on the roof of our water treatment works that serves communities around the Cromarty Firth has been successfully completed. 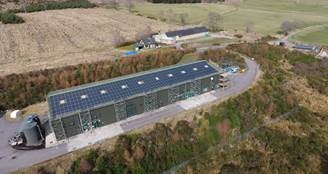 The site, just outside Evanton, provides drinking water from Loch Glass to around 30,000 customers across Easter Ross, Dingwall and the Black Isle. The panels are expected to offset 12% of the works’ total electricity consumption, both reducing the impact on the environment and lowering energy bills.

Scottish Water’s office at The Bridge at Buchanan Gate Business Park in Stepps is one of the most environmentally-friendly buildings of its kind in Europe.

Opened in 2013 and home to 600 staff, it was designed with energy-efficiency in mind and is home to a biomass boiler, solar thermal water heating and solar photovoltaic (PV) panels on the roof. These technologies utilise renewable technology to provide heating, hot water and electricity.

All the windows in the building are set to recognise when ventilation is required and open and close automatically. The site is also now home to thousands of bees where a hive is located in the grounds and the honey produced is sold in the restaurant as an accompaniment to porridge.