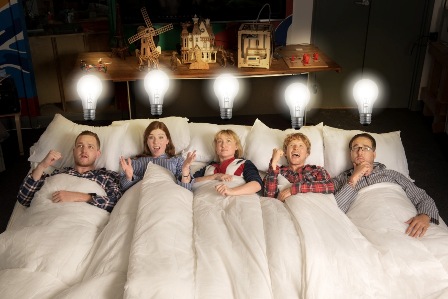 Scots are most likely to be struck by their best ‘lightbulb moment’ ideas when in bed, according to new research from Barclays Business1, with a third (34%) of the nation’s budding entrepreneurs naming it as the most inspiring place to dream up a new business concept. This is followed by the great outdoors (19%), while when travelling (13%), having a cup of tea or coffee (13%) and in the shower or bath (13%) all shared third place.

825,000 Scots say they have had an idea to start the ‘next big thing’ but didn’t pursue it2.   A whopping 10.9 million Brits (21%) are in the same boat. What’s more, over half of those (54%) say they saw someone else launch the same idea at a later stage. Those that ‘missed out’ estimate their idea could have made them £62,000 richer (on average) – a collective total of £265billion – if they had launched their idea themselves.

Funding was named across the UK as the top reason why business ideas are not pursued, with over half (51%) of those polled saying insufficient funds was a major factor in them not pursuing their ideas. Not knowing where to start (42%) is the second biggest factor, followed by lack of confidence (38%) and not having the right kind of knowledge (34%).  Not having access to the right tools and equipment (20%), along with lack of space (15%), were other reasons given.

The need for more mentoring also emerged as an important factor for a quarter (25%) of future entrepreneurs – the UK’s business dreamers say they would need four hours a week on average with a mentor to help them turn their ideas into reality.

Richard Heggie, Head of High Growth & Entrepreneurs at Barclays, said: “Every great entrepreneur starts with their ‘Eureka moment’ and our poll shows that Scotland is home to a wealth of inspired thinkers. It’s essential that the industry does all it can to harness and encourage this creativity. Not having access to lending, or to the right tools, advice and guidance simply shouldn’t be a barrier holding back the UK’s future disrupters and pioneers.

“With Eagle Labs we have launched Incubator spaces to help develop ideas, build confidence and networks, in addition to our £200million fund for scale up businesses.”

Barclays is passionate about helping entrepreneurs fulfil their business ambitions and scale-up potential. Barclays’ Eagle Lab Incubator spaces have been launched with this in mind, providing the space, tools and guidance to develop creative concepts and support budding entrepreneurs to scale. Barclays’ £200 million venture debt fund has also been established to help the UK’s high-growth firms to compete with Silicon Valley.

Today, Barclays has announced plans to extend its Eagle Lab network to new sites, including those ‘coming soon’ in Norwich, Notting Hill and Jersey, while Salford and Huddersfield are in development stages. This builds on the existing sites in Brighton, Bournemouth, Birmingham, and two in Cambridge.