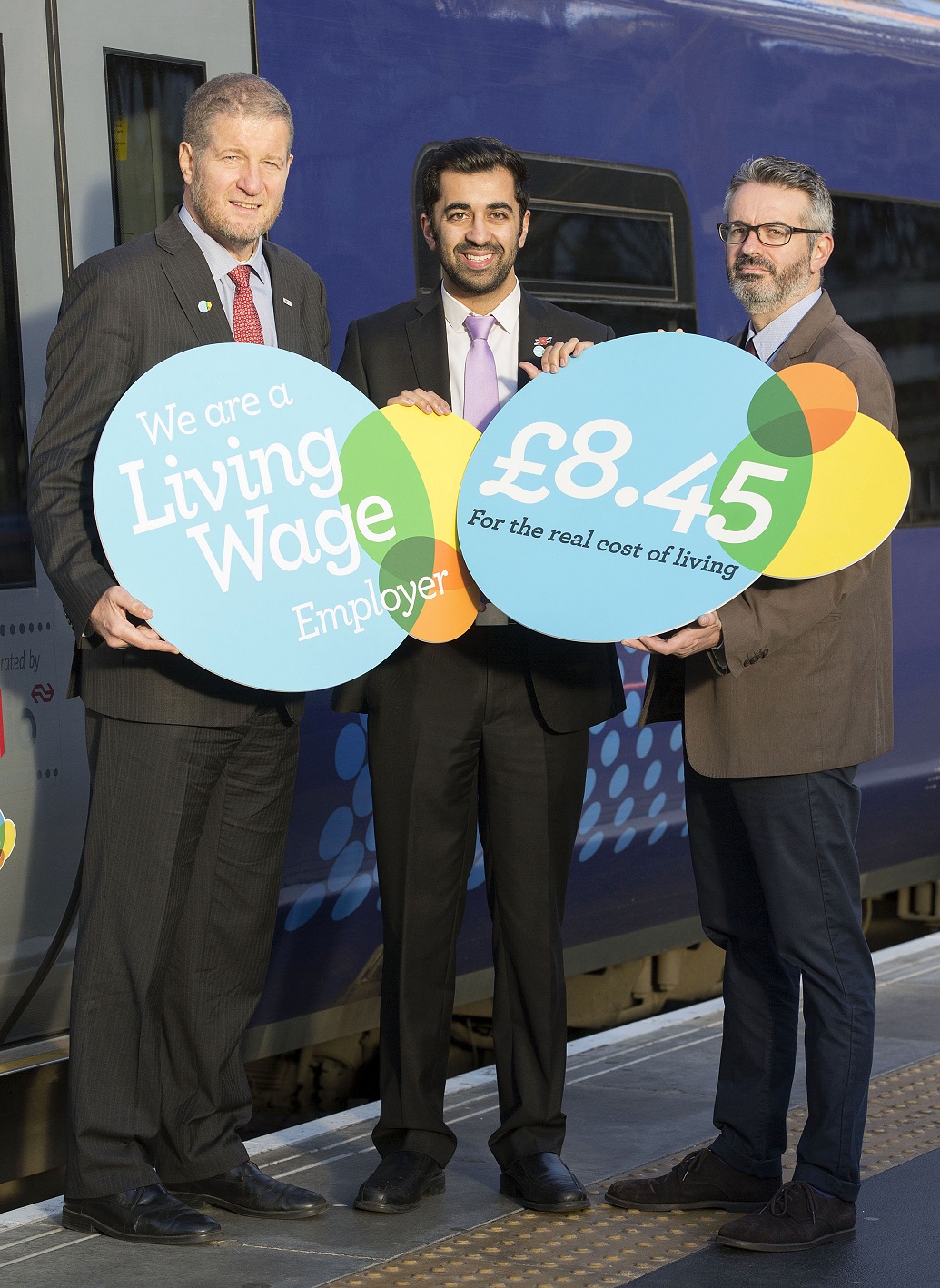 To mark Living Wage Week 2016, ScotRail has reinforced its position as a Living Wage Employer by committing to adding the logo to every train in the fleet. Mr Humza Yousaf MSP, Minister for Transport and the Islands, unveiled the first logo on a train at Glasgow Central station today (1 November 2016). This visible pledge follows confirmation that the real Living Wage outside London has risen to £8.45, up from £8.25 per hour. In March 2016, ScotRail became the sixth largest organisation in Scotland to become a Living Wage Accredited Employer. This resulted in a pay-rise for 150 employees within Abellio ScotRail’s sub-contracted cleaning and maintenance services contracts, and for staff undertaking initial 12 week ‘gateline’ training.  Yesterday’s rise in the Living Wage will mean a further increase in pay.

James Traynor, a cleaner at ScotRail’s Eastfield depot in Glasgow, said: “The Living Wage has made a big difference.  I feel I now have a life, can pay the bills, buy better food and can take the wife out now and again.”

Mr Yousaf said: “Abellio ScotRail is to be applauded for its long-term commitment to paying its employees the Living Wage. The Scottish Government has long championed the payment of the Living Wage, recognising the real difference it can make to the lives of employees. Scotland is leading the way in the UK, with 80% of workers in Scotland now earning at least the living wage. There are many businesses like Abellio ScotRail across Scotland who are also benefiting from paying the Living Wage through better staff morale and increased productivity. Investing in your workforce through the Living Wage is not just the right thing to do it makes good business sense.”

Phil Verster, managing director of the ScotRail Alliance, said: “By adding this logo to our train, we are demonstrating that paying the real living wage is a long term commitment and important recognition of all colleagues for the important work they do for customers and Scotland’s Railway. We are tremendously proud that every one of our 5000+ employees now earns the real Living Wage.”

Peter Kelly, Director of the Poverty Alliance said: “I am delighted that ScotRail are going the extra mile to mark Living Wage Week and their accreditation. I hope the Living Wage branding will inspire those employers travelling on trains across Scotland to get in touch with the Scottish Accreditation Programme in order to help their staff, sub-contractors and third party staff benefit from the real Living Wage of £8.45. There are 430,000 people in Scotland who deserve a real Living Wage that’s based on the cost of living.”