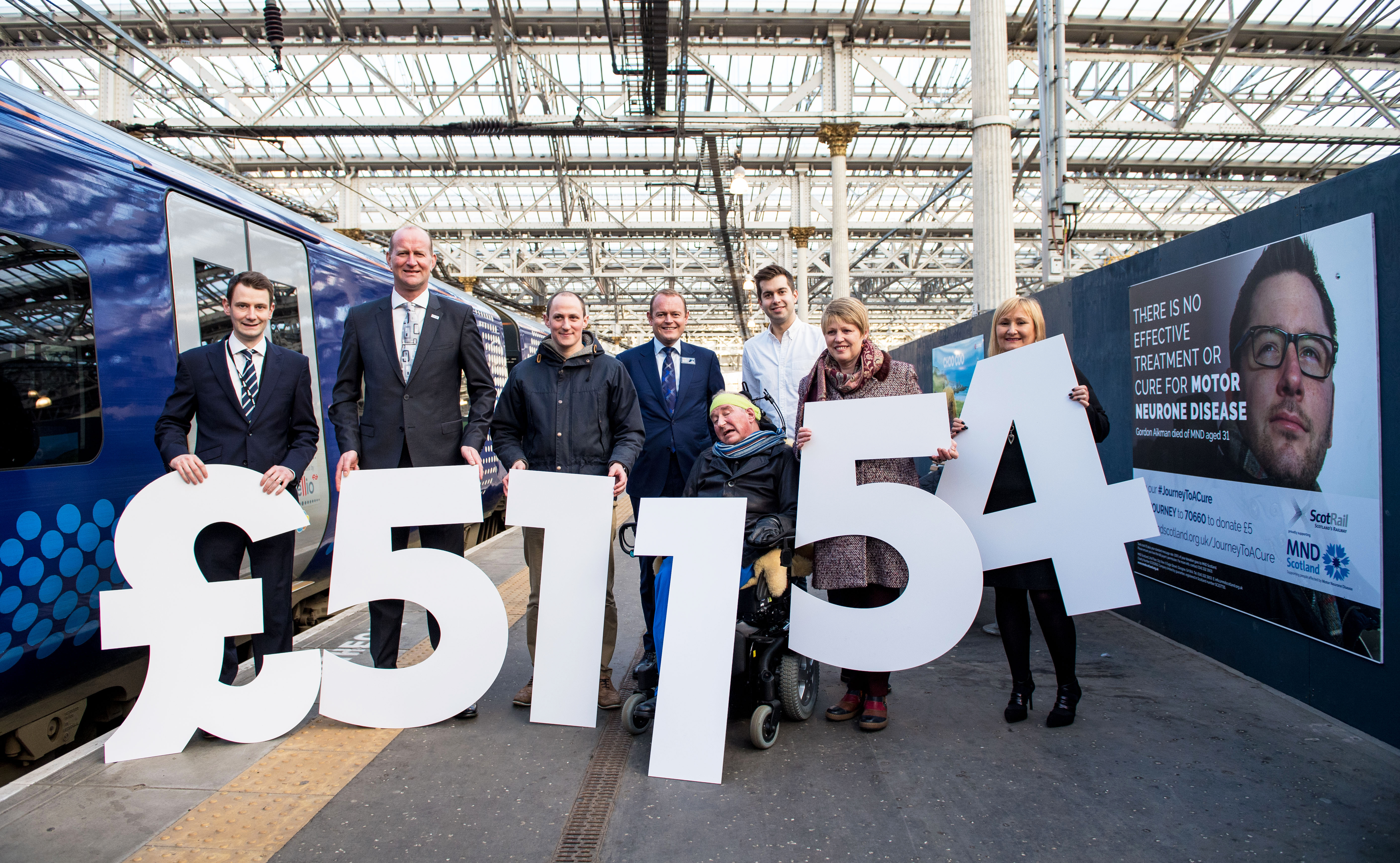 The ScotRail Alliance has already smashed its MND Scotland fundraising target for 2017/18 after just seven months.

The organisation raised £51,154 for charity partner MND Scotland between April and October this year – well ahead of the target of £50,000 by March 2018.

Almost half of the total was raised by ScotRail Alliance staff, who took part in a wide range of fundraising events – including a sponsored skydive, walking over hot coals, and a staff football tournament.

When the partnership between the ScotRail Alliance and MND Scotland was announced in March, a target of raising £150,000 over three years was set.

Collection tins have been placed at every station ticket office, and station and on-train advertising spaces have been given to the charity free of charge. MND Scotland staff have also been issued with free on-duty travel passes, reducing their overall travel costs.

To raise awareness of the disease, as well as MND Scotland’s work to find a cure, new advertising boards have been erected on the hoardings surrounding the site in Edinburgh Waverley, where work is currently ongoing to build and extend platforms.

The boards feature prominent MND campaigner Gordon Aikman, who passed away from the disease earlier this year. Gordon, originally from Kirkcaldy, raised over £600,000 for MND Scotland through his ‘Gordon’s Fightback’ campaign, which also managed to double the number specialist nurses for MND patients and ensure they were paid for through the NHS instead of charitable donations.

More money is expected to be raised next month, when a staff Christmas jumper day will be held in aid of the fight against motor neurone disease. ScotRail Alliance staff across the country are being encouraged to ‘do their bit in a festive knit’. Volunteers will be collecting donations in Inverness, Aberdeen, Haymarket, Edinburgh Waverley and Glasgow Queen Street stations.

ScotRail Alliance managing director Alex Hynes said:
“MND Scotland is an absolutely fantastic organisation that is doing some great work to support motor neurone disease patients and their families, as well as working to find a cure.
“I’m exceptionally proud of how much we’ve managed to raise for MND Scotland in just seven short months. It’s important that we do all we can to raise awareness of this cruel disease, and keep up the fight for a cure.”

Joe Pike, husband of the late Gordon Aikman, who died from motor neurone disease in February, said:
“It is hugely impressive that the staff of ScotRail Alliance have raised so much so fast for MND Scotland.
“Every penny will go to helping those living with Motor Neurone Disease, as well as funding vital research, so we find a cure and others don’t have to go through what Gordon did.”

Morag McGown, Corporate Partnerships Manager from MND Scotland, said:
“I am truly grateful to every single ScotRail Alliance employee and customer who helped us reach this incredible target so early in our three year partnership.
“The funds raised are already making a huge difference to the lives of people affected by MND across Scotland and going towards MND research, which is vital to helping us on our journey to a cure.
“In addition, the awareness that has been raised amongst staff and commuters is fantastic – we need to ensure everyone in Scotland knows the life-changing impact MND has and what we can all do to make a difference.
“I’d like to thank everyone involved for their continued support and I’m looking forward to working together to hit our next target.”