ScotRail Alliance customers and employees have raised more than £71,000 for the fight against Motor Neurone Disease in just twelve months.

Easter Sunday marks the first anniversary of the partnership between the ScotRail Alliance and MND Scotland. The partnership with the charity, which is working to find a cure for the terminal disease, set a target of raising £50,000 for each year of the three-year agreement.

The ScotRail Alliance has smashed that target, with £71,000 raised in the first year alone. People from the ScotRail Alliance took part in range of events, including sponsored skydives, abseils from the Forth Rail Bridge, and a Christmas jumper day to help reach the figure.

Collections were held across the network, and more than 350 donation tins were placed at stations. The charity was also given free access to advertising spaces on trains and at stations.

Staff and volunteers at MND Scotland were given on-duty travel passes to reduce their travel costs, allowing them to travel to support groups, political conferences, and fundraising and information events free of charge. They also visited 83 offices, stations, and depots as part of their drive to raise awareness of the disease. 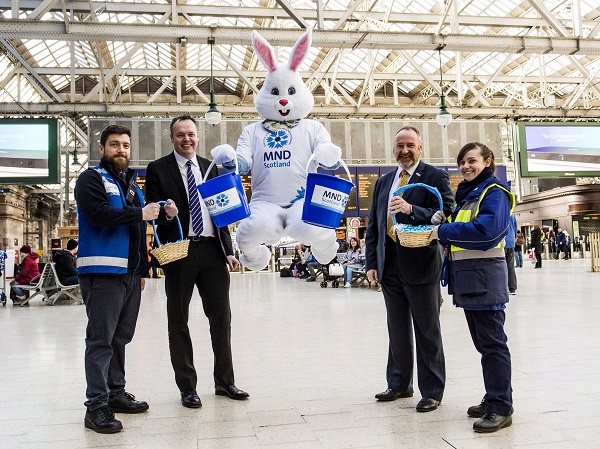 “The work that MND Scotland does for patients and their families, and their research into a cure, is just fantastic. We’ve had a brilliant first year supporting MND Scotland as our charity partner.

“To have raised £71,000 and surpassed our fundraising target is a great result. I’d like to thank our customers and employees for their exceptional generosity.”

“I’m thrilled that our ‘Journey to a Cure’ with the ScotRail Alliance has been such a huge success in the first year of our partnership.

“The commitment of the ScotRail Alliance’s people over the past year has been amazing. ScotRail employees have thrown themselves out of planes, hot-footed it across fiery coals, and rattled buckets across Scotland’s rail network, to help us raise the profile of Motor Neurone Disease.

“Every penny of the incredible £71,000 they have helped raise so far will go towards funding care, information, and support services for people affected by MND in Scotland, as well as funding cutting-edge research into a cure.

“I can’t wait see what we achieve together in the year ahead.”