The ScotRail Alliance has installed a commemorative plaque at Shotts station to mark the 150th anniversary of the opening of the line between Glasgow and Edinburgh via Shotts. 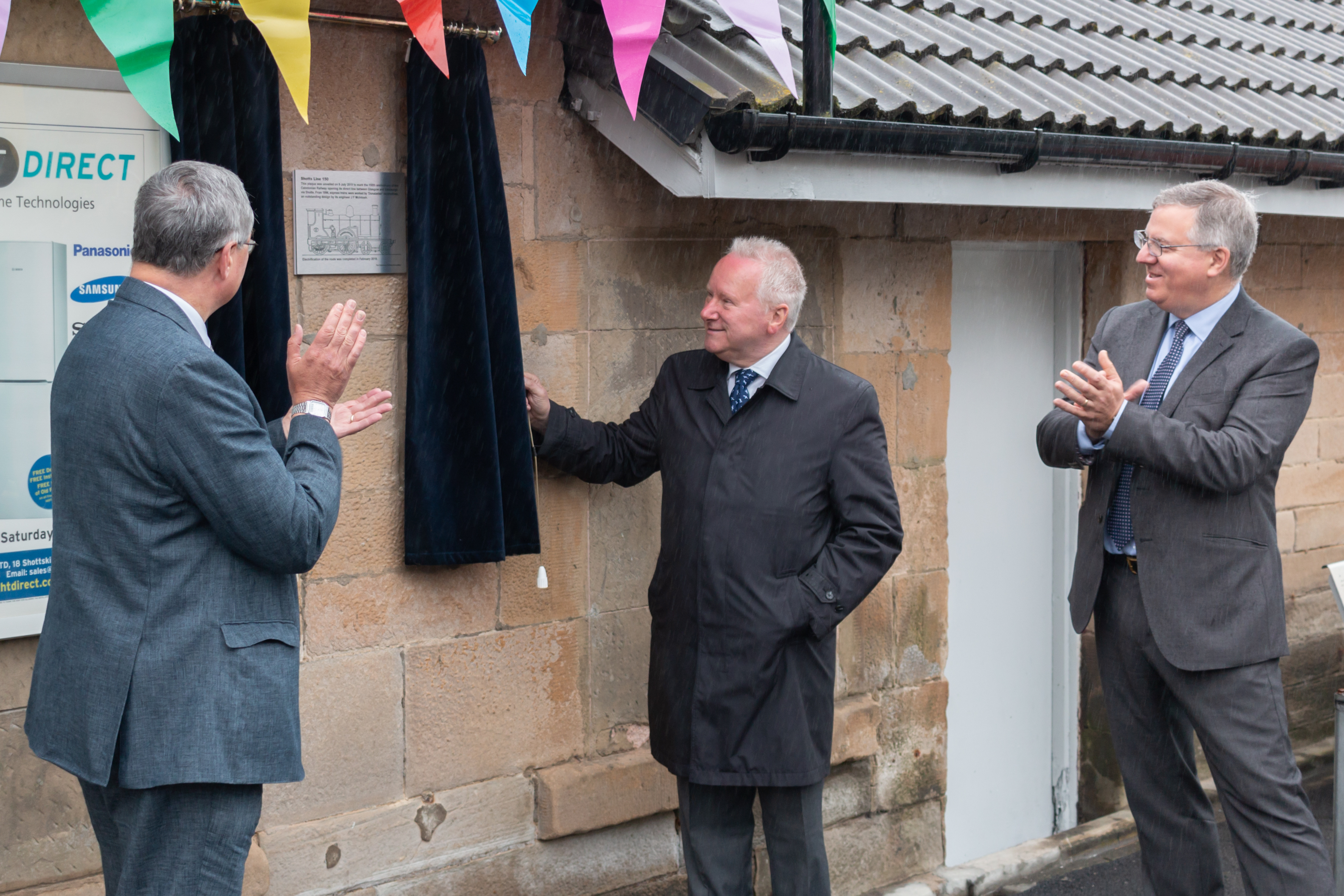 Unveiled by Alex Neil, MSP for Airdrie and Shotts and Transport Scotland Director for Rail Bill Reeve, at an event earlier today, the plaque reads:

“This plaque was unveiled on 9 July 2019 to mark the 150th anniversary of the Caledonian Railway opening their direct line between Glasgow and Edinburgh via Shotts. From 1869, express trains were worked by Dunalastair locomotives, an outstanding design by its engineer J F McIntosh.”

ScotRail handed out cupcakes to customers travelling from the station, who were also entertained by a piper during the plaque unveiling ceremony.

Construction of the Shotts line by the Caledonian Railway in 1869 shortened the distance between Glasgow Central and Edinburgh Princes Street, from 69 to 46 miles.

This enabled the route to compete with the North British Railway operated Edinburgh to Glasgow mainline via Falkirk for coal and shale-oil traffic, as in those days, railways raised most of their revenue from freight operations.

By the early 1960s the coal and shale-oil industries were in severe decline, and while the biggest steam locomotives still used the route, the Beeching Report recommended withdrawal of passenger services. The line was saved from closure following a campaign supported by local MP Margaret Herbison.

In April 2019, Network Rail completed the Scottish Government funded £160m electrification of the line. The successful delivery of the project created a fifth electrified route between Scotland’s largest cities.

This paved the way for ScotRail to run brand-new electric Class 385 trains along the popular route in May 2019.

Electric trains also mean no diesel engines, resulting in quieter journeys for customers and reduced noise pollution for those living and working near the railway.

“The Shotts line has been a phenomenal success and the recent improvements – the electrification of the route and introduction of brand-new trains – have been transformational for the area.

“More local people are using it and we’re delighted to be celebrating the line’s 150th anniversary.

“As we continue our work to deliver the best for Scotland’s Railway, we will continue to make a difference to the communities we serve.”

“I am honoured and delighted to being unveiling this plaque.

“The electrification of the railway through Shotts, coupled with the recent M8 upgrade, makes Shotts one of the best-connected towns in Scotland.

“Our job now is to use this new level of connectivity to bolster new jobs and industry in our area.”

“It’s right to celebrate one hundred and fifty years of the Shotts line and station – connecting communities with opportunities for work, study and leisure.

“The Scottish Government’s ambitious programme of electrification is delivering faster, greener trains with more seats and services. Shotts now has its best ever train service. It has never been easier to make the switch from car to rail.

“As we celebrate our history, passengers can be confident the Shotts line has a strong future.”