90% of the senior businesspeople polled in a major new Scottish Chambers of Commerce survey say they are unlikely to change how they will vote before the June 23rd referendum.  SCC’s detailed findings indicate that 68.3% of businesspeople polled would vote to Remain, down slightly from 69.4% in February 2016, and 22.9% would vote to Leave – up from 19.2% on SCC’s previous survey. The data on voting intentions also shows some divisions based on size and export interests. Those trading with both EU and non-EU markets express the strongest support for ‘Remain’, with the strongest levels of support for ‘Leave’ among those that either do not export or only export outwith the EU. Businesspeople representing medium and large firms are more likely to vote ‘Remain’ than those in small and micro businesses.

The findings, from an April 2016 survey of 357 leading businesspeople, also show that individuals are now strongly committed to their voting preferences. Just 0.3% of respondents said they were uncommitted, and only 9.7% said they could change their mind.  Commenting on the results, Liz Cameron, Chief Executive of Scottish Chambers of Commerce, said:

“With the Scottish Elections now over and less than 50 days to go until the electorate decide the UK’s status within the European Union, both campaigns are ramping up their visibility and messaging to secure the ‘business vote.’  “From a Scottish perspective, of those surveyed, a high number of businesses (68.3%) support the option to remain within the European Union. This position changed minimally by 1% point from the previous survey in February, whilst those voting to leave generated a 23% response, an increase of 3% from February’s result.  “Interestingly, the views in the rest of the UK are tightening, with the gap closing between the Remain and Leave votes, with 54% supporting and 37% wishing to exit.

“The majority of businesses who took part indicated they would not be changing their views. “Once the vote has been taken, we would again urge both the Scottish and Westminster Parliaments to get back to running the Country ensuring that every piece of policy and legislation is supporting business growth. Delays have already impacted our economic growth and urgent action is needed”.

Key findings in the survey: 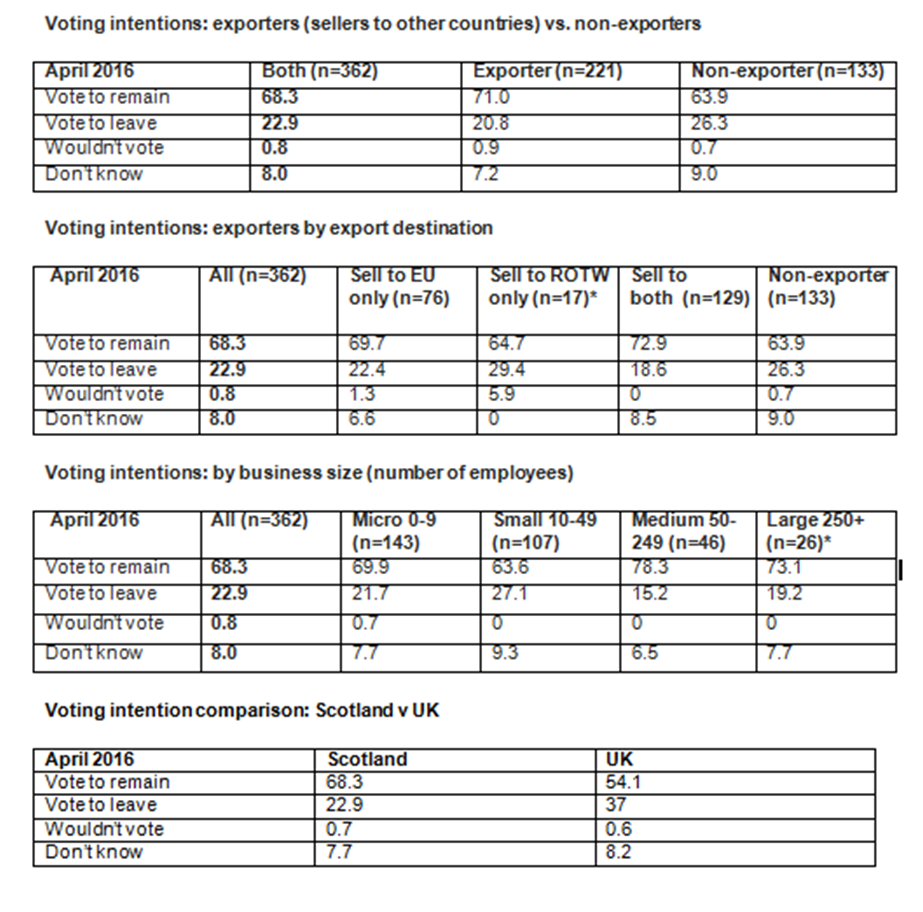 NB – Differences in respondents occurred where businesspeople either did not specify size or export orientation, or did not answer the question.

*Figure should be treated with caution due to sample size.

Methodology
This survey was conducted online between April 5th and 14th 2016, and received 362 responses in Scotland and 2231 across the UK as a whole. Chamber members across the country were invited to participate in the survey. Data at a UK level has been weighted to reflect the proportion of businesses in each of the UK’s regions and nationally, in line with the Department for Business, Innovation and Skills Business Population Estimates for 2015. Firms were asked in the April 2016 survey whether they ‘sold’ rather than ‘exported’ – to better take into account exposure to international markets through warehouse sales, or supply chains.

Both SCC and the BCC have adopted a strictly neutral position in the EU referendum debate, and have not registered as campaign organisations for either side with the Electoral Commission. The survey questions were carefully designed specifically to reflect the Chambers of Commerce’s neutral position and to avoid eliciting responses favourable to either outcome. The survey questionnaire was submitted for scrutiny to the Electoral Commission.

Make up of businesses in survey:

SCC previously conducted an online survey between January 25th and February 4th 2016 and received 458 responses. Click here for the results of the previous survey.