According to the latest Royal Bank of Scotland PMI®, private sector activity in Scotland fell at an unparalleled rate during April. Inflows of new business declined the most on record, as the COVID-19 pandemic continued to clatter the private sector economy. As was the case in March, services recorded a quicker decline than manufacturing, although both sectors saw the most marked reductions in activity on record.

Meanwhile, with substantial uncertainty surrounding the coronavirus outbreak, the 12-month outlook for activity remained negative for the second month running.

The seasonally adjusted headline Royal Bank of Scotland Business Activity Index – a measure of combined manufacturing and service sector output – fell from 29.7 in March to a fresh series low of 10.7 in April, and signalled the most substantial contraction in private sector activity in the 22-year survey history. The combined drop in the index from February was a considerable 39.4 points.

Private sector firms recorded a back-to-back reduction in total new business during April, with the rate of contraction accelerating further to a fresh series low. According to respondents, the COVID-19 pandemic and subsequent emergency measures had led client demand to plunge.

The fall in Scotland was part of a wider UK trend in April. New business dropped at the quickest pace on record at the UK level, although the fall was softer than that seen in Scotland.

Amid the considerable contraction in client demand, firms reduced workforce numbers further in April. The rate of job shedding was the quickest recorded in the series more than 22-year history.

The level of outstanding business declined further, however. The rate of backlog depletion was the fastest on record.

For the first time since January 1999, private sector firms in Scotland highlighted a reduction in input prices during April. Panellists linked the decline to lower fuel, oil and staff costs.

At the same time, average selling prices fell for the second month running, with the rate of reduction the quickest on record and marked. According to panellists, the fall was due to a combination of lower costs and discounting as a result of efforts to attract clients.

Private sector firms in Scotland remained pessimistic regarding activity over the coming 12 months during April. Anecdotal evidence frequently mentioned huge uncertainty surrounding the COVID-19 pandemic and its economic implications. Sentiment did pick up slightly from March’s low, however. 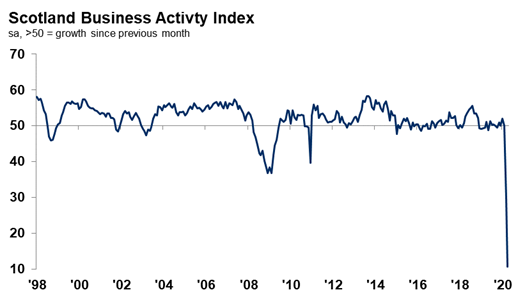 “The COVID-19 pandemic continued to cause severe repercussions for the Scottish economy in April, with latest data pointing to an unprecedented reduction in private sector activity. Services bore the brunt of the downturn for a second month, although both service providers and manufacturers recorded record contractions in business activity.

“Incoming new business declined at the most marked rate in over 22 years of data collection, with firms mentioning that demand both domestically and from abroad had collapsed. Unsurprisingly, the 12-month outlook for activity remained negative for the second month in a row, amid substantial uncertainty surrounding the economic fallout of the pandemic, although firm’s expectations did pick up slightly from March’s recent low.

“The COVID-19 induced downturn formed part of a wider UK trend in April, but Scotland fared worse than the UK as a whole, with the decline quicker than at the national level. Although there is some discussion of an exit plan from the current quarantine restrictions, it is unlikely that the economy will recover quickly from such a severe downturn.”