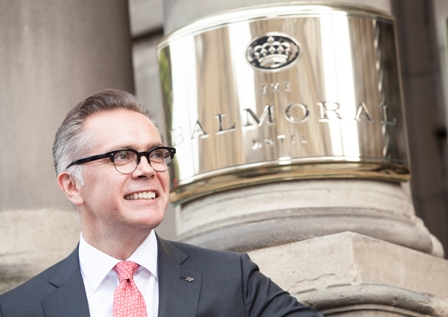 Richard Cooke has been appointed the position of General Manager of The Balmoral, the iconic Rocco Forte Hotel situated in the heart of Edinburgh. Mr Cooke brings 23 years of experience in hospitality management across a variety of five-star properties in Canada, USA, South East Asia and China.

Mr Cooke will be responsible for the day to day operations and strategic direction of the hotel, including 168 rooms and 20 suites; the hotel’s Michelin-starred restaurant, Number One; all-day dining venue Hadrian’s Brasserie; the iconic Afternoon Tea lounge Palm Court; the hotel’s dedicated whisky bar, Scotch; The Balmoral Bar; The Balmoral Spa and the hotel’s meeting and conferencing offerings.

Mr Cooke started his hospitality career in the UK before moving to New Zealand and the Regent Hotel in Auckland. He subsequently moved to the U.S where he held the position of Executive Assistant Manager at The Ritz Carlton in Dearborn, Michigan and The Ritz Carlton in San Francisco before moving to Rosewood Hotels and Resorts in Dallas as Director of Food and Beverage.

On his appointment at The Balmoral, Mr Cooke said:

“I am delighted on so many levels to take up this position. I get the chance to work with legendary hotelier Sir Rocco Forte. My dream has been to manage an iconic hotel, which the Balmoral without question is and I fulfill this in a city I have fallen in love with over the past few years.”