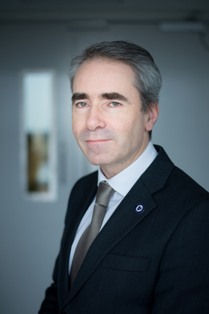 Queen Margaret University (QMU), Edinburgh has appointed Dr Richard Butt as its new Deputy Principal in time for the start of the academic year. Formerly Dean of the School of Arts, Social Sciences and Management at QMU, Dr Butt has over twenty years higher education experience, including Head of Division for Media, Communication and Performing Arts at QMU, where he managed the design, development and delivery of undergraduate and postgraduate degrees in film, public relations and performing arts.

Dr Butt holds a PhD on Scottish documentary film from the Open University and QMU, as well as a BA (Hons) Film and Media Studies and English from Stirling University and University of California, Berkeley. As a representative from QMU, Dr Butt is currently a member of Universities Scotland International Committee, Scottish Graduate School for Arts and Humanities Board and Executive, Scottish Drama Training Network Board and Trustee on the Board of Newbattle Abbey College. Professor Petra Wend, Principal and Vice-Chancellor of QMU, said: “We’re delighted to welcome Richard as our new Deputy Principal.  His significant contribution to the institution over the last twenty years makes him the ideal candidate to help shape our future by providing academic leadership across the strategic areas of learning, teaching, research and knowledge exchange and internationalisation.

“Richard has proven himself as a dynamic advocate for the University and as an inspirational and authoritative leader, securing the trust and respect of colleagues, staff, students and stakeholders.” Dr Butt, 49, is married with two daughters and lives in Portobello, Edinburgh. He was born in Leigh-on-Sea, Essex and attended The Campion School in Hornchurch.  As a keen photographer and film-maker, he was Director of the Edinburgh Filmhouse Board of Directors from 2001 to 2009 and has been a Trustee of the Brunton Theatre in Musselburgh, East Lothian since 2013. Commenting on his new position as Deputy Principal at QMU, Dr Butt said: “I’m extremely proud to have been given the opportunity to take on this significant role at QMU and look forward to the challenges ahead. “My vision for the University is that by 2025 we will be recognised internationally for our high quality teaching and learning, as well as the world class status of our research.”

Dr Butt took up his new appointment at QMU on 1st September 2016.  He takes over from Professor Alan Gilloran who has retired from the position and the University this summer after a successful career in higher education spanning over two decades.