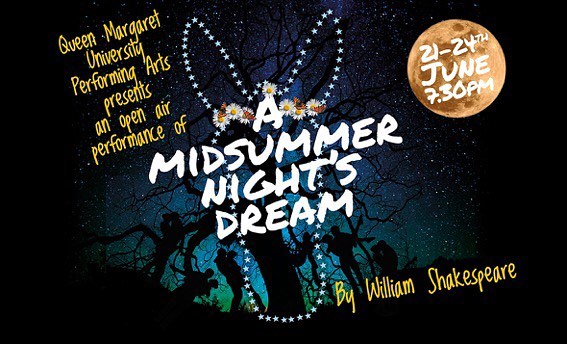 More than forty students from across Queen Margaret’s Performing Arts programmes are working with staff to create a truly magical evening of theatre, which is open to the public.

The show opens on Midsummer’s Eve (21st June) and runs for three performances in the grounds of QMU’s Musselburgh campus, before transferring to the beautiful Dunbar’s Close Gardens on Edinburgh’s Royal Mile on 24th June.

The show is directed and designed by the University’s award winning staff team; Kate Nelson, Sarah Paulley and Polly Lister.

Audience members are invited to bring along a picnic before seeing the show on campus, where a bar will also be open on the evenings of the show.

An open dress rehearsal on the morning of Tuesday 21st June will welcome children from local Musselburgh schools at a free performance and accompanying workshop.

The show will perform whatever the weather so audiences should come prepared.

Tickets are available from Eventbrite at £10 per person.