More than 30 MSPs have added their voices to SELECT’s rapidly-growing campaign for regulation of the electrical industry.

Some 32 new politicians have joined the swell of cross-party backing after Scotland’s largest trade association spent three days meeting MSPs and delivering its vital message about safety at Holyrood. The MSPs’ names will now be added to SELECT’s Wall of Support, which shows the many individuals and organisations supporting the crusade for Protection of Title.

Among the new supporters is Michelle Ballantyne, Conservative MSP for South Scotland, who said: “I am delighted to support this campaign because protecting title not only ensures standards and recognition in a profession, it provides reassurance and safety for the consumer.”

Ms Ballantyne, who is also Shadow Cabinet Secretary for Communities and Social Security, added: “In an age where we are increasingly reliant on electricity we need to know that someone who calls themselves an electrician is indeed suitably qualified and is not going to put our life or the lives of those we are responsible for at risk through lack of training.” 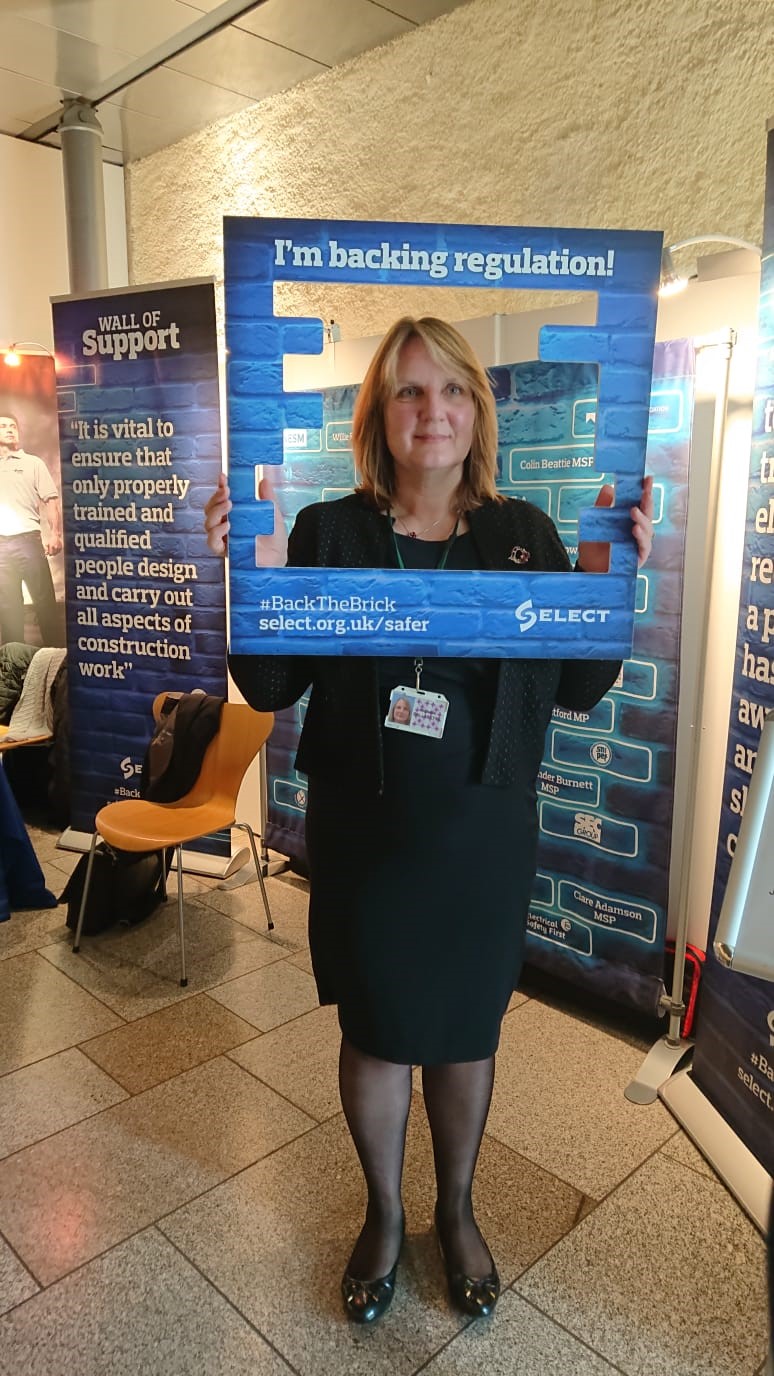 The new list of MSPs backing the campaign is:

SELECT Managing Director Alan Wilson, who attended the exhibition at Holyrood between 12-14 November, said: “We are delighted at this continuing groundswell of support and would like to thank all these MSPs for backing our ongoing campaign to make electrician a regulated profession.

“The response from every party has been extremely encouraging and it’s heartening to see that improving safety for consumers across Scotland is a priority for our politicians, no matter their party allegiances.”

SELECT Specifier and Client Relations Manager Yvonne Wilson, who organised the three-day exhibition at the Scottish Parliament, said she was also delighted with the response.

She said: “The event was a huge success and it was great to deliver our message in person and engage with MSPs from all parties. From their responses, it’s clear that regulation is a topic that interests politicians from all sides, and they share our concerns over the current landscape.

“We will now continue to raise awareness of this issue and work towards our ultimate goal – making it an offence for someone to call themselves an electrician when they have no, or inadequate, qualifications.”

The latest political endorsement comes as part of growing cross-party support for the SELECT campaign, with 41 of the Parliament’s 129 MSPs now signed up.

The Wall of Support has also had the backing of Dr Philippa Whiteford and Stephen Kerr who, until the dissolution of Parliament pending next month’s General Election, were MPs for Central Ayrshire and Stirling respectively.

Other bodies that have contributed a brick to SELECT’s Wall of Support include the Scottish Joint Industry Board (SJIB), Unite the Union, Electrical Safety First, The Royal Institution of Chartered Surveyors, the Scottish Association of Landlords, the Specialist Engineering Contractors’ Group and the Energy Saving Trust.

The issue is now progressing through the Scottish Parliament and a Member’s Bill is currently being prepared for discussion next year. The Scottish Government has also pledged to publish a consultation on the regulation of electricians as part of its 2019-20 Programme for Government, released in September.