Outstanding collaborations between business and arts celebrated in Edinburgh

Outstanding partnerships between the cultural and business sectors have been celebrated at Scotland’s leading Awards ceremony recognising excellence in this field. The 2015 Arts & Business Scotland (A&BS) Awards were presented last night at the Edinburgh International Conference Centre.

The first winner of a new award, created for 2015, recognising the growing number of businesses taking the creative lead in establishing and developing cultural project partnerships was revealed at the ceremony. Caledonian MacBrayne was named the first recipient of the Business Creativity Award sponsored by Inksters Solicitors for CalMac Culture. 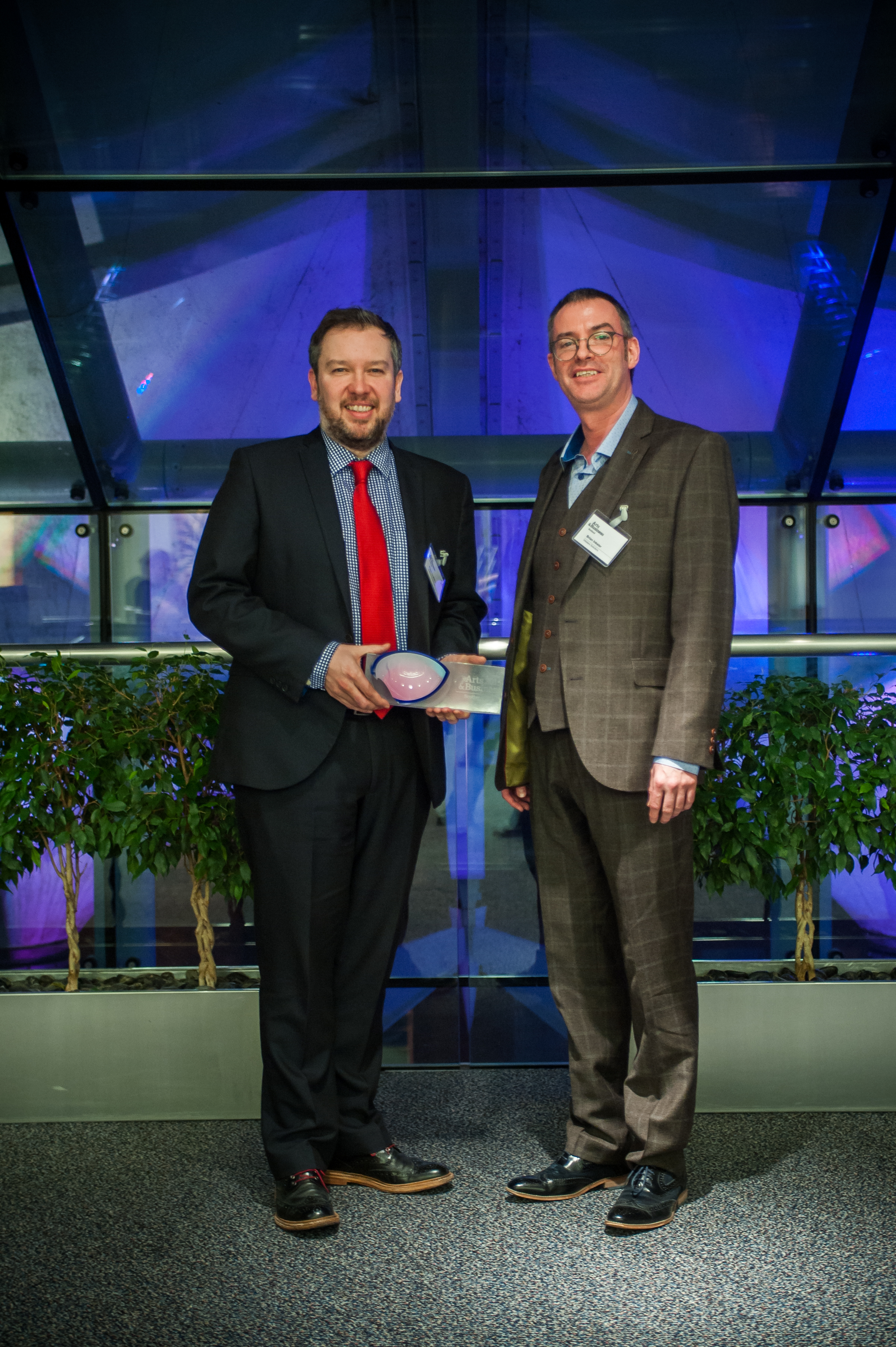 CalMac Culture, an initiative by lifeline ferry service provider CalMac, is the umbrella brand for a programme of cultural events, competitions and joint ventures across a range of strands. Its overarching aim is to champion the wealth of cultural activities available to enjoy and explore along Scotland’s west coast, and in doing so attract new and repeat visitors from a diverse visitor profile.

The coveted Leadership Award this year went to Donald MacDonald CBE, Life President of the Scottish Chamber Orchestra, for showing outstanding leadership in the arts in 2014. Commenting on his award Donald MacDonald CBE said: “It is indeed an honour to receive this lovely award. It very much reflects on the teams involved in the Scottish Chamber Orchestra, both on and off the platform, and also the creative team at the East Neuk Festival. It has been a great pleasure to be involved with such talented and committed people.”

The winners of this year’s awards received a specially commissioned awards object created by glass artists Vicky Higginson and Alan Horsley, both Artists in Residence at Edinburgh College of Art’s School of Design. In the category awards, the five winning partnerships for 2015 are:

A&BS Chief Executive, David Watt said: “The partnerships, projects and individuals celebrated at the Arts & Business Scotland Awards illustrate the appetite within the cultural and business sectors to ensure Scotland is a nation which has creativity and cultural engagement at its heart.

“This year’s winners showcase the very best of what can be achieved through partnership working across the length and breadth of the country and we are immensely proud to recognise such tremendous achievements.”

As well as being the 29th annual awards, this year also marks ten years of the New Arts Sponsorship Grants programme, run by A&BS and funded by the Scottish Government. The programme match funds business sponsorship of the arts and culture and has generated many partnerships which have gone on to win A&BS awards. The Scottish Government has just announced a further £300,000 of funding for 2016/17.

The Cabinet Secretary for Culture, Europe and External Affairs, Fiona Hyslop MSP added: “Arts and business have so much to give each other and when the two sectors collaborate they can have an enormous impact, as this year’s winners show.

“That’s why the Scottish Government has announced continued funding for the New Arts Sponsorship scheme, delivered by Arts & Business Scotland, which will encourage another year of such fruitful collaboration.”

The Placemaking category, sponsored by VisitScotland recognises a partnership that has strategically shaped the cultural activities in a specific geographical area or has contributed to an increase in cultural tourism in that defined area. Art & Living Laurieston is an art strategy developed for the area by WAVEparticle in partnership with New Gorbals Housing Association and regeneration specialist Urban Union. WAVEparticle is a Glasgow based art organisation, set up nine years ago to support and direct a team approach to large urban arts projects, public art commissions and various levels of community engagement.

The People Award sponsored by Chevron Upstream Europe, for a partnership that has used the power of culture to engage with people in the wider community, went to A1 Toys who super-powered their long-term niche partnership with Children’s Classic Concerts for their season-opener, “Monsters’ Ball”.

In the Digital Innovation category, sponsored by Accenture Scotland, it was Glasgow based recording studio LaChunky’s sponsorship of Tromolo Productions that impressed the judges with the three week run of performances of multimedia show Biding Time (remix) at the Edinburgh Fringe Festival 2014 as part of the prestigious Made In Scotland international showcase.

The Turcan Connell sponsored Entrepreneurship Award, which recognises a partnership that has developed business expertise or opportunities within the cultural organisation, went to Woodend Barn and Buchanan Food of Banchory for successfully collaborating on a year of sponsored activities designed to showcase the environmental values and sustainability practices of both organisations, and to highlight the significant role of artists and creativity within environmental learning.

The International Award is for a partnership that has supported the cultural organisation’s international activities or that has leveraged international support for the cultural activities of an organisation within Scotland. Glasgow 2014 provided the catalyst for YDance to create the first ever Commonwealth Youth Dance Festival. Along with principal sponsor Virgin Trains they brought 450 young people from all across the Commonwealth to Glasgow in style.

The Enterprising Museum Award sponsored by Museum Galleries Scotland which celebrates a museum which has shown outstanding commercial innovation was this year won jointly by Biggar & Upper Clydesdale Museum and the Scottish Maritime Museum.

Joanne Orr, Chief Executive of Museums Galleries Scotland, said: “Congratulations to Biggar and Upper Clydesdale Museum and the Scottish Maritime Museum. Their projects really exemplify the innovative and entrepreneurial work by museums across Scotland and I am delighted that their achievements are being highlighted and celebrated through the Enterprising Museum Award.”

Iain Munro, Deputy Chief Executive, Creative Scotland, added: “The partnerships shown in these awards recognise and celebrate the importance of arts and business working together for mutual benefit, whilst helping to support a thriving cultural scene for people all over Scotland.”

A series of digital fanfares to welcome the winners on stage were created by pupils from primary six at Canal View Primary School along with digital sound artist Dr Jules Rawlinson. By recording and editing sounds the children helped create an innovative and unique fanfare for each of the awards categories. Following the ceremony guests were entertained by a performance from the Edinburgh Mela Bollywood Dancers. The evening included a drinks reception and hot buffet provided by Leith’s at the EICC.