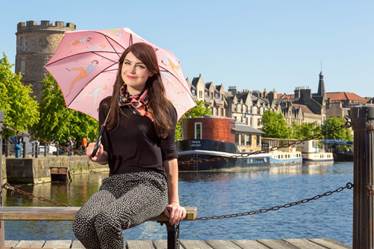 Located at Edinburgh Airport’s plaza the exhibition and shop is set to gain the biggest public audience for design in Scotland to date with a predicted footfall of over 1 million passengers in August 2016.

An event programme celebrating Scottish design will also run alongside the exhibition during August produced by Creative Edinburgh and Creative Dundee with details to be announced at a later date. The exhibition features exciting new commissions which reconsider the notion of the souvenir and respond to the theme of travel. Installed at Edinburgh Airport during the largest cultural festival in the world — The Edinburgh Festival — Local Heroes will be showcased to over one million passengers spanning 120 international destinations from the 1st to the 31st of August 2016.

Some of Scotland’s most interesting and successful designers have been commissioned to design exclusive products for Local Heroes 2016. Their work collectively represents a striking period of contemporary design in Scotland characterised by a renewed confidence and optimism. Local Heroes leaves behind stereotypes about the Scottish design aesthetic and emphasises the modern approach of contemporary designers who embrace bright colour, dynamic pattern and innovative techniques and materials.

Karen Mabon is emblematic of the designers working in Scotland that Local Heroes will celebrate during Scotland’s Year of Innovation, Architecture and Design. Karen is known around the world for her luxury scarves which are stocked in Bloomingdales, Nordstrom, Anthropology US, Harvey Nichols HK and Lane Crawford. For Local Heroes Karen was asked to create a unique souvenir and the result is an elegant umbrella ‘Rain Dance’ illustrated beautifully with dancers on every panel.

The site of the exhibition is Edinburgh Airport’s Plaza – the airport’s new front door providing a welcoming outdoor space for passengers and the public and easy access to the exhibition. The 2000m2 space incorporates the popular 27m long Edinburgh letters and a 4m television screen.