-British Transport Police will have direct access to the footage 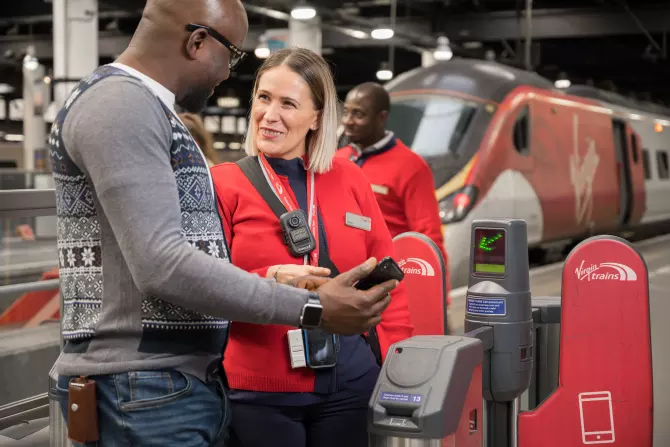 Virgin Trains has become the first UK train operator to provide body worn cameras to cover all its frontline people, resulting in assaults on staff falling by more than half.

Following a pilot scheme, Virgin Trains rolled out 275 cameras across the entire network.

Since this was completed in February 2018, assaults on Virgin Trains staff have reduced month by month, from 20 in March 2018 to 6 in September.

Results from a survey revealed that more than 80% of staff felt safer at work while wearing bodycams and nearly 90% would recommend them to colleagues.

In another first for the rail industry, Virgin Trains has given the British Transport Police direct access to footage from the cameras, if needed, thanks to a state-of-the-art cloud-based system that allows them to view the footage when the cameras are docked – speeding up investigations and possible prosecutions.

The introduction of bodycams on Virgin Trains has already led to one conviction so far, where a man pleaded guilty in June to a public order offence following an incident in April this year on a train in Wolverhampton.

Research across the rail industry showed that when rail employees at station barriers wore bodycams as part of a trial last year, physical assaults against those wearing the technology fell by almost half (47%) and assaults against all employees fell by 26%.

This trial was commissioned as part of the rail industry’s commitment to continually improve security and was conducted by the University of Cambridge with five train operators, including Virgin Trains, the British Transport Police (BTP) and the Rail Delivery Group (RDG), which represents the rail industry.

Work is now underway between rail companies and the BTP to develop a joint rollout of the technology across the country.

Lewis Komodromou, a Revenue Protection Team Leader for Virgin Trains, was assaulted by a passenger who had an invalid ticket at Euston station.

Lewis was shoved, subjected to verbal abuse and threatened. Other colleagues intervened, and the man was arrested.

The 26-year-old suffered a shoulder injury in the assault.

He said: “I was extremely shocked after the ordeal. I hadn’t really been in that type of situation before so I didn’t know how to react. Luckily my Virgin Trains colleagues were there to make sure I was okay.”

He said that the rollout has addressed the safety concerns of his team.

“My colleagues have said they feel much safer wearing the bodycams and they have more confidence in situations which could escalate. The response has been really positive,” he said. “Since the bodycams have been introduced it has stopped lots of situations that could otherwise get out of hand. The bodycams have also been great for passing on evidence needed for the BTP.”

Chief Inspector Lorna McEwan, of The British Transport Police, said: “The introduction of body worn cameras is an important step along the road in helping to ensure the safety of rail staff and passengers alike.

“Being assaulted or verbally abused simply for doing your job is completely unacceptable. No one should ever have to feel unsafe – especially when they are at work – and these cameras will help provide us with vital evidence should the inexcusable happen.

“We will continue to actively work with all rail companies to tackle this issue head on.”

“We’re proud of Britain’s railway having such a strong safety record but as an industry we are always looking at ways we can make it even safer. One assault against a rail worker is one too many. Our research shows that body cameras can make a difference — cutting assaults on staff by almost half. We’re now working together as an industry to develop plans to roll out this technology nation-wide.”