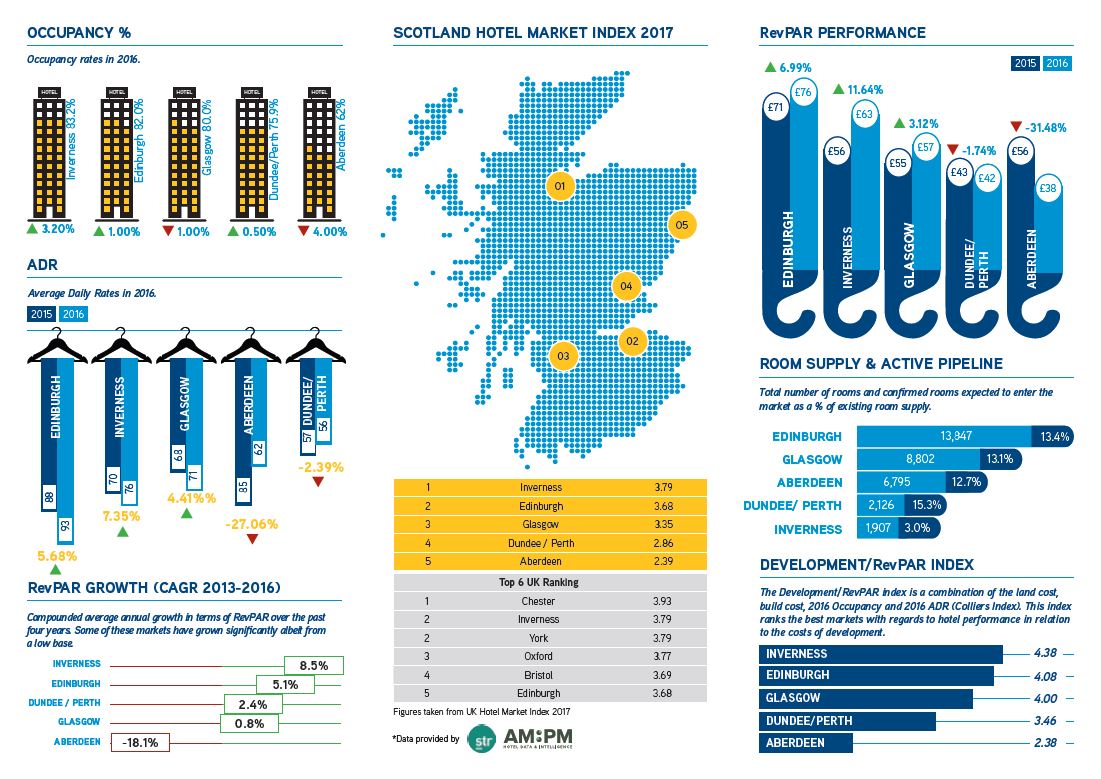 Colliers’ Scottish Hotel Index involves the analysis of five locations across Scotland and ranks them according to nine key indicators, to determine the ‘hot spots’ for hotel development and acquisition across the country. It has found that Inverness is the most attractive market for investors, followed by Edinburgh and then Glasgow, Perth and Dundee, and Aberdeen.

Marc Finney, Head of Hotels & Resorts Consulting at Colliers International, said: “Our Scottish Hotels Market Index shows the changes taking place in the sector. The study in particular, highlights that Inverness is not necessarily the best hotel market north of the border, but it is currently providing the best opportunities in Scotland. Inverness has recorded high levels of demand of around 80% over the past four years, which has enabled ADR to rise by 22% between 2013 and 2016. It is cheap to acquire hotel sites there, providing investors with much better value for money than, say, Edinburgh.”

Alistair Letham, the Scottish director in the UK Hotels Agency team at Colliers International, added: “Crucially the index shows that hotel performance is on an upward trend in Inverness, and there is little new stock of guest rooms in development. Despite being expensive, Edinburgh is also on an upward trend and has one of the highest ADR in Scotland and the UK at £93 at the end of 2016. So the capital rightly deserves its position in the UK top ten.”

Inverness scored highly and with an overall rating of 3.79, which would put it joint second in the UK, alongside York and behind Chester. Edinburgh is in 5th place in the UK Index.

Inverness led the way in the RevPAR trend, with growth of 8.5%, and also had the highest occupancy rate in the Scottish market with 83.2%.

The city also had some of the cheapest land, alongside Dundee and Perth, and Aberdeen, the smallest active pipeline at under 3% of current room supply, and relatively modest build costs. This allowed Inverness to top the table despite being rated as having only ‘moderate investor appeal’.

Due to data limitations, Dundee and Perth have been analysed as one city, and ranked fourth.

Edinburgh was second with the highest hotel KPIs in Scotland and a ‘very sought after’ investment location, helping it beat Glasgow into third. But its high land price, considerable active pipeline and lower RevPar trend kept it below Inverness for overall investment appeal.

Aberdeen was rated the lowest in Scotland with occupancy rate of 62% and a negative RevPar trend weighing against the Granite City. This is mainly due to the collapse of the oil prices and a large number of new hotel projects.

Mr Finney concluded: “Aberdeen was once the most thriving hotel market in Scotland and the UK but the downturn in oil prices and subsequent offshore activity has hit it hard. It is therefore suffering from a degree of oversupply and tough comparators from previous years. However, that is not to say that it does not have appeal to investors given the market’s potential to improve along with the fortunes of the city’s biggest industry.”

Colliers’ Scottish Hotel Index uses nine Key Performance Indicators (KPIs) to score each of the locations a figure from one to five (one being the lowest and five being the highest). The determining indices include land site prices; build costs; market appetite; valuation exit yields; room occupancy; average daily rate; room occupancy rates; four-year revenue per available room trend (RevPAR); active pipeline as a percentage of current supply and construction costs. The ratings are then consolidated into a single figure and ranked to show the markets that are ‘hot’ and those that are not, in terms of a desirable location for investors to acquire an existing hotel or develop a new one.