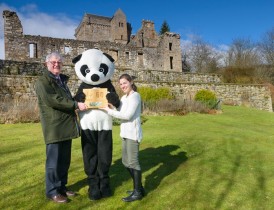 On collecting the award, David Middleton said: “I’m delighted that the hard work and dedication of our staff has been recognised by WWF in this way. It’s thanks mainly to the efforts of our climate change team and the tireless efforts of our ‘Green Champions’ at sites such as Castle Campbell, that we are gaining international recognition for our efforts to tackle the effects of climate change on the historic environment, whilst also driving behavioural changes within our own organisation to ensure we are one of the country’s lead bodies in the transition to a low-carbon economy in Scotland.”

Lang Banks, Director of WWF Scotland, said:  “I’m delighted to announce Historic Environment Scotland as our Public Body Champion for all their efforts in support of our annual Earth Hour initiative. This award clearly demonstrates the commitment of the organisation to tackling climate change and protecting our brilliant planet. We look forward to working with our newly crowned Champions for Earth Hour 2016.”

The award was presented prior to the WWF’s annual ‘Earth Hour’ initiative, which takes place on Saturday 19 March, where people across the globe will be switching off their lights for one hour (8.30 – 9.30 pm) to demonstrate that they care about the future of our wonderful planet. In Scotland, 13 Historic Environment Scotland sites will be taking part, including Edinburgh Castle, Linlithgow Palace, Glasgow Cathedral, and Castle Campbell.