Hand on heart, Ann Budge gets set for the Edinburgh Award

Entrepreneur Ann Budge has been preparing to receive the esteemed Edinburgh Award 2019. 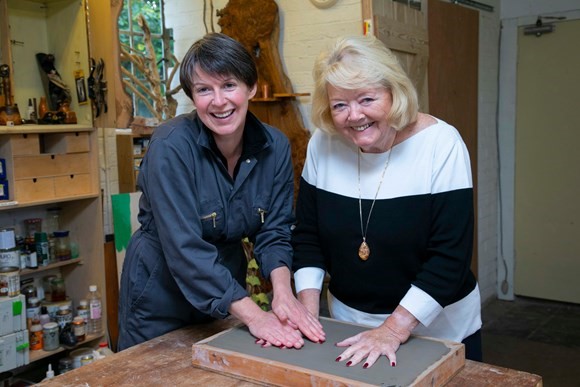 Impressions of the Heart of Midlothian Football Club owner’s hands have been cast in clay, pictured, by Leigh Bradley of the Colin Braid Stone Workshop, ready to be carved into stone.

The hand prints will be gilded and laid outside the City Chambers next to the prints of previous Edinburgh Award recipients and unveiled by the Lord Provost at a special ceremony in December.

Edinburgh’s Lord Provost Frank Ross said: “If feels apt that Ann’s hand prints will be laid so close to the Heart of Midlothian when they are immortalised in stone along our own ‘walk of fame’. As an inspiring business woman, entrepreneur, philanthropist and community champion, she really is a role model. The Edinburgh Award 2019 will be the ideal way for our city to recognise all that she has achieved.”

The West Pilton-born entrepreneur was the first woman appointed to the senior management grade in brewing company Scottish & Newcastle, before co-founding Newell & Budge, a bespoke software and IT company, headquartered here in Edinburgh.

Amongst many academic and business recognition awards, Ann was listed as a role model by the Women’s Engineering Society and inducted into the Entrepreneurial Exchange Hall of Fame in November 2013.

Ann famously bought Heart of Midlothian Football Club out of administration in 2014 and within five years has successfully transformed Tynecastle into an exemplar family and community-friendly stadium, doubling revenue and building a solid and sustainable future for the business in the process.