Prue was nominated for the role of Chancellor given the affinity of her interests and experience with the University’s expertise in food and drink, sustainable business, and creativity and culture, and well as one of its key values of social responsibility.

The new Chancellor has an impressive track record as an entrepreneur having successfully built a business from scratch in the 1960s which grew to become Leith’s Good Food, the party and event caterer. In 1969, she opened Leith’s, her famous Michelin starred restaurant, and in 1975, founded Leith’s School of Food and Wine which trains professional chefs and amateur cooks. The group reached a turnover of £15m in 1993, when she sold out all but the restaurant, which she went on to sell in 1995.

For many, Prue Leith is the epitome of classic cookery experts. With her rich culinary background, she was an obvious choice for the role of judge on the BBC’s ‘Great British Menu.’ Having been involved with the show from the first screening in 2006, Prue is a regular on our television screens where she is mainly seen putting the country’s top chefs under severe scrutiny in a bid to identify Britain’s finest dishes and its top culinary talent.

Prue has received no less than eleven honorary degrees or fellowships from UK universities, including one from Queen Margaret University in 1997. In addition, she was appointed Officer of the Order of the British Empire (OBE) in 1989 and Commander of the Order of the British Empire (CBE) in the 2010 Birthday Honours list. Echoing Queen Margaret University’s focus on making a real practical difference to people’s lives, Prue has a deep-rooted commitment to social responsibility. As Chair of the RSA, she has been instrumental in founding and running many charities including ‘Focus on Food’, which in partnership with the Soil Association, set up the Food for Life initiative which works in schools focusing on cooking and sustainability.

She has held numerous public appointments but the one she has described as the most important of her long career so far has been her role as Chair of the School Food Trust (2006 – 2010), the British Government’s campaign to replace foods high in salt, sugar and fat with freshly cooked healthy food. Her passion in this field prepares her well to act as a figurehead for Queen Margaret University’s work in food and drink, including that of the Scottish Centre for Food Development and Innovation based at the University. One of the Centre’s key roles is to help food and drink companies reformulate existing products, for example, by finding healthier alternatives to fat, salt and sugar. In addition, the Centre is helping companies with the development of leading edge functional, health enhancing products and ingredients, as well as assisting food and drink companies find new routes to the global market place.

A champion of education, Prue was a member of the National Task Force setting up National Vocational Qualifications. Some of her other public appointments include Chair of the Restaurateurs’ Association and member of a Consumer Debt Commission.

Always an optimist, Prue has strived throughout her life to make things better. She has become passionate about the care and rights of people who are dying, having witnessed her brother’s unnecessary suffering in hospital at the end of his life. She is now involved with the ‘Dignity in Dying’ campaign, believing that much work needs to be done to improve end of life care and to provide choice for those who are dying. She is therefore very interested in finding out more about Queen Margaret University’s specialist nursing research in person-centred practice, dementia and the care of older people.

Her role at Queen Margaret University is essentially a ceremonial one that she will juggle with a busy family life and writing. During the week, Prue mainly works as a novelist. She has recently completed her seventh novel, and in 2012, published her memoir ‘Relish: My Life on a Plate’. She has a rich social life, and at the weekends, enjoys spending time with her three grandchildren at her home in the Cotswolds.

Commenting on her appointment, Prue said: “ Following the wonderful Tom Farmer will not be easy, but I look forward to it. I much admire the way QMU has consistently regarded food, nutrition and health as practical and socially important (as well as academic) subjects. And I love the enthusiasm and can-do attitude of students. So I know it will be interesting and fun. And I hope I will be useful.”

Professor Petra Wend, Principal and Vice-Chancellor of Queen Margaret University, said: “Prue Leith’s career and background resonates deeply with the values and ethos of Queen Margaret University, as well as with our flagships in health and rehabilitation; creativity and culture; and sustainable business. She is a highly respected public figure who has strong beliefs about the importance of education and in its transformational importance to society. Much of her life’s work has been in food and drink, in which she has shown significant entrepreneurial qualities, but she has also worked hard to help develop and highlight the UK’s culinary talent, the importance of good healthy food for all, and to tackle inequalities. She is therefore an excellent fit for our work in food and drink, which dates back to our inception in 1875 when we were established to help improve the diet of the urban poor.

“Prue is an accomplished public speaker and writer, and is able to connect with a very wide audience, through her writing of novels, her opinion pieces and her passion for good food. We look forward to her involvement in a variety of university events such as our main graduation ceremonies, Children’s University graduations, and alumni and development events. In addition, we know that she has a keen interest in learning more about our ground-breaking nursing research in person-centred practice and care of older people, and to  help enhance our long established reputation in hospitality and tourism; business; and food, nutrition and biological sciences.”

Professor Wend concluded: “Indeed, Prue Leith has achieved so much in her varied career, ever adapting to change and embracing optimism. She is strong, motivated, entrepreneurial and ambitious, and will not only be an excellent role model for our students, but will help Queen Margaret University with our ambitious plans to be known as a ‘university of ideas and influence’.”

Prue will take over the role of Chancellor from entrepreneur, Sir Tom Farmer, who was installed as the University’s founding Chancellor in 2007 when the institution was awarded University title. 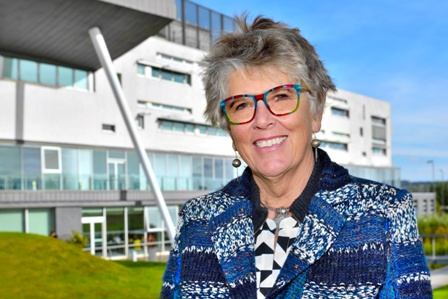